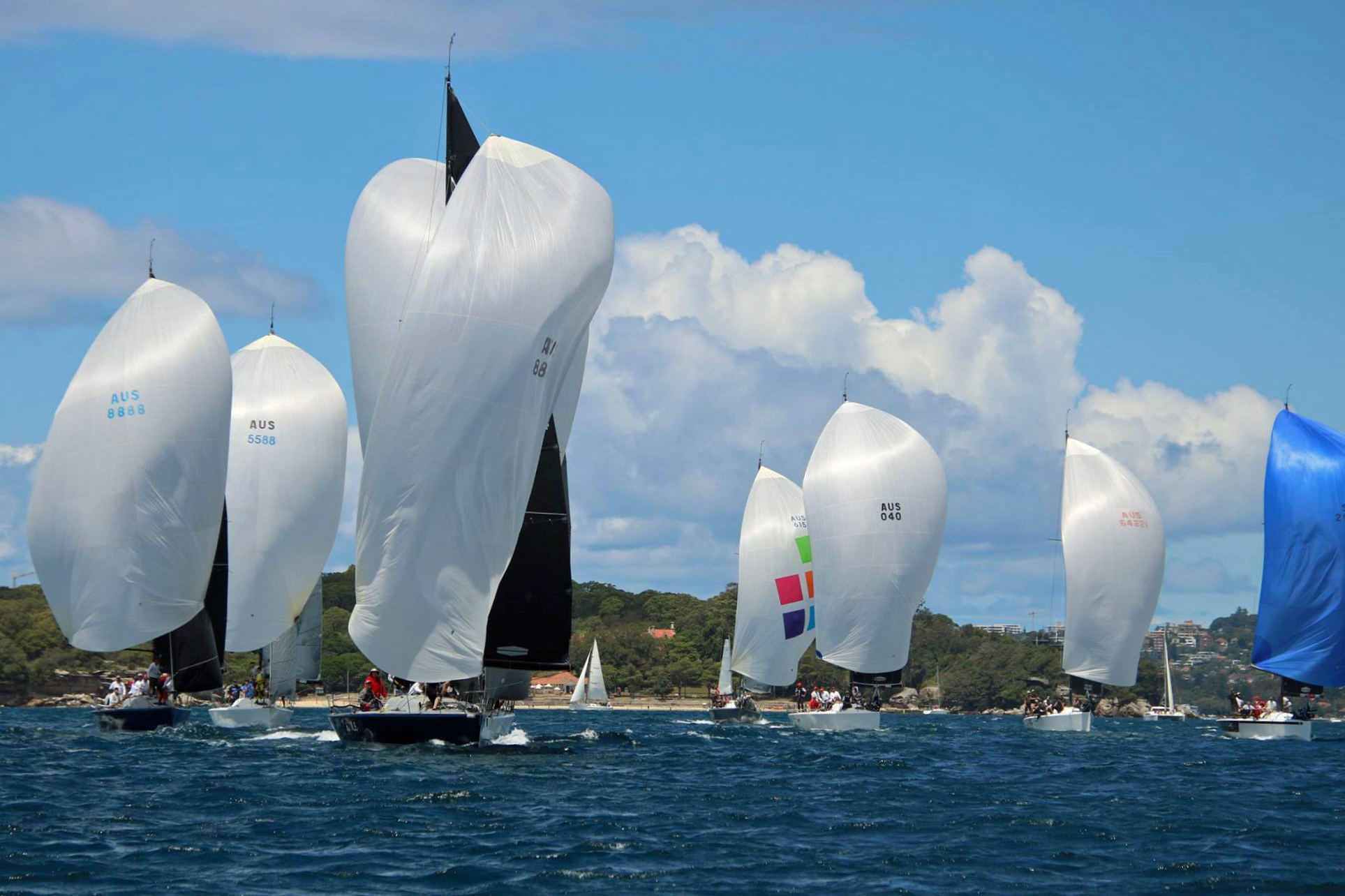 At the end of two long days and seven races in mixed conditions, a countback cliff-hanger split first and second at the Farr 40 NSW Championship which wrapped up on Sydney Harbour on Sunday February 4, 2018.

On a shifty lighter air day Hill’s crew soon learned it was less risky to take a transom or two and stay in the middle of the course between Obelisk at Mosman and Watsons Bay, race officer Phil Yeomans’ plan B following an earlier extended postponement at The Sound, between North, South and Middle Head.

“Staying in the centre worked for us, it was less risky than going right or left given the breeze,” Hill said. “Tom (Slingsby, HillPDA tactician) is a master and David (Chapman) is my Etchells tactician so I’m happy to see him doing so well on Outlaw.

“Everyone has a chance at winning; you can see by the snakes and ladders on the scoreboard. It’s the small gains, the inches you make up when you have a crew you sail with regularly. We practice hard to get the coordination right,” the triumphant team leader added.

Tom Quick was surprised to be on par with the crème de la crème sailing HillPDA Racing and takes confidence that with more than a month to prepare for the pinnacle national title in March, the Corinthian Outlaws are building a very decent campaign in their first season of Farr 40 racing.

“It was a fantastic regatta; very, very close racing,” Quick said. “We were a bit surprised with the outcome. We absolutely enjoyed the team and the event, just a great day with a great bunch of people. Everyone had a crack today, there was a lot happening on the course and the trimmers and tacticians were really tested. We are keen for a great three-day nationals. We can’t wait!”

Quick wanted to emphasise the class comradeship both on the track and at Saturday evening’s dock party at Middle Harbour Yacht Club: “The camaraderie is superb, it’s a pleasure to come sailing.”

Third overall was Sam Hill’s Forty crewed by some of the Royal Prince Alfred Yacht Club’s youth match racing team who arrived at 6am Saturday morning off the red-eye from Perth, the day after finishing up at the Warren Jones Regatta.

“I’m in my 20s and I felt like one of the old boys,” Will Ryan laughed. “We are a completely new crew on Forty; we’ve never sailed with each other before and two of them had never been on a Farr 40 before this weekend.

“Whether we go on as a youth team is in Sam’s court. The young guys did really well and hopefully they’re keen to stay on in the class. I enjoyed some family time with my sister, who I haven’t sailed with for years.”

Forty took charge at the outset on day two, posting a first then a second followed by an eighth and a sixth. “We got two right and two wrong; 50% is almost a pass isn’t it? It was tricky day, the race committee did well to get four races in,” Ryan added.

The NSW Championship is the prelude to the season-ending Farr 40 National Championship: John Calvert-Jones Trophy the Royal Sydney Yacht Squadron will conduct over three days, March 17-19, 2018.