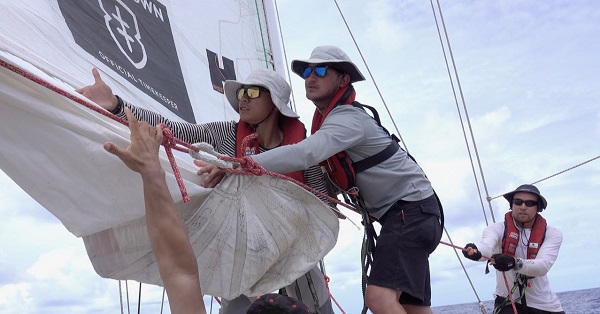 Hard at work during the Clipper Race. Photo Clipper Ventures.

Race 7: The Forever Tropical Paradise Race has served up some of the most unexpected conditions of the 2017-18 edition so far and unforecasted weather conditions have continued to challenge the fleet during the sixth day of racing.

After PSP Logistics took first position yesterday, Sanya Serenity Coast has regained top place and after nearly a week of racing and leaving the Doldrums Corridor, Skipper Wendy Tuck reports wind speeds of 35 knots overnight: “We are now sailing again so happy days, but the wind has come in a bit more than forecasted so we have been busy.”

PSP Logistics sits in second place today and is followed by Visit Seattle in third place and Garmin which sits in in fourth despite initially overshooting the Doldrums Corridor. Garmin Skipper Gaëtan Thomas explains: “Everything was going alright until we were a few hundred meters from the end of the Doldrums Corridor and our instruments recording the waypoint bugged.

“Turns out we had passed the line 20 minutes previously, so we had to gybe back and we started again in the exact position where we did cross it.”

In fifth place, but only separated from the frontrunner by around thirteen nautical miles (nm), Dare To Lead has also completed the Doldrums Corridor and has been considering the best tactical move going forward towards the Scoring Gate.

Speaking from on board, Dale says: “Exiting the Doldrums Corridor, the routing options are extremely complicated. If you turn west towards China, you will have headwinds for a long, long, time. You could also head north to the more favourable North Easterly trades, but this means crossing a massive windless area of high pressure.

“If you get tempted by the more consistent beating, you are heading towards a trap where you will not be able to cross north. All of this whilst worrying about the hopes of your team. Too many decisions to make!”

Nasdaq Skipper Rob Graham, in sixth, is looking forward to getting back underway later today: “Nasdaq is almost ready to resume sailing at the northern end of our Doldrums Corridor. The past few hours have actually been quite windy again, but all the wind (with its accompanying swell) has been on the nose, so we've had to continue motoring in order to get to the line on time.”

The Qingdao team holds seventh place today and has also been experiencing the unforecasted conditions. Skipper Chris Kobusch comments: “Instead of the forecasted south easterlies in the range of 10-15 knots, we had north westerlies blowing 20-30 knots. Earlier on we had gusts of over 40 knots and quite a steep short swell, which made life on board pretty uncomfortable.”

Unicef, currently in eighth, has made the boldest tactical decision over the last 24 hours, choosing to head east of the remote Feni Islands as the rest of the fleet keeps them to starboard. On board, Skipper Bob Beggs reports that the team is refocusing on the race ahead but is looking forward to getting to Qingdao where the temperatures will be significantly cooler.

Towards the back of the fleet, Liverpool 2018 takes ninth place with HotelPlanner.com, in tenth, some 55nm behind and eleventh placed GREAT Britain another 50nm further back.

Looking ahead, the next big tactical decision for the fleet will be deciding on the best approach to head towards the upcoming Scoring Gate. It will then be interesting, given such a compact front half of the fleet, to note which teams decide to break away from the most direct route of the rhumb line to seek the bonus points.

Teams should also notice the unpredictable weather forecast, which has made tactical decisions so difficult, ease off as weather will become more obviously driven by the larger systems and not by more localised heat effects in the Solomon Sea.

Keep up to date with progress as the teams exit the Doldrums Corridor via the Clipper Race Viewer and hear more from the Skippers and crew on the Team Pages.

Race 7: The Forever Tropical Paradise Race will finish in Sanya Serenity Marina in Sanya, and the fleet is expected to arrive between 21 – 25 February after roughly 23-27 days at sea.The crews will be excited to explore Sanya and all it has to offer during the stopover, and you can find out more here.

*All positions correct at time of writing