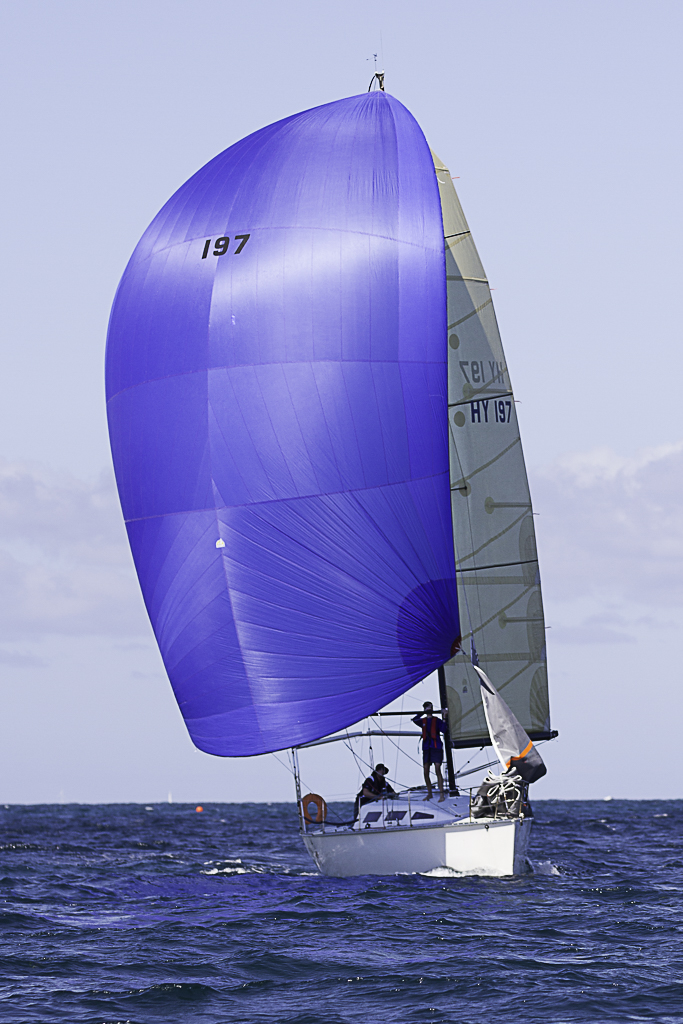 The smallest boat in the Pot of Gold weekend of offshore racing in Perth also turned out to be a giant killer when Ryan Binedell’s little S97, Low Flying Duck, sailing in the double-handed division, set the standard with a superb display of tactics and boat handling skill.

It was most obvious in Sunday morning’s windward and return race held at Hillarys. Turning the top mark narrowly behind the two leaders, low Flying Duck’s spinnaker was set and drawing while the boats ahead were still trying to hoist.

Sailing the same course as Division 2 yachts, Low Flying Duck (crewed by 17-year-old Nathan Stacey who has been sailing on the GP42 Dirty Deeds beat the corrected time of the Division 2 winner by more than a minute in the half-hour race.

During the afternoon race from Hillarys and back to Fremantle, Low Flying Duck posted an IRC corrected time that bettered the winners of both divisions 1 and 2 by a margin of more than three minutes.

The weekend of offshore racing began with a shortened race from Fremantle to Hillarys due to a forecast of very light breeze. However, winds turned out to be substantially stronger, so the race might well have been run over its original course, but such is the challenge for race committees.

Division 2 IRC honours went to Bill Henson’s Circa ahead of Wyuna and Mulberry, with the same results repeated for YAH handicaps.

Sunday morning’s schedule of two windward and return races was shortened to just one race due to light winds, but the race to Fremantle which followed was sailed in beautiful conditions, with Alan Stein’s Dirty Deeds completing the course in a little over four hours.

The Shepherdess race IRC Division 1 was won by Obsession, with Argo and Enterprise filling the minor places, while Twitch scored first place on YAH handicap, giving her the double for the weekend.

Division 2 IRC was won by Dennis Vincent’s Wyuna with Circa second and Michael Thorpe’s Soon in third.

On YAH, Bill Henson’s Circa was successful, followed by Wyuna and Soon.
But make no bones about it – the weekend belonged to the two boys on Low Flying Duck. Their talent augurs well for the future of offshore sailing in WA.