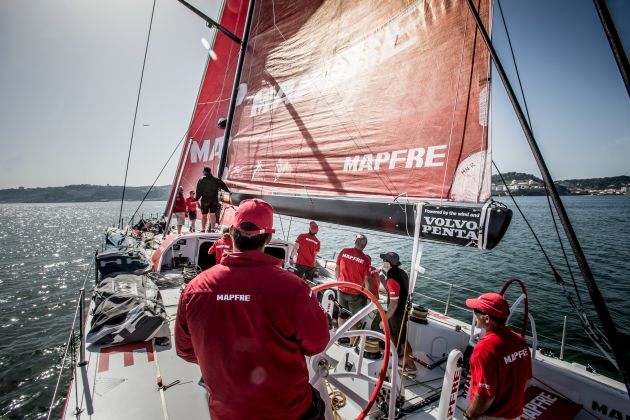 Lisbon (Portugal), 18th April 2017: Just two days after getting back on the water following the breakage of their mast (on 30th March), the VO65 MAPFRE begins their second offshore training session from Lisbon, heading out to the Atlantic Ocean and onto Sanxenxo, where the Spanish team will continue their training agenda for the Volvo Ocean Race.

“The idea is to have three consecutive days of sailing including two nights, to check all the material and try out new people on board,” explained Pablo Arrarte, the MAPFRE watch captain. “We were lucky that the incident with the mast happened close to shore and our base in Sanxenxo, and was just over a day away from the Volvo Ocean Race Boatyard in Lisbon. It means that between this session and the next, we will have made up for the days we lost at the beginning of the month”.

Having had to step a new mast on MAPFRE, almost a month and a half before expected, has enabled the definitive testing of material to begin; rigging, sails, fittings, ropes, etc, and to continue preparing the crew and the fine-tuning of the boat ahead of the Volvo Ocean Race, starting on 22nd October in Alicante.

As essential as the tyres for a Formula 1 car, the first of the three new sets of sails for this 2017-18 edition of the round-the-world-race also arrived in Lisbon, from the North Sails factory in Cuntis (Pontevedra). The new sails are different both in material and shape from the those used in the 2014-15 edition, and as such, the hours and days of lengthy testing are vital to establish the correct sailing parameters for each heading, as well as different sea and wind conditions, for the boat to be prepared one hundred per cent before October.

MAPFRE is expected to arrive at the team base in Sanxenxo (Pontevedra) around mid-afternoon on Thursday 20th April, having sailed approximately 1000 miles non-stop in the next 60/72 hours. Once back at the base, the Spanish team will reinitiate their training agenda ahead of the Volvo Ocean Race, which starts from Alicante in October this year.