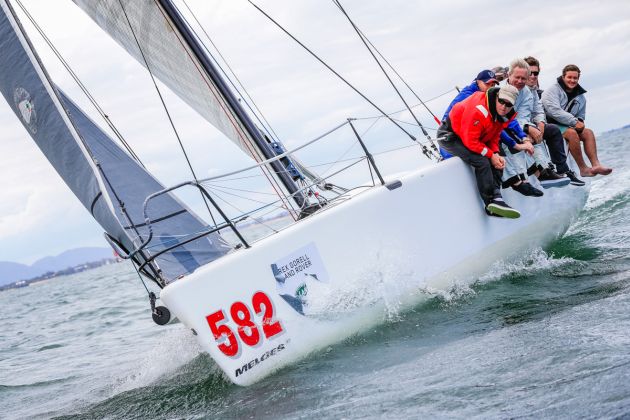 If yesterday was super Sunday, today was manic Monday with the full starting list of 276 Festival of Sails entries and every race management resource deployed on-water to see the series out for most divisions.

From 1100hrs until dusk when the twilight race off Geelong’s busy waterfront came to a finish just in time to pack up before the evening’s Australia Day fireworks, officials and volunteers ran 29 race starts across Corio Bay’s inner and outer harbours in 15 knot average sou’east breezes, gusting to 20.

Sports boats, Super 11s, VX Ones and crews on anything else that planes downhill when the spinnaker’s at full stretch were loving the express rides/ Adrian Walters’ Shaw 11m Little Nico pushed mountains of water as it flew downwind at 20 knots. That’s 37kph.

All six cruising divisions, S80s, sports boats, multihulls, classic boats and the two fleets battling for their Australian championship title in the Bausele VX One division and Morris Finance Sydney 38 division can relax and really revel in tonight’s end of regatta party at the host Royal Geelong Yacht Club.

The Rex Gorell Land Rover Rating Series divisions, Optimum Time Super 11s and Yacht Safe Performance Racing Series have to back up for one more morning session tomorrow, and should be safely back at the club before the Bureau’s afternoon strong wind warning of 20-30 knots stirs up the bay renowned for its flat-water sailing.

Full results for every division, including the two Australian championship titles decided today are at http://www.topyacht.net.au/results/2016/fos/index.htm

Progressive scores for Geoff Boettcher’s Secret Mens Business and Tony Kirby’s Patrice showed the dueling pair on equal points at the front of Rating Series IRC division 1 at the close of day two yesterday, Sunday January 24, 2016. Two more scores were added today and their worst result discarded, and amazingly the TP52 from Adelaide and the Ker 46 from Sydney are in exactly the same position this evening with just two series races remaining to create some separation.

“Today we are the same points again and tomorrow we fight it out over two windward/leewards. Winner takes all,” an arked-up Boettcher said. “It’s fantastic to have a boat like his up against us; we are pushing each other so hard. At every mark rounding we know exactly how much time we have to have on him – we are doing the maths the whole way around…you have to. We aren’t going to be nice to him anymore; tomorrow we are going to be bastards.”

Third on the pointscore is Alan Woodward’s Reverie.

Nick Bartels’ Cookson 50 Terra Firma went from third overall this morning to exiting the regatta prematurely when the foil that attaches the headsail to the boat smashed to bits in race 5.

The fun factor was off the scale in the Super 11 fleet in today’s windward/leeward and medium distance passage race.

Damian Thomas’ Melges 32 PP1, trailered from Sydney competing in its first major regatta for the new owner who’s had a big step down in size from his previous 60-footer Belle, sneakily put an end to Rod Warren’s dominant run with his J111 Joust, now second by two points.

“We did the sneaky slip-in to first,” agreed mainsheet hand Cam Dale. “Our owner/skipper is a legend, he’s just jumped in the class and we’ve probably sailed three times before the regatta.”

With Julian Newton’s Game On unbeatable in first place overall this morning, the remaining podium places were left to David Eickmeyer and Stuart Schaf’s Boatspeed 23 Scratch and Greg Scherwinski’s Sports 8, Kiss. Both had a roller coaster series with everything from first to near-last in their results. It finally came down to Scratch securing first place in the final two races, giving them second overall.
Australia Day

Weather conditions are looking mighty fine for Australia Day tomorrow, the last day of the 2016 Festival of Sails, offering plenty of action at the Shoreside Festival made possible by Geelong Connected Communities.

It wouldn’t be Australia Day without a Citizenship Ceremony, the beautiful CUB Clydesdales will make their way along the waterfront from midday and the RAAF Roulettes are set to impress festival goers with their gravity-defying stunt flyovers.

Local songstress Imogen Brough is returning to the mainstage for a second performance in the afternoon, there are two more waterski stunt shows and the amazing Bundaberg Distillatorium is open all day.