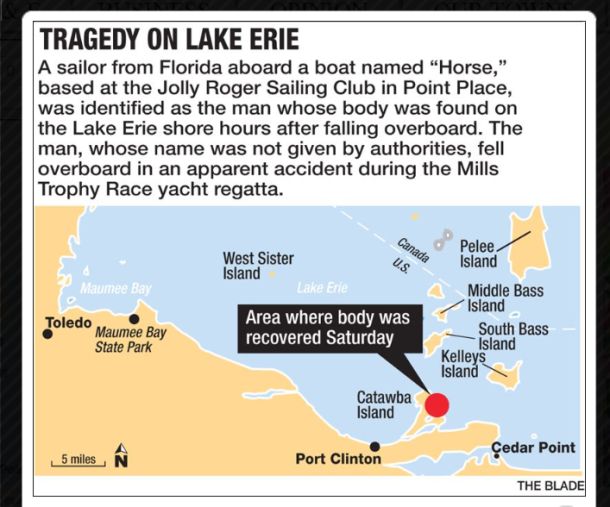 The Blade. By Roberta Gedert.

Ron Soka, the chairman of the Mills Race, confirmed that a sailor aboard a boat called “Horse,” based at the Jolly Roger Sailing Club in Point Place, was the man whose body was found at East Harbor State Park’s South Beach in Danbury Township hours after falling overboard.

“I know a boat out of Point Place was involved. I believe it was a crew member [and not the skipper],” said Mr. Soka, who added that he did not have any other details about the incident.

The body was recovered from Lake Erie shortly after sunrise by members of the Coast Guard and the Ohio Department of Natural Resources Watercraft Division.

Jason Fallon, an ODNR spokesman, released a statement describing the victim as a 65-year-old male from Malatcha, Fla., but not identifying him. The man’s disappearance was reported to ODNR at 11:30 p.m. Friday, he said.

Although an initial report to the Ottawa County Sheriff’s Office stated the missing man wore life preservers, Mr. Fallon said drowning appeared to be the likely cause of death.