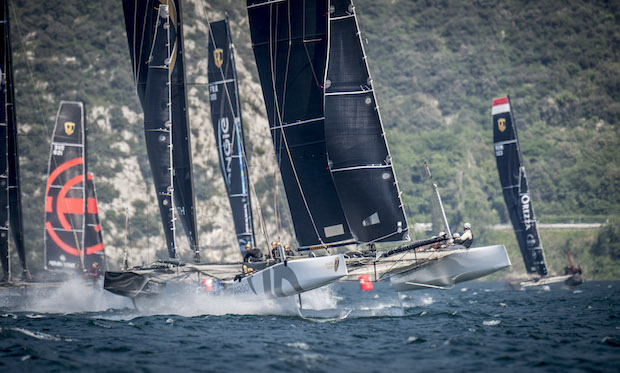 After a dramatic capsize yesterday, Malizia came out all guns blazing to win the first race on day three of the GC32 Riva Cup.

“We had a change of approach,” said Pierre Casiraghi, skipper of the crew representing Yacht Club de Monaco. “We really went for it at the start and it worked.” It’s Malizia crewman Boris Herrmann’s birthday. “This morning we said we were going for the win to celebrate Boris’s birthday and it was great to give him his birthday present on the first race of the day.”

As one of the three Owner-Drivers in the nine-boat fleet packed with Olympic medallists and Volvo Ocean Race winners, Casiraghi can be proud of his performance against the professionals. But he wasn’t the only Owner-Driver to turn on the afterburners as Jason Carroll and his Argonauts came to the fore. The American skipper of Argo didn’t quite manage to match the race win of his rival from Monaco, but Carroll still managed to notch up a 2nd and 3rd from two of today’s six high-speed, high-wind races around the top end of Lake Garda.

Argo crewman Alister Richardson couldn’t wipe the grin off his face. For the ex-49er Olympic campaigner and former Luna Rossa sailor, the GC32 at full pelt is more thrilling than an AC72. “It’s like go-cart racing,” said the Briton after coming ashore. “There’s no hesitation. Turn and burn!” At one leeward mark rounding Carroll steered the windward hull of Argo right over the top of the buoy. “Yeah, we missed it!” he yelled. There was a similar level of exuberance on board Malizia as the boat charged downwind at just in excess of 38 knots. “THIS.IS.SAILINNNNGGG!” was Casiraghi’s war cry. King Leonidas of Sparta would have been proud.

The speed is proving addictive, and even with one reef in the mainsail towards the end of the afternoon, the GC32 fleet was still flying downwind at speeds just over 35 knots. Team Tilt’s new record of 39.7 knots, set just 24 hours earlier, might not last for long.

Of greater concern to Team Tilt than a broken speed record, however, was missing out on the first two races of the day. “We had the top of one of the foils break,” said Glenn Ashby who’s doing the mainsheet trim for Sébastien Schneiter’s Swiss crew. “It dropped out the bottom of the boat and we’re not getting that one back.” Probably not, bearing in mind that Lake Garda is almost 200 fathoms deep. “We came ashore and Engie were kind enough to lend us a spare, so we got it turned around pretty quickly and got out there again. Shame to miss two races but just have to crack on with it.”

Miss two races they did, but Team Tilt’s blood was up as they shot off the start line to win the next two races. However, Franck Cammas and Norauto keep in slotting in good solid scores and Team Tilt’s absence from the race course – with no races allowed to be discarded – gives Franck and the French a 12-point cushion at the top of the leaderboard.

Meanwhile, a close battle is underway for 3rd and 4th place, as the all-star crew on board Gunvor Sailing gets to grips with its brand new GC32. The young 49er sailor Gustav Petersson is skipper of a crew that includes Olympic Champions Nathan Outteridge and Iain Percy, Volvo Ocean Race winner Luke Parkinson and super-crew Christian Kamp. “Today was so much fun,” said Petersson, “but I need to go to the gym some more. A lot more.”

Six hard back-to-back races around Garda can take its toll, but the tough guys on Gunvor showed superior stamina to win the last two heats in the strongest breeze of the afternoon. Those two wins bring the Swedes back to within striking distance of the Swiss on Armin Strom. There’s just a point in it.

Another battle ensues between two French crews duelling for 5th and 6th overall, with Spindrift racing having the slighter better day to pull 4 points ahead of Team Engie.

Tight Fight for the Owner-Driver Trophy

Both Argo and Malizia are improving at a similar rate, and the points gap sits at just 3 points apart with Team America just ahead of Monaco, and Orange Racing some way back as they still learn the ropes of the GC32.

Sunday is the final day of competition of the GC32 Riva Cup and with six races to go, plenty could yet happen on Lake Garda.