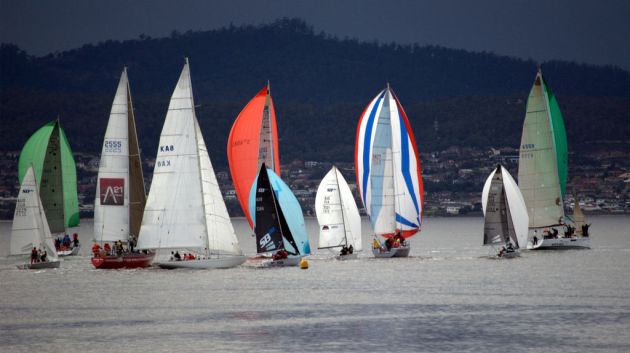 Young women learning to sail through Athena Sailing joined the crew of Graeme Wood’s Sydney 47 CR Wot’s Next in winning the opening race of the Royal Yacht Club of Tasmania’s Winter Series on the River Derwent. Wot’s Next, with Wood helming and Ollie Nicholas calling tactics, took line and handicap honours in a fleet of 16 keelboats, with the crew comprising five males and eight females.

Wood, a Sydney Hobart veteran and noted yachting benefactor, has funded the Athena Sailing whose objectives are to inspire and develop women in the sport of sailing and to introduce and empower women to be confident in this male dominated sport.

Wood has bought four SB20s to provide sail training for the women under expert guidance. Two of the boats are second-hand, but two are brand new, with the program aimed at not only teaching the women to sail, but then coaching and encouraging their dedication to the sport.

Today was the first race on a large keelboat for many of the women, with Wot’s Next powering to the lead early to finish the course a comfortable two minutes clear of the Mumm 36 Madness (Janene Frawley and Gavin Adamson).

“We had a good race, particularly on the second spinnaker run, with the tactician calling the right shots,” commented Stewart Grey who, with his wife, Kirsty, from 42 South, run the Athena Sailing Group program in association with North Sails.

In contrast to the normal late autumn/winter morning northerly, the 22 boat fleet sailed in an 8-20 knots south-westerly breeze, with race officer Biddy Badenach setting a cross-river course, with the windward mark off Peacock’s Jetty.