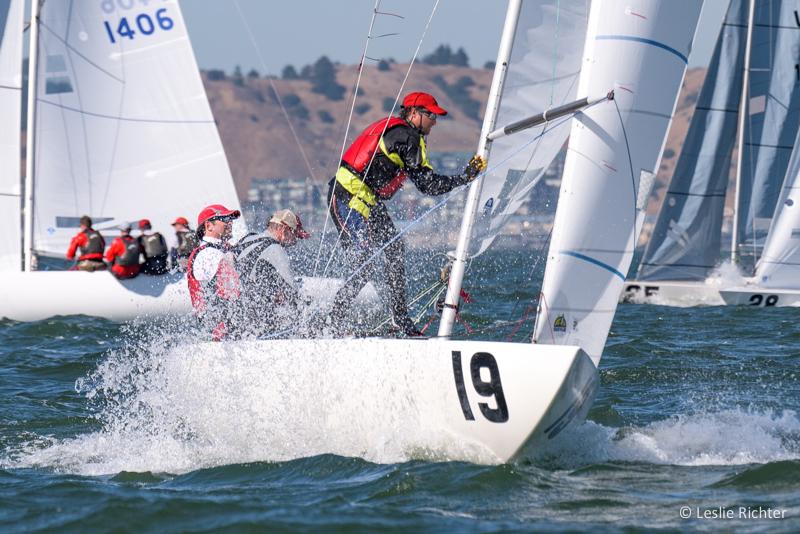 Belvedere, CA, September 26, 2017 – Day two racing began much as day one, with a two-hour postponement, although today the call was made to hold the racers on shore. When racing began at 2:20 pm the wind had filled in at 16-17 kts from a typical San Francisco Bay westerly direction of 225 degrees.

We’ll say it over and over – consistency is the name of the game in this fleet. No one understands this better that the top Corinthian team of Senet Bischoff (USA), Ben Kinney, and Clay Bischoff. After today’s two races, they lead the entire fleet with 28 points. “This is the most competitive class in the world, and we like to sail against the best sailors, pro or amateur,” said Senet. “I get to sail with my brother Clay, the best amateur sailor in the world, and my boat partner, Ben Kinney. And every time we go sailing we learn something new.” The Senet brothers were both college sailors and have done a lot of keelboat team racing over the years, but the Etchells is their preferred fleet. “I only have time for the Etchells since I spend the rest of my time driving my kids to Opti events,” quipped Senet.

Mark Thornburrow (HKG) and his all-star team of Malcolm Page, Mike Huang, and Wiley Rogers moved into second place with 33 points. Thornburrow has been sailing Etchells for 40 years, “It’s the best fleet in Hong Kong,” Thornburrow said. “This is only the second time the team has sailed together, and our new boat was delivered in May. Consistency is key, and it’s easy to have a bad race in this talented fleet.”

The day one leader, Dirk Kneulman moved into third place after a deep finish in race four. Jim Cunningham and Steve Benjamin are hot on his heels with top ten finishes today.

Racing continues tomorrow through Saturday with a total of nine races scheduled. If seven or more races are sailed there will be one throw out.