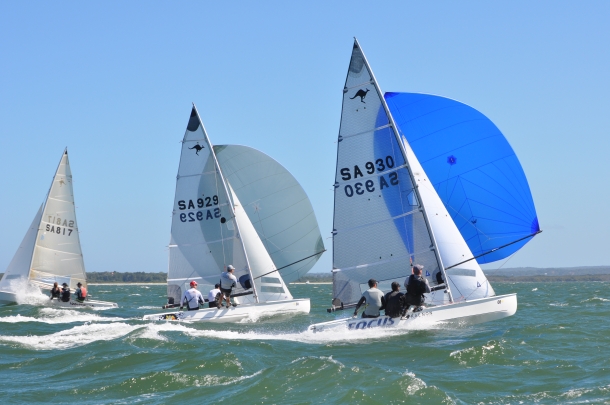 SHARPIE veteran Mal Higgins has re-written the history books claiming his seventh sharpie national title after a resounding win in front of a fleet of 42 on the waters of Botany Bay over the New year period.

Higgins, with crew Andrew Chisholm and Sam Sanderson in Focus, secured the championship with a race to spare and cruised through to a victory-lap-style win in race seven on the final day of racing.

Higgins claimed five out of the seven race wins hosted by the Georges River Sailing Club, discarding his eighth from race one with his worst carried result being a third in race six.

The regatta was mostly dominated by South Australians with Geoff McCloud in Warpig with Mark Beaumont and Sam Flint in second and Jason Heritage in Fresh Bread with James Hughes and Darren Witty in third.

However it was fantastic to see the home state of NSW pushing right up into the top echelon, the 3 (Truck, Smoke & Blur) boats locked at the top of the leader board in the NSW state titles all showing their ability to mix it with the strong South Aussie contingent. With many top 5 results along the way, this bodes well for the future of the rapidly growing fleet in NSW. With veteran Queenslander Rick Outhred turning back the clock to record a 2nd place in heat 1 and top 10 overall.

21-year-old South Australian Ryan Kelly skippering Nude with young gun crew Tom Schnaars and Sean Keen were a real stand out, finishing the regatta fifth overall and turning some heads along the way.

Other great efforts were, West Australians “All Scoobed Out” skippered by Jack Swallow winning a very competitive and large junior championship, Mikeala Sparre for winning the womens skipper trophy from 4 other teams and Todd Curry in “Truck” for winning the Country trophy beating out 19 other teams for the win.

Now with seven titles, Higgins has equaled Queensland yachting legend and sharpie class patron John Cuneo's long-standing record recognising them both as the two most successful sharpie skippers in the 72-year history of the class, in either of the heavyweight or lightweight models.

Higgins' dominance throughout the last decade has allowed him to claim six championships in the last seven nationals he has attended since 2006/7, to join his maiden title from 1999 in Nest Of Vipers at Royal Brighton (Victoria).

Although the record speaks for itself, Higgins said there was still one prize he had not achieved.

He said he still wanted to win a title in Western Australia, which was the only state he hadn't won in. The last time Higgins sailed a nationals in Western Australia was at East Fremantle in 2007/8 where he finished fourth in Blur behind winner Wade Henson in Vicious, runner up Peter Chappell in The Lizard, and hometown sparring partner Geoff “Sam” McCloud in Pig Out who finished third.

Difficulties with children's optimist sailing forced Higgins to miss last year's Western Australia nationals at Mounts Bay, which was eventually won by Chappell, however he said he hoped to return in the future to have another go.

The club itself put on a fantastic event and showed that they want Sharpies to be a key fixture in their racing at club level in the future. The committee led by Andrew McLachlan and club CEO Christine Bryant looks set to throw a lot of support behind the class and are keen to develop the Sharpies as a senior class. With over 23 boats racing consistently in Canberra, Wollongong and Sydney, it is fantastic to see such numbers and enthusiasm for the class as people realise that Sharpies really do put the fun back into sailing. With an ultra competitive fleet with many national champions from other classes getting involved the standard of racing and consistent fleet sizes puts it right near the top of the leader board for crewed high performance dinghies.

Immediate attention will now turn to the State titles in each state, with the South Australian State championships at Wallaroo on the Yorke Peninsula looking to draw a big fleet of around 25, While over in the west there has been plenty of talk about 30+ boats attending the States at Mandurah just south of Perth. NSW will continue to build with a sprint series at Georges River in mid-late feb and round 2 of the State titles looking to be on in Mid-march, with 20+ boats expected. The Victorians are showing resurgence and with a potential boatbuilding project on the horizon the fleet is set to explode, the culture the vics have bought for the past 3 seasons is really starting to take shape and transfer into boats on the water with around 15 expected at the titles on the March long weekend.

Longer term the Nationals next season will be held in Tasmania from Sandy Bay Sailing Club, from the 2nd of Jan-8th of Jan with measuring on the 31st with a huge NYE Welcome party that night. The Tasmanian fleet has grown significantly in recent years and are expecting 10-15 of their own boats, with the fleet in such a good position nationally, expect it to continue growing and we will continue to see large fleets and an unbelievable social scene for years to come.

If you are interested in getting involved in the great class, get in touch with your local state representative through www.sharpies.com.au.

It has been fantastic bringing you this event from Georges River Sailing Club and we move forward to Tassie next year. Get around it!!!