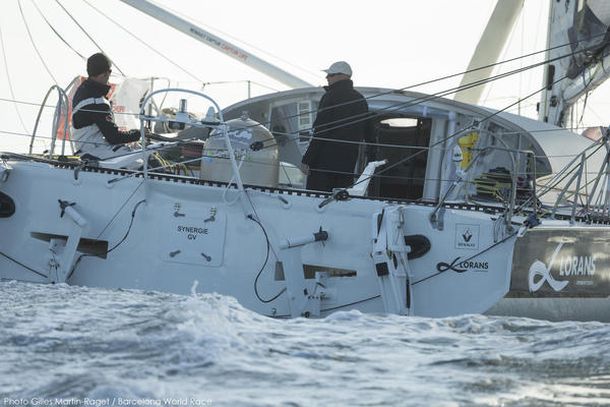 There is always a measure of relief in completing the passage of Cape Horn, escaping from the hostile Pacific into the Atlantic. But, come early Tuesday morning, it should be a especially pleased Jorg Reichers and Sébastien Audigane who bring sixth placed Renault Captur out of the Pacific and make the left turn, northwards for home.

Since leaving Wellington, NZ on February 23rd after their technical pit stop, the German-French duo have had to sail at reduced speeds because of a problem with their starboard rudder blade. But a rapidly deepening low is threatening to give them a very tough time at Cape Horn if they drop at all behind their current pace, or if the stormy low arrives ahead of forecast. It is due accelerate down the Andes and pick up strength. So theirs is a delicate race against time which will test their seamanship, and their nerves.

For Audigane, 47 today, it will be his fourth passage of Cape Horn and for Riechers it will be his first time. They were working hard today to make sure they and their boat are in the best possible state for the coming 36 hours. All things staying the same as forecast and if they can hold to their routing speed they should be in the lees of the land.

Audigane said: “For us it’s a race against the clock. If we’re quick enough we’ll get by just losing a few feathers”

Their fortunes contrast sharply with those of the race leaders Cheminées Poujoulat. Bernard Stamm and Jean Le Cam have just slowed down into the ITCZ, the Doldrums, but even so are due to pass across the Equator later this evening, back into their home, Northern Hemisphere. They have been in the south for eight weeks. Crossing the Doldrums should not be too testing for them, as the band of light winds is narrow and by tomorrow they should be comfortably into the NE'ly trade winds. There is no question of them dropping their guard down, explains the Swiss skipper in a message:
“We have a big advance but we do not lose concentration or relax.  Ahead of us there are still some areas where we could struggle and a mechanical problem just comes upon you suddenly and so vigilance prevails, the road is still long!”

Neutrogena and GAES Centros Auditivos, second and third, have seen their E'ly breeze pick up a little and can c ontemplate more regular trade winds. Now that they are in the Atlantic the pace is fast for We Are Water and One Planet, One Ocean & Pharmaton. Bruno and Willy Garcia have had the pedal down hard, racing east of the Falklands. They have been quickest of the fleet, although Spirit of Hungary – seventh – have been making a respectable 15kts, a welcome relief after three or four days in a mid Pacific 'Doldrums.'