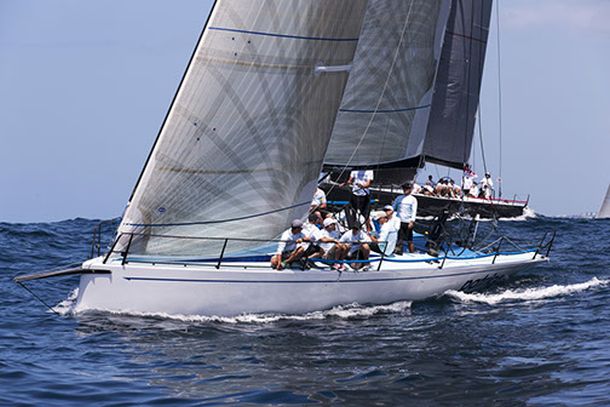 Tony Kirby and his Patrice crew dominated IRC and ORCi Division 1. Four wins and two second places resulted in an eight and a half point victory over second placed Nine Dragons, Ichi Ban finished third a further two points behind on nineteen.

“It’s good to win against competition of this calibre.”

The 10th Anniversary Sydney Habour Regatta was hosted by MHYC last weekend. With light breezes and lumpy seaway offshore,  it saw challenging conditions for the IRC Racing divisions on the first day of the two day regatta. Tony Kirby and the Patrice crew, were up against some strong competition, however claiming two bullets with a second thrown in gave the McConaghy built Ker 46 a clear three points lead over second place, at the end of the first day’s racing. “It was very wishy-washy offshore, a lot of swell. It’s some of the hardest racing I’ve done,” Tony Kirby admitted. “The race committee shortened the first windward/leeward to one-lap because it  was so lumpy with little breeze.”

With a better than anticipated forecast on Sunday, bringing in up to 20 knots, the Patrice Team showcased the Ker 46 strength across  all wind ranges, duplicating Saturdays results with another two firsts and a second, the Ker 46 reigned supreme, winning their first  regatta after their successful Rolex Sydney Hobart. “Really pleased with the outcome of the boat after the optimisation last year,  first time we sailed the boat in really light air since then and the boat felt good, all very positive” said trimmer Jason Rowed.

The McConaghy Ker 46 is going from strength to strength, with two new Ker 46’s currently in production, one for the Asian Circuit,
due to launch at the end of April, and another bound for the UK.