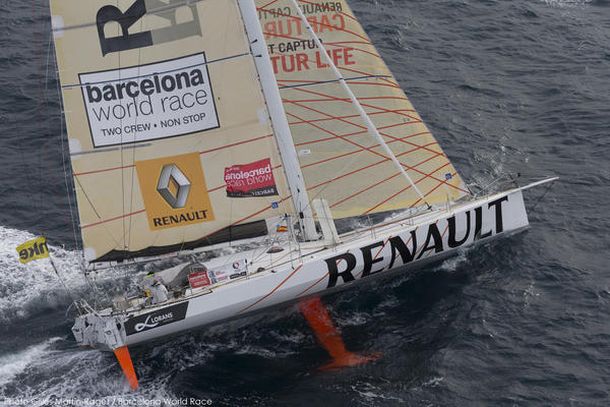 It has been a day of landmarks – both tangible and invisible – for the Barcelona World Race fleet.

For Jörg Riechers and Sébastien Audigane the landmark was very much a physical one, as Cape Horn presented the Renault Captur pair with one of the most fearsome Pacific Ocean farewells of any Barcelona World Race team.

The pair made their final approach to the tip of South America in 35-40 knot west-north-westerly winds, with severe gusts topping 60 knots. The German-French pairing benefitted from a relatively stable sea state as they rounded the Horn, although shortly afterwards conditions deteriorated with 8-metre wave heights and a very confused wave pattern.

Renault Captur passed the longitude of 67°17'35W at 11h48 UTC (12h48 in Barcelona, 08h39 in Chile), sailing just 2.5 miles off the coast of Tierra del Fuego, Chile. Renault Captur becomes the sixth team in the Barcelona World Race to pass the landmark. It was a fourth rounding for Frenchman Audigane, who celebrated his 47th birthday yesterday, whilst for his German co-skipper, 46, it was a first Horn crossing, a hugely significant moment for any ocean racer.

Speaking 24 hours before they approached the Horn, Audigane explained the difficult conditions they had forecast: “Is Cape Horn the road to hell? It could well be that for us. The tropical low to the north of Renault Captur, which has been following us since NZ is in the process of turning into a weather monster. It is running into the Andes, being forced back down south and deepening to 951mb to become a real hurricane.

“For us it’s a race against the clock. If we’re quick enough we’ll get by just losing a few feathers with winds up to 45 to 50 knots and 7m high waves.”

Previewing his fourth rounding of Horn, Audigane highlighted the importance of this legendary cape: “It is a mythical place for sailors. It was the most southerly waypoint in the maritime routes between New York and San Francisco, for instance. It is the third Cape of the round the world races, a quite particular place, with big depressions lining up, a wild place and quite hostile.”

Renault Captur took 68 days, 23 hours and 47 minutes of racing to reach the southernmost Cape (after Cape of Good Hope and Cape Leeuwin) since the start from Barcelona on December 31st, 2014. They made a 48-hour technical pit stop into Wellington, NZ, leaving on February 23rd.

Speeding across the South Atlantic

Bernard Stamm and Jean Le Cam covered approximately 4,000 miles from the tip of South America to the latitude of 0 degrees in just 12 days, 19 hours and 57 minutes, the fastest crossing of the South Atlantic yet by an IMOCA 60 – in the last edition of the Barcelona World Race Jean-Pierre Dick and Loick Peyron on Virbac Paprec 3 took 15 days, 1 hour and 50 minutes, whilst in 2009 solo sailor Francois Gabart completed the same section of ocean in 13 days 19 hours and 21 minutes.

For Le Cam and Stamm, the rapid crossing represents a significant psychological step closer to home. With around 2,800 miles theoretically left to sail, the circumnavigation is far from over, but Le Cam explained that mentally, the final miles of the North Atlantic always seem to pass much more quickly than the equivalent miles of desolate Southern Ocean.

“I've never done a round the world so quickly, that's for sure already. Bernard has yes, because he did it with Orange II [the trimaran which set a Jules Verne record in 2005], which is something else entirely,” commented Le Cam.

“We are already at the Equator and then it is always the same: when you have done a world tour and you arrive at Brazil, at the Equator, you have the impression that Europe is next door. When you travel from South Africa to Australia, New Zealand, Argentina, it is still large, long distances and then finally, when you're at the Equator and you see Europe there, just above, and you do routings, you realize that a fortnight later, you're there.”

Elsewhere in the fleet, Neutrogena and GAES Centros Auditivos, second and third placed respectively, are in the trade winds zone and have seen their boat speeds gradually pick up over the course of the day to average 10 knots.

Fourth and fifth placed We Are Water and One Planet One Ocean Pharmaton remain closely matched – this morning both sailing at over 17 knots. Willy and Bruno Garcia on We Are Water are currently fastest in the fleet, clocking up a very respectable 370 miles in the past 24 hours.

“We have quite difficult and tough conditions at the moment,” commented Fa, “Outside there is 38-48 knots of wind from the south-west, and we are making progress but it is really tough sailing. Big waves, very aggressive new waves, and a difficult life on board.”

He and Conrad Colman anticipate arriving at Cape Horn in around five days’ time, and are forecast to arrive with lighter winds and improved conditions. However, Fa, who has rounded Cape Horn three times previously, is not thinking about exiting the South – for this duo who have overcome so many obstacles the Southern Ocean could yet present them with a final challenge.

“I don’t think about the end of the South because it’s not the end. When we round Cape Horn we’ll be near the end, but we’re not there.

“Also after Cape Horn around the Falkland Islands can be tough conditions so not only until Cape Horn is passed but a couple of days after the Horn we’ll also be deep in the South and they can be very tough. So I don’t think about how it will end!”

The entire Barcelona World Race organisation are deeply saddened by the tragedy occurred in Argentina today, and would like to extend their sincere condolences to the families and friends of the sailor Florence Arthaud and the nine other victims.