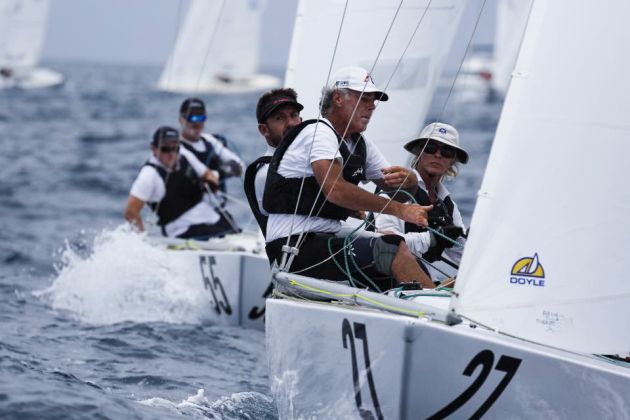 Graeme Taylor and his Magpie crew of Steve Jarvin and James Mayo sailing for Victoria’s Mornington Yacht Club posted the best scores among a who’s who of keelboat sailing to be named Etchells Australian champions for the second year running.

Taylor, Mayo and Richie Allanson won in 2016 at Royal Brighton Yacht Club. In 2017 off Palm Beach on Sydney’s northern beaches, Taylor and Mayo were joined by Steve Jarvin who cut short his skiing trip and spent five days travelling to make the final two races of the five-race one design series.

“It’s never easy at an Etchells nationals” Taylor said of the entry calibre, “you just have to chip away and eventually it comes good,” he added, while heading back to his home state with some extra luggage.

“We are very, very happy. The race committee did an amazing job, they were smart enough to know what was going on out there and try and work with the conditions. We were very glad they binned that last race, it was getting hard to get a handle on the shifts.”

On the number of general recalls and black flag starts over the shortened and very intense series Taylor said, “Everyone wants to get a good result, they are pushing hard. You do your best and sometimes things fall your way, we were lucky this time.”

“We didn’t get a win but we were always there, and it was good enough to bring us home second,” Murray said. “It was difficult out there with weather and sea conditions. Our target is the world champs in September; this is the first part of the journey. It’s the second regatta we’ve sailed and we are going up the curve.”

Murray’s America’s Cup commitments will restrict his return to sailing and in particular Etchells racing, a class he says people move on from but often return to. “We all seem to come back to the Etchells, it’s the common denominator. There a good bunch of people in the class who enjoy racing and we all rendezvous. There are some old hard heads, like us, and out there today was the RPAYC junior squad who at the other end of the learning curve and showing plenty of promise.

“I’ve got a pretty busy time coming up with the Cup, I’ll do what I can,” Murray promises. He will lead one of the Australian teams preparing for the San Francisco worlds in September 2017.

Given three of the ‘red shirts’ from the Wild Oats XI supermaxi crew picked up trophies at the Etchells major title, Murray says the pressure is now on their Oats crewmate Chris Links to perform well at the Finn nationals the Royal Motor Yacht Club Broken Bay is hosting January 16-21.

The 46-boat Etchells fleet went out on Saturday to the Palm Beach Circle where the residual sloppy seas from a big blow late Friday combined with 1-3 knot winds made offshore conditions very unpleasant. In the hope things would improve crews and officials waited patiently in the searing heat until 4pm before commencing the long journey back to the host Royal Prince Alfred Yacht Club sunburnt and without posting a score.

Offshore winds were light ENE on Sunday for races four and five. As the wind freshened to 15 knots race officer Ross Wilson attempted to start race six under a U flag but it was a general recall. The committee went straight to black flag but a major wind shift at 30 seconds to go forced a postponement, and then the time limit kicked in.

The RPAYC’s youth development team of Malcolm Parker, Clare Costanzo, Evelyn Foster and Rachel Bower grabbed the older guard’s attention in race five on Sunday afternoon when they crossed Magpie’s bow and went on to post their best result, 11th. Other YD sailors were sprinkled among the fleet.