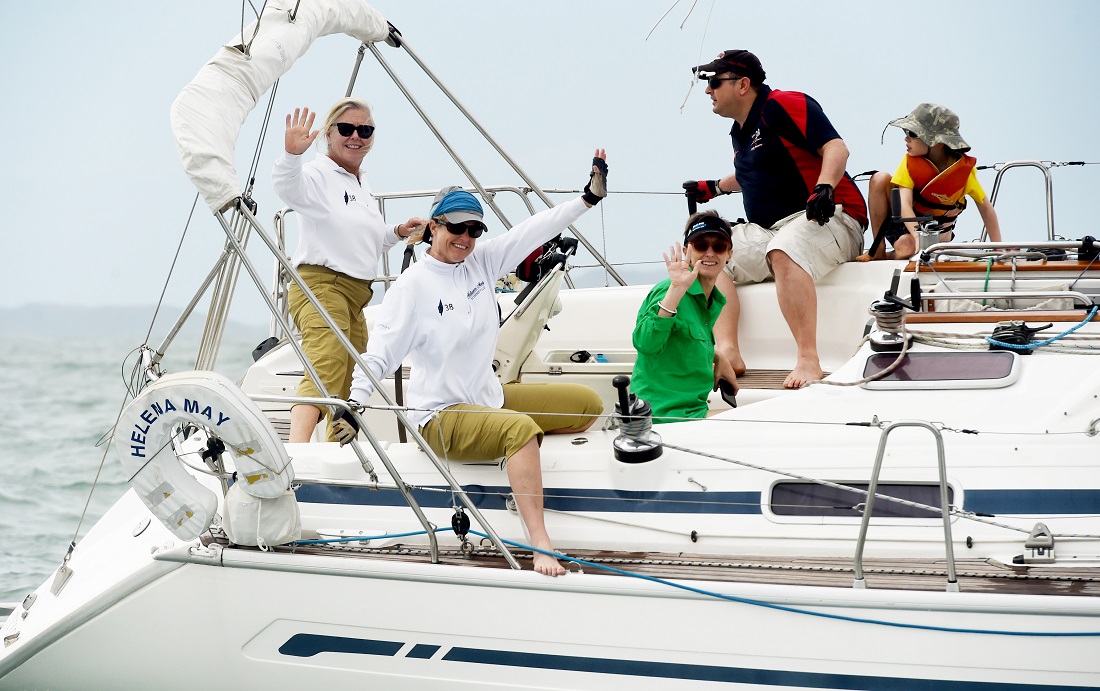 A spectacular sight awaited locals and tourists who were out and about on The Strand at Townsville, where they were treated to racing at SeaLink Magnetic Island Race Week with the Strand Race, including a leg that took competitors on a course parallel to the Strand.

Drew Carruthers made it two from two, winning the Multihull Division again with his Drew 15, Rushour. In fact, the top three finished in the same order as they did yesterday, with Graeme Etherton’s Crowther 32 Windspeed, The Boat, was second and Salacia, Ian Johnson’s Lightwave 38, third.

“The weather here is beautiful. We had an inshore race, so the sea was more settled compared to yesterday. We’re the only full-on racing multi here and I have a very good crew,” said Carruthers, who is attending Townsville Yacht Club’s (TYC) yearly event for the first time.

“When they cancelled Hamo (Hamilton Island Race Week), we already had boat up north, so thought we’d do Magnetic. We also have clients here who are sailing with us. It’s lovely here; and everyone’s relaxed and happy and here to have fun. It’s a bonus to win two races.”

In SeaLink Spinnaker Division 1, there was a bit of argy bargy on the start line, resulting in a protest between Zoe and Ponyo. In the end, Craig Watson brought home the bacon with Coopers, his Jeanneau 53.

Less than a minute separated them from second placed Crusader, the Melges 32 owned by Tasmanian couple, Brett and Jacinta Cooper. A day of Coopers, one way or the other. Yesterday’s winner, Guilty Pleasures 8 (Leon Thomas), placed third.

“I’m a Maggie virgin,” the affable Watson declared. “I’ve done 22 Hamos, and 10 Airlie Beaches, and I have to say the camaraderie and friendship here at Maggie is second to none. It’s laid back and friendly and the courses are great. And happy days, we’ve had a win!

On the course and conditions, Watson said, “It was a bit light on to start with, but it got to 15-16 knots and stayed pretty constant. We didn’t make any mistakes. We had a good spinnaker run on the run to home and got into some close encounters with Vanilla 2 (the David Perkins skippered Dufour 560 Grand Large).”

Watson said they gybed ahead of their foe to reach the finish in front. “My team is doing extremely well. I’m very happy with them. We’re here to race hard and play hard,” he said.

Cooper, who owns the Courthouse Hotel in Mullumbimby, handed SMIRW 20 cartons of Coopers beer to organisers to use for prizes today. “Coopers is the only Australian owned mainstream brewery and the Cooper family (from Adelaide) are wonderful people,” he said.

In SeaLink Spinnaker Division 2, Anastasia, Iseulta and Warrigal took the wrong mark, and realising their mistake back on land, gracefully retired. At the front end of the fleet, Lindy Sawbridge skippered Helena May to a win.

“It was the best race, a great course and so much fun. I had a seven-year-old Jackson as my sewer rat and he did a fabulous job. We also had 12-year-old Ruby and her mum aboard and took two representatives from event sponsors, Lowes Petroleum, with us. They had a ball.

“Lots of sails up and down, packing sails, lots of gybing and manoeuvres – an interesting and fun day. From seven years of competing, this is the first time Helena May has won a Yellow Hat (awarded to race winners),” Sawbridge ended.

In SeaLink Spinnaker Division 3, Fletcher Tivey was able to repair Thunder Struck’s mast, broken prior to Race 1 yesterday, and sailed his Etchells to a win.

“Yesterday, very disappointing, I felt deflated, but with help from a couple of friends on the Island and from my father, we were able to repair – one of the stays had let go. I was chuffed to win.” His parents have both Big Mama and Ragamuffin III at Magnetic, so were able to help.

“We had a really good team of people including some from the Mayfair as we work towards the Sydney Hobart. The conditions and the event have been the best. A nice south-sou’-east, swinging more east as the day went on. A typical Townsville day.

“There are four 1104’s in our division – us, Akarana, Infarrction and Vaya Con Dios. Whoever does best of the four has to buy the others drinks each day. Our shout!

“We managed to get the shy kite up early, which probably made the difference on clearing the first mark first, and we didn’t look back from there,” a pleased Webster said.

Lance Denby’s Ostara won back-to-back races so leads the Non-Spinnaker division. Today he sailed his Bavaria 38 to a win over Glenn Myler’s Thylacime One and Gavin Gourley’s Elektra.

Tomorrow is layday at SeaLink Magnetic Island Race Week, when crews, their families and friends take advantage of all the Island has to offer. Racing returns on Monday.

For full results and all information, please visit: http://www.magneticislandraceweek.com.au/