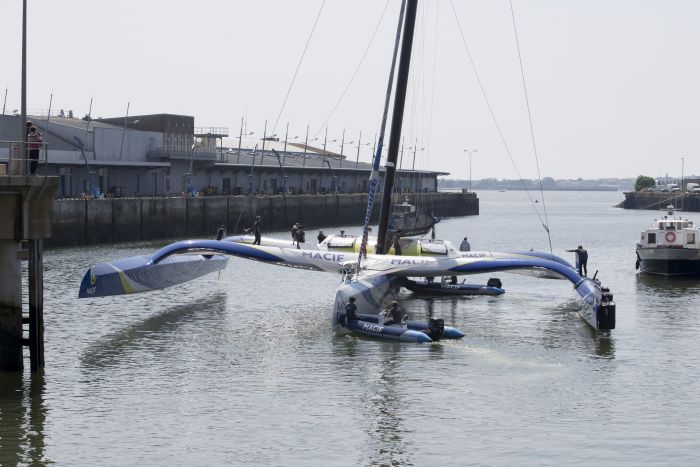 MACIF trimaran back in the water. Credit: Alexis Courcoux / Macif

Just a few days after the MACIF trimaran left the cargo ship that brought it back from Pointe-à-Pitre, in mid-January, it was sent to the yard for a refit, where it has spent nearly four months in the expert hands of the MACIF technical team. The goal was to improve the reliability of the systems that failed in the Route du Rhum and to optimize the trimaran’s performance, which returned to sea this Wednesday.

The Secret of Success Is Reliability

The winter refit concentrated on reliability and, although the results cannot be seen with the naked eye, it has certainly got rid of a few doubts.

“After the Route du Rhum,” François Gabart explains, “the Ultim’ 32/23 class teams shared their conclusions relating to the various types of damage they encountered. As some teams experienced structural damage, we decided, for example, to strengthen the MACIF trimaran’s front crossbeams. Then we also replaced the systems controlling the appendages, which were not good enough, since I lost a foil in the route du Rhum in particularly gruelling sea conditions for the boat. The systems used to raise and lower the foils are now much more reliable.”

Believed to be one of the strongest boats in the fleet – the MACIF trimaran has never had any severe damage since it was launched in 2013 – once again it has survived the reliability test.

“Do we have the most reliable boat in the fleet? I would not go so far as to judge the others. However, we really believe that we have made progress on this particular point in relation to the previous version of the MACIF trimaran that raced in the Route du Rhum.”

Some changes can be seen from the pontoon, or at least partly. To improve the MACIF trimaran’s performance, new calculations were made and the boat underwent some significant alterations, which have optimized the boat trim.

“We realized,” François Gabart continues, “that it is very interesting to sail the boat a little more 'on its nose' or flat when foiling. To achieve this, we moved the boat’s centre of gravity, by moving considerably heavy items, such as the engine for example, but also by cutting a line from aft of the central hull. This is fairly visible and I think that it is going to improve our airborne performance.”

Since it is all about foiling, the technical team also focused its attention on aerodynamics. This refit will continue until around the start of the Brest Atlantiques, on 3 November 2019, and it will involve adding an aerodynamic canvas to MACIF’s bow, over the central hull. “This should reduce the effect of drag.”

Work Still to Be Done on the Foils

The MACIF trimaran will continue to remain without a starboard foil for a few weeks. Currently being built, the new appendage will be delivered in mid-July, but this will not prevent François Gabart from training.

“We are going to begin two months of sailing with just one foil. This will not prevent us from working on various points. I’m going to continue my endeavours with the Flying Phantom and race in one or two regattas in Italy, and in particular the European Championships.

“Once the foil is in place, I will concentrate on preparing the Brest Atlantiques, doing some double-handed sailing, and also the Rolex Fastnet race, our first race on 3 August 2019. At the same time, we also have a lot of public relations dates with the Macif group,” says the skipper.

The MACIF group and its skipper have decided to demonstrate their commitment to the upcoming generations of the maritime community, by supporting L’Hermione’s 2019 topmen. Through this unique people-oriented experience, guaranteeing the transfer of skills, passion and know-how, they intend to share the values of mutual aid and solidarity, common to all maritime endeavours. This partnership will be made official at a ceremony on board L’Hermione on 13 June 2019, at the Rouen Armada.

François Gabart: “I am very proud to support the 2019 topmen. I originally come from the region of Charente and I was lucky to see this project develop when I was a teenager. My parents’ boat was moored in Rochefort, not far from the yard where L’Hermione was rebuilt. I boarded her twice and I think the idea of giving boats a new lease of life and returning them to their former glory is a wonderful idea. Naturally, together with Macif we have taken a keen interest in the project, to support it as actively as possible. I will be at the Rouen Armada on 13 June. I can’t wait to get back onto the boat”

21 June at the Bourget Air Show

When sea meets sky at the Paris Air Lab, with François Gabart and Thomas Pesquet

At the centre of the Bourget Air Show, the Paris Air Lab provides an immediate boarding space for professional visitors and the general public, dedicated to today’s innovations as well as those of the future. This year, the Paris Air Lab is the place to go to for an amazing experience and to discover the challenges of the future: climate change, artificial intelligence, future mobility, etc.

François Gabart and Thomas Pesquet will be guests at the “Amazing Meetings”. It is an opportunity for the Macif group to meet the general public in completely different surroundings. The two sailors will share their respective experiences on board the MACIF trimaran and with ESA, explaining parallel developments between the aviation and maritime industries. They will also discuss their points of view and expertise and will talk about the challenges of the future.

François Gabart: “Air and maritime navigation have much in common between. They both require fluid engineering to make progress. This is all the more the case with offshore racing and there are an increasing number of converging areas: autopilot, servo control systems, simulators, fluid mechanics, etc. Interaction with manufacturers and researchers in the aviation and aerospace industries is very rewarding and inspiring for us. I must admit being particularly interested in aviation checklists. They control all the codes and I use them for manoeuvring and starts. It will also be wonderful to see Thomas Pesquet again, who has been following us since the boat was named in 2015 and I have met him a few times since then. I hope I will be able to take him sailing with me one day or another!”

An exhibition dedicated to biodiversity and the treasures of the ocean

In keeping with its Social and Environmental Responsibility policy, Macif decided to commit itself to the protection of the environment in 2018. In 2009, it decided to take its commitment to the ocean a step further and will be at the “La Mer XXL” event in the “La Mer à préserver” (The Sea to protect) hall. Travel to the heart of the ocean through the works presented as part of the “Ocean: an unusual immersion” exhibition by the National Natural History Museum, of which MACIF is the sole patron.

Through this exhibition the group will be able to present the incredible wealth of marine biodiversity to the general public to raise awareness of environmental issues, so that we can each become involved in protecting the seas and the oceans.

Visitors will also be able to immerse themselves in the ocean racing world and enjoy a unique experience on board the MACIF trimaran, through an immersive virtual reality animation.

François Gabart: “Protecting the ocean and raising people’s awareness are subjects I feel very strongly about. I believe that everyone has a share of responsibility to try and do something important internationally. What is more, Macif has entrusted me with the role of ambassador among their employees and representatives so that we can work together to protect the oceans. On the racing side, it is a brilliant idea to install the MACIF trimaran simulator in the “La mer à préserver” (the sea to protect) hall. Not only will this help people understand how we live on board the MACIF trimaran, but it also creates a link between the sea and the general public.”