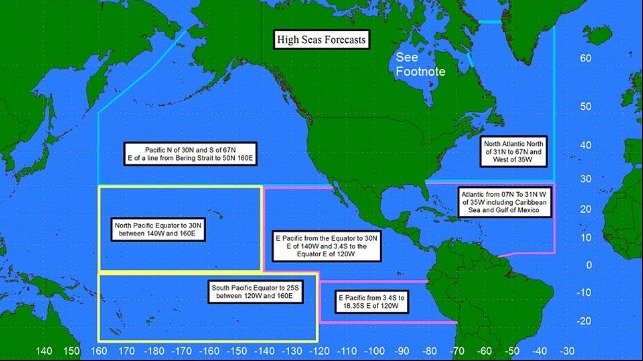 NOAA's High Seas Forecasts are weather forecasts and data transmitted around the world in real- and near-real-time.

Seafaring can be very dangerous for ships at sea. For centuries, little could be done to make shipping safer, due to the unpredictability of the weather, the vast size of the ocean and a lack of international cooperation in the open ocean. However, the 1912 sinking of the “unsinkable” Titanic, with more than 1,500 casualties, sparked global concern about safety and standards for ships at sea. This tragedy would lead to new international conventions that established safety requirements and provided more accurate and standardized weather forecasts.

Today, the World Meteorological Organization (WMO), an agency of the United Nations, provides real- or near-real-time weather forecasts and data that are transmitted around the world. The WMO's Global Observing System relies on member countries, which use their facilities on land, at sea and in space via satellites, to forecast weather conditions. Together, these resources allow meteorological and other environmental observations on a global scale.

As a member of WMO, NOAA's National Weather Service, through its Ocean Prediction Center, provides High Seas Forecasts for large areas of the U.S. Atlantic and Pacific oceans, as well as for U.S. coastal areas and the Great Lakes. The Center's Unified Surface Analysis of world weather also provides data on a complex set of surface observations. These forecasts from NOAA, as well as predictions from other member countries of the WMO, are available to anyone, and, most importantly, to all ships at sea.