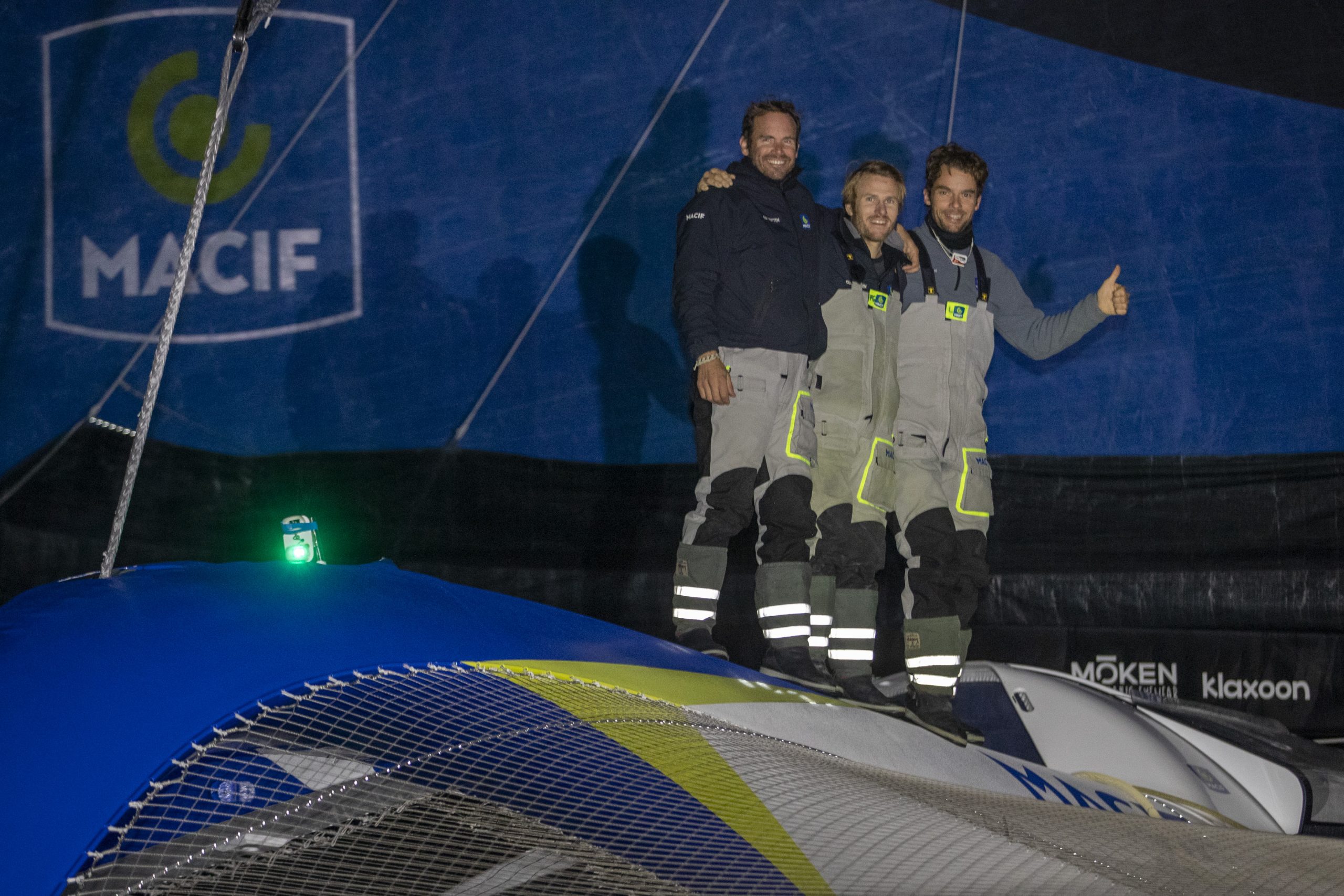 The smiles say it all on MACIF - Alexis Courcoux pic

The Brest Atlantiques race had fans glued to the website, constantly checking the latest updates over the nail-biting final hours. MACIF managed to hold on to second place, which they had been in ever since passing Cape Town, fighting off Actual Leader’s attempts to overtake.

Having past Robben Island on November 21st, 14 hours and 28 minutes behind Maxi Edmond de Rothschild, and 3 hours and 11 minutes behind Actual Leader, Gabart (36 years old) and Gahinet (35 years old) accompanied by media man Jérémie Eloy (41 years old), gradually gained on the Yves Le Blevec/Alex Pella pair along the Namibian coast, before opting for a more westerly option in the mid-South Atlantic.

A strategy which, although it meant the two skippers had to cross a front and take a considerably longer route, finally paid off, as it allowed them to reach the Northern Hemisphere 2 hours and 32 minutes ahead of Actual Leader.

“This was a good option for us, and we really have to thank our weather routing team, made up of Jean-Yves Bernot and Julien Villion. It wasn't easy, because we spent three to four days heading west, not really in the direction of Brest, but in the end, it really paid off,” Gahinet said.

“We are proud of sticking to our guns,” he ended, just after MACIF’s arrival at the pontoon in Brest on Saturday morning.

Despite two technical pit stops in Rio and then Cape Town, MACIF fought off their rivals’ attempts to overtake. In fact, François Gabart managed to keep secret for the entire month the level of damage suffered to the boat.

First, a damaged daggerboard, meaning they were unable to foil, then a central rudder which was out of action for a large part of the race. Finally, their starboard rudder became damaged when sailing along the Namibian coast.

“It was very frustrating, because you know from training how fast the boat can really go, but now it wasn't moving. It was pretty difficult to deal with,” Gabart explained.

Actual Leader completed the podium of Brest Atlantiques. Yves Le Blevec and Alex Pella, the only ones not to have made a pit-stop, completed the race in 32 days, 1 hour, 29 minutes and 22 seconds. They covered a total of 17,061 miles, at an average speed of 22.17 knots.

It was a great reward for the two skippers whose priority during this big month at sea was to preserve their boat. It certainly paid off, as it allowed them to stay in the game from start to finish.