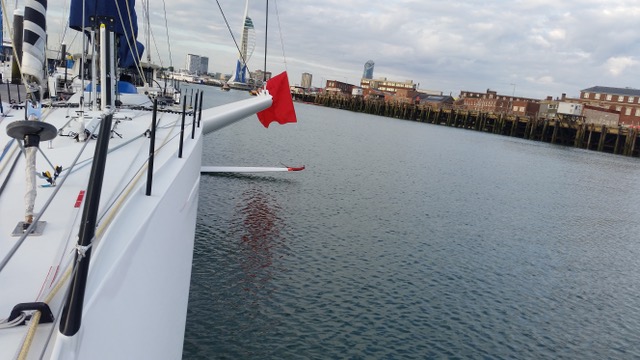 CQS and her unique appendages

After a successful sojourn in the Baltic, Ludde Ingvall’s eye catching super maxi CQS is back in Gosport on the south coast of England, preparing for Lendy Cowes Week and the Rolex Fastnet race.

During her brief tour of the Baltic Sea, CQS took line honours in the Alandia Surrsaari Race out of Helsinki, and the AF Offshore Race out of Stockholm, around Gotland Island, in which she also set a new course record.

Commenting on the visit to Scandinavian waters Ludde said, “It was good to break the record, but it was a close call, the wind went light and we nearly didn’t make it, we would like to have broken in by a bigger margin.”

Now with the boat back in England preparations are starting for the Triple Crown series during Lendy Cowes Week, and the challenging Rolex Fastnet race.

“We will be getting the boat out of the water and upgrading the rudder,” commented the skipper, “we are still learning about the boat, and the rudder upgrade will help the balance of the boat. We hope that by the time we start the Fastnet we will be up to 90% of the boat’s potential.”

CQS will contest the three race Triple Crown series on the Tuesday, Wednesday and Thursday of Lendy Cowes Week, a special series of races for super maxis organised by the Royal Yacht Squadron.

The Rolex Fastnet race starts on Sunday 6th August, and takes the fleet of over 390 boats from Cowes on the Isle of Wight, down the English Channel and around the Fastnet Rock of the south west coast of Ireland, then back to finish in Plymouth.