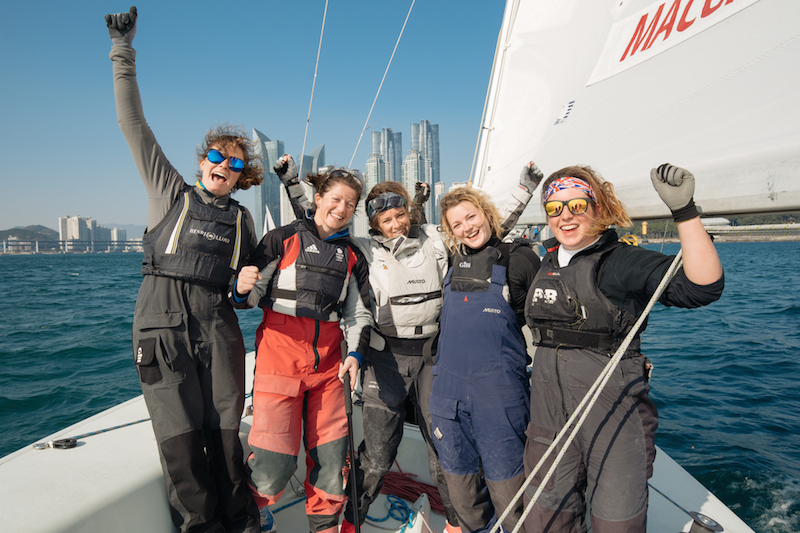 The day started with a crazy race between Lucy Macgregor (GBR) and Pauline Courtois (FRA) as the wind completely switched directions and went from as much as 15 knots down to nothing all during one race.

Macgregor was ahead by 10 boat lengths early in the race, but in the middle of the first downwind leg, the breeze flipped 180 degrees and dropped to nearly nothing.

The French still had the land breeze though, and were able to catch the Brits. They arrived at the leeward mark with Macgregor ahead by only a half boat length, and when she tacked at the mark, a strong current pushed her into the mark, so she received a penalty.

Macgregor managed to stay ahead as the wind continued to come from everywhere, but she was able to stretch just enough to take her penalty to lead around the last mark before extending to a comfortable lead.

But, halfway along the last leg, there was another 180 degree wind shift and Courtois closed quickly under spinnaker to within a few lengths before Macgregor was able to carry on ahead to the finish and earn a spot in the Finals.

In the Petit-Finals, the racing was very close. “It was very intense – close and full of action. It was fun,” said a happy Anna Ostling after returning to shore. “We had very even starts. We thought we controlled the pre-starts, but Pauline was able to start even.”

In the first race Pauline Courtois (FRA) started just to windward of Anna Ostling (SWE) and led around the first mark. “We able to pass downwind on the first run. We kept our eyes out of the boat and took advantage of a huge shift to pass” Ostling described.

The second race saw Courtois receive a penalty early in the first upwind leg for tacking too close in front of Ostling, but Courtois stayed ahead. It all came down to whether or not the French team would be able to take their penalty in time to cross the finish line ahead of the Swedes. Despite a valiant attempt by the French, the Swedes prevailed and succeeded in winning the Petit-Final 2-0 to secure third place in the event.

Going into the Finals, Team Kattnakken had not lost a race, but she was soon to be challenged by Macgregor. Prior to leaving the dock today, Lea Richter Vogelius, Team Kattnakken’s main trimmer said, “We know that both Courtois and Macgregor are excellent teams, so we will have to do our best to beat them.

“They are both excellent match racers and it will be much about boat handling out there today.”

The Finals brought the spectators some exciting match racing with all of the classic moves – dial ups, dial downs, penalties, tacking duels and luffing matches – as the teams raced within meters of each other in every race.

Current Women’s Match Racing world champion, Lucy Macgregor, showed her mettle by handing Trine Palludan her first loss of the event in the first race of the Final.

Macgregor lead off the start and both teams engaged in a fierce tacking duel up the beat and Macgregor played the shifts well to lead wire to wire. “The goal of the first match was to break the Danish winning streak” Macgregor confided. And after successfully ticking that box, she went on to say “then continue our winning streak from there. That was the aim.”

With the first goal accomplished the Brits went on to win the second start by locking the Danes out at the start and comfortably advance to match point in the Final. But Team Kattnakken still had plenty of fight left going into the third match, but maybe not enough to turn the tide on the strong British team.

“We definitely had good speed, but maybe focused too much on the small shifts and not enough on the boat positions in the big picture,” Palludan said after losing the match when Team Mac played the big shifts better, trying to turn the stinging defeat into a learning opportunity.

When Macgregor was asked about the key to beating the Danes, she said: “The crew all worked really hard today, especially the main was really hard work in the puffy conditions.

“Boat handling was really important. It was really gusty today and the shifts were super important as well. Credit to the team as that’s where we focused a lot of our effort today and won us the races.”

With this win, Macgregor becomes the first skipper to win three times in Busan. “Super happy to win here. And a big thank you to the organizers for putting on another fantastic event. We really enjoy sailing here,” concluded a happy Macgregor.

With the support of the principal sponsor, the Metropolitan City of Busan, the Busan Cup has awarded nearly one million US dollars since its inception. For this year’s tenth anniversary edition, the Busan Sailing Federation presented 50,000 USD in prize money to the twelve teams with Team Mac taking home the top prize of 10,000 USD.

As the WIM Series moves on to the final event of the year – the 2017 International Bedanne’s Cup in Tourville-la-Riviere, France December 11-16 – the points at the top of the WIM Series leaderboard are very tight with the top three only separated by 3 points. Five teams are still in the running for the WIM Series podium positions in Normandy.