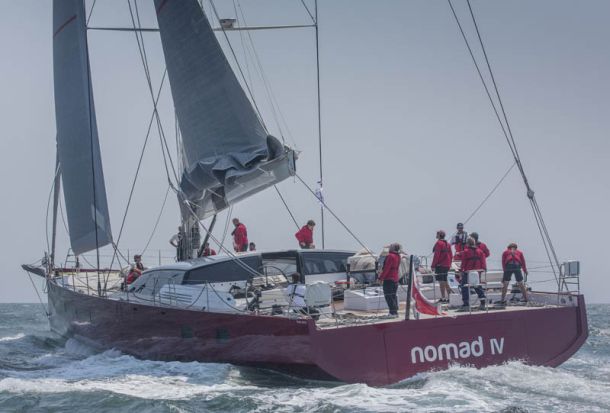 (Saturday, July 4, 2015) – Independence Day is bringing mixed reactions from the crew of Nomad IV. The 100-footft maxi is currently lying second in the battle for line honors in the Transatlantic Race 2015 behind Bryon Ehrhart's Reichel-Pugh 63 Lucky, which at present has a stranglehold on the race silverware, also leading under IRC handicap.

The dark red maxi is something of a United Nations effort. The boat was designed in France by Finot-Conq and built in Italy by Maxi Dolphin, where she was launched two years ago. Her charterer for this race is American Clarke Murphy, whose navigator, Mike Broughton is British and her strategist, Ian Budgen, is a Scot. The crew is otherwise the usual blend of Antepodians, Americans and Europeans, typical of a maxi yacht.

So what celebrations will there be on board for Independence Day? “If you sail with Budgie and Micky, it is fireworks every day!” jokes Clarke Murphy of his afterguard. “But at lunchtime today all the Yanks on board will be singing the Star Spangled Banner to ensure we celebrate our independence from the Brits and all the people of the U.K.”

At dawn this morning the topic, along with related aspects such as the Declaration of Independence and its minutiae, in particular who signed it, were drawing heated debate on board Nomad IV. “Our history teachers would have been proud of us,” said Murphy.

Back to the racing and the 20- to 30-knot strong running conditions of the last 48 hours that have torpedoed Nomad IV away from the eastern seaboard. Her racy exterior and flat topped mainsail betray a modern luxury cruising yacht with all mod cons and a displacement that is a few tons heavier than Mike Slade’s ICAP Leopard, another 100-foot maxi, which Murphy chartered for the last Transatlantic Race in 2011.

According to Mike Broughton, Nomad IV’s top 24-hour run since starting has been around 455 miles (with assistance from the Gulf Stream) while yesterday morning Aussie crewman Jake Newman notched up the boat’s record top speed of 30.62 knots.

For Murphy this is his sixth Atlantic crossing and the third in a race, following his debut on Stuart Robinson’s Swan 70 Stay Calm a decade ago, which he also sailed with Budgen and Broughton. But this year’s is the best yet: “20 to 25 knots of boat speed, hour after hour, that is about as much fun as it gets. We are having a great race. It has been amazingly flat seas and obviously great breeze and wind angles for this boat.

“The other night we were sailing at 25 to 30 knots in the dark with the spinnaker up and you had to hold on every time there was puff. So we are having a really good time in conditions the boat was designed for.”

To date the only hold-up has been a broken batten in the mainsail and some problems with the halyard locks at the top of the mast when they were trying to reef yesterday. “Al Fraser, our bowman, went up the mast which was not very pleasant in three-meter waves,” Broughton recounted. “When he was holding on, trying to sort out the halyard locks, he saw a giant manta ray following us. He said it was bigger than half of the beam of our boat, which is 7.8 meters!”

Broughton and the Nomad IV crew are not suffering too greatly. Compared to Lucky to the north—on which the crew will be hot bunking in pipecots, but otherwise living on the rail, gratefully receiving reconstituted freeze-dried meals in dogbowls—on Nomad IV there is a chef and a well-stocked larder. “We have food for a month at least and about half a ton of French cheeses. There are crates of oranges that keep coming out of the lazarette,” says Broughton, who gets to reside in a 16 by 12-foot cabin complete with en suite facilities.

This morning Nomad IV passed some 65 miles south of the southwestern corner of Point Alpha, the Ice Exclusion Zone, with Lucky due north of her. The wind was 25 knots from 250° and according to Broughton the sky had become overcast with the onset of a cold front currently to their northwest. With this, the Caribbean-like temperature crews were reporting (and occasionally even complaining about) yesterday have been dropping.

So far Nomad IV and Lucky have overtaken all but five of last Sunday’s starters. Among these, Mariette of 1915 continues to lead on the water, now with 1815 miles left to sail to the finish off southwest England’s Lizard Point. The 138-foot gaff schooner has held a northeasterly course since yesterday, hugging the perimeter of the Ice Exclusion Zone, where she is now again back into strong southwesterly winds.

Behind among the Class 40s, the largely German crew on Burkhard Keese’s Mach 40 Stella Nova has pulled out an eight-mile lead over the competition.

Sadly Robert Eichler's S&S 96 Altair has suffered boom damage, limiting the use of her mainsail and is now heading on a northwesterly course towards Nova Scotia.