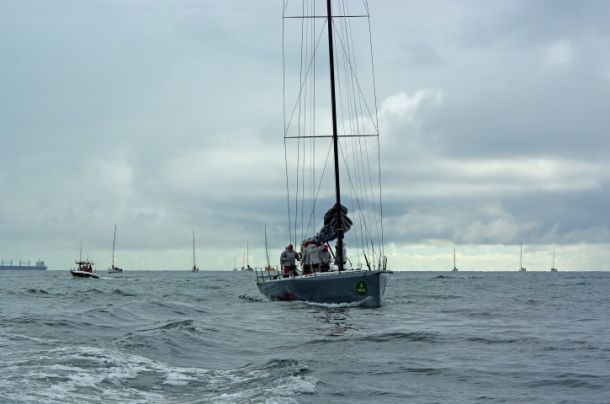 Car 54 where are you? No wind in Perth. Photo by Rick Steuart

Variable Winds prevented a start for three divisions in today’s scheduled two windward leeward races for the Pantaenius State IRC Championships on the waters off Fremantle. Fifty Four owned by Matt Dickmann, sailing with Kingsley Piesse, was the only starter and finisher in the Double Handed Division Passage Race. Cutty Wren and Dart Vader were so keen to get onto the course that they left early and never in fact made a start.

It was a beautiful morning really with low grey clouds over most of the sky eventually bringing light showers except at Cottesloe where the morning sun silhouetted the pines and twenty yachts stalking the start boat provided the entertainment for the dress circle of anchored ships on gage roads. The stage was set but one of the main players in all of this, the wind, wasn’t behaving and sometimes here in winter it doesn’t so shortly before midday the principal race officer sent them in.