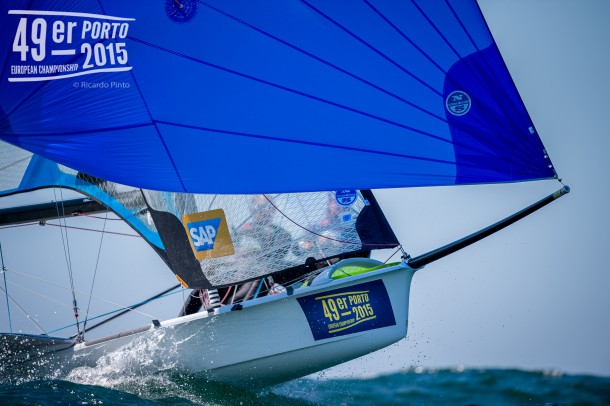 The sun rose, sailors rigged, and the 2015 49er & 49erFX European Championship started on time under blue skies, light winds, and fair swell. Two fleet of the worlds best skiff sailors took to the water to compete in the 49erFX, with the men’s 49er scheduled to start tomorrow.

The fleets were divided evenly in pedigree as the thermal breeze grew throughout the day. This championship is the second most important event of the year behind the World Championship, and decides much in the way of funding, team selection, and bragging rights.

Defending their bragging rights is a top priority for Denmark’s Ida Nielsen and Marie Olsen, who lead a star studded field of sailors. Contenders for the title include their two Danish team mates, Conti/Clapchich from Italy, Maloney/Meech from New Zealand, Echegoyen/Betanzos from Spain, Bekkering/Duetz from the Netherlands, and dozens of others from all continents of the world. There are a few absentees, however, as six teams from the America’s have been called by their nations to the Pan Am Games, and a few top teams are on shore recovering from injury.

The first races had lighter wind with teams double trapezing but surging in and out with the ocean swell, searching for power. As the sea breeze built so did the power and teams scored themselves some wild rides. It was an interesting combination of shifty and side dominated racing. At the beginning of the day there were plenty of shifts to catch, which is no easy task in a bouncing sea. As the day progressed the winning strategy became side dominated, with teams hitting the right side hard, heading up the coast line. It provided some dramatic sailing, with teams racing toward a rocky shore and cliff faces.

“It was just like racing at Garda,” said Italian contender, “Giulia Conti, the farther right the better.” Of course, the effervecent Giulia then commented she was too old for four races, with a smile and a wink of course. Fellow Contenders Stayaert and Compan (FRA) said they didn’t worry about the rocks at all, and just headed toward the breeze as best they could.

Having the best of the day was the Netherlands Annemiek Bekkering and Annette Duetz. Since taking a break early in the season this duo has been on fire, taking the wins in Delta Lloyd Regatta and Kieler Woche. Her contender status belays an odd situation whereby the Dutch Sailing Federation has already ruled her out of Olympic selection. After taking a break the duo decided to continue sailing anyways, and without any pressure yet a ton of talent they continue to be players.

Perhaps at this early stage it’s the back of the fleet that's more critical than the front. A few key teams have put themslves under early pressure in the championship, with Spain, Germany’s Gorge sisters, and NED’s Curtis all in the mid-thirties overall. Only the top 25 teams will make gold fleet and all three of those teams will be looking up the ranking to remain in the competition.

Only one Australian crew featured after injuries sidelined Eliza Solly (crew for Olivia Price) and Tess Lloyd (usually sailing with Caitlin Elks). While both recover from knee (Solly) and ankle (Lloyd) injuries, remaining Australian Sailing Squad member Haylee Outteridge is sailing this event with Caitlin Elks as crew. They are 26th after the first day with a consistent scoreline of (16), 9, 11, 14.