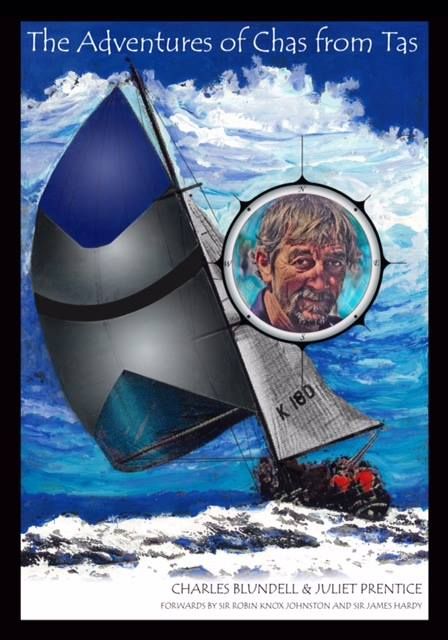 Known to yachting tragics around the globe as ‘Chas from Tas’, Charles Blundell has been telling fellow yachties for years he had a book in the offing – and Chas has silenced his critics, as the book, simply titled ‘Chas from Tas’, will finally be released in October.

Complied by Chas and a determined Juliet Prentice, whose father owned the famous English yachts 'Battle Cry’, the book chronicles his life between 1969 and the early eighties, Chas said it had taken about seven years to write, although he had been talking about it for nearly double that time. No doubt it will be a good read.

Chas, born in Devon (UK) before immigrating to Tasmania with his family, went to school in Hobart, where he learned an appreciation for the sea. A fascinating life on the water for  over 40 years, working across ocean mining, exploration vessels, submarines, delivering yachts and racing them worldwide, is reflected in his weather-beaten face.

With over 500,000 nautical miles under his belt, Chas has some fabulous yarns to tell; encounters with pirates, his numerous Sydney Hobarts, Admiral’s and Kenwood Cups and more. Most famously, Chas was aboard Drum, owned by Duran Duran front man, Simon Le Bon, when it lost its keel and capsized in horrendous weather during the 1985 Fastnet Race.

There were many illustrious names aboard Drum for that race, including Skip Novak, Bruno Peyron and Le Bon, who was to tell me on a trip to Sydney a couple of years ago of Chas using his know-how and common boat sense to help prevent a catastrophe.

Chas also caught up with Le Bon when he was in Sydney and previously joined the rest of the crew for a reunion in 2005.

Or pre-order the book at: http://www.filamentpublishing.com/shop/