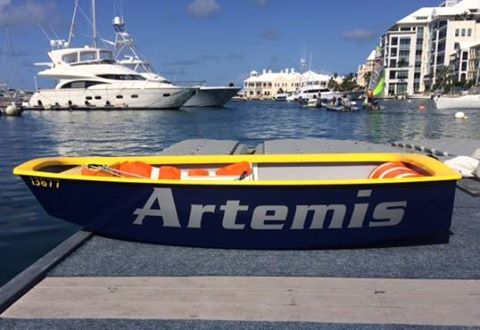 I read two heart-warming stories this week and both involved members of the Artemis America's Cup team.

From Bermuda's Royal Gazette comes the story of a stolen Optimist dinghy which has been repaired and repainted by the Artemis shore crew. The dinghy, borrowed from the Royal Bermuda Yacht Club by the West End Sailboat Club for a local sailing program called WaterWise, had been stolen by some low-life and abandoned in a cave where it sustained damage. 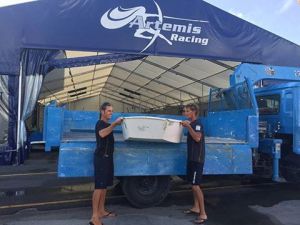 Fortunately for the West End members, the Artemis team is lodged right next door to their clubrooms on Watford Island in Somerset, Bermuda. On hearing of the damage, they promptly offered the services of their shore crew, which includes some of the world's best boatbuilders.

In no time at all, the hull damage had been repaired and the dinghy had been given a new paint job in the Artemis colours of blue and yellow. (See photo top right.)

Now I know the America's Cup “haters” will be saying things like “yeah, they can afford it” and “so they should”. I can picture one particular bloke pounding his keyboard to create another vitriolic statement along the lines that Torben Tornquist, the billionaire owner of Artemis Racing, should buy every child on the planet a new Opti, not to mention a Laser, a Hobie 14 and a complete series of personal sailing lessons from Sir Ben Ainslie.

The fact is, the Artemis guys happily volunteered to help out their neighbour and did the image of our sport a tremendous amount of good in the process.

The second story concerns the Artemis skipper and Australian Olympic gold medalists Nathan Outteridge and Iain “Goobs” Jensen. There is a nice video, which we shared on our Facebook page, about Nathan and Goobs taking 11-year-old Chelsea Williams for a ride on their 49er, handing her the tiller and showing her how to get out on the trapeze.

Chelsea had won the prize during the Bart's Bash fundraiser at Nathan's home town of Wangi Wangi on Lake Macquarie. Again, these super-busy international sailors didn't have to take time out to make a young girl's dream come true. But they did it willingly and with a smile.

It reminded me of another great story which I witnessed first-hand. It occurred at the Perth 2011 World Championships where Tom Slingsby, who would go on to the win the Olympic Laser gold medal the following year and the America's Cup the year after that, was on the beach being interviewed by the media after his victory by 200 metres over the best Laser sailors in the world.

A media boat driver whom I'd met out on the water came over and asked me if I could help his grand-son get Tom's autograph. Slingsby is always happy to talk with young sailors, so I got his attention and introduced him to the young bloke. Tom shook Kade's hand, signed an autograph, posed for a photo and chatted to him for several minutes.

I then managed to get hold of another great bloke and superb ambassador for the sport, Nick Thompson of Great Britain who had won the silver medal. Like Tom, Nick chatted to the young Laser 4.7 sailor for several minutes, asking him about his boat and his racing results.

The following week I got an email from the grandfather, saying how meeting the two superstars had really had an impact on the young bloke. He had asked if he could get the photographs of him with his heroes blown up and framed for his wall. I think they had created a sailor for life.

In every sport there are superstars like Tom, Nathan and Nick who give freely of their time to inspire the next generation. And there are others, usually “also rans” or “would be if they could be's” who think only of themselves.

In our sport we are very lucky. The vast majority of top sailors are also terrific human beings. They always find time to promote sailing in a positive manner. And they are particularly good at inspiring young sailors to enjoy their time on the water.

I guess they all hear that wonderful tune of Paul Kelly's running through their heads… “from little things, big things grow”.

Thank you Artemis, Nathan, Goobs, Tom and Nick for always giving so generously of your time and expertise.