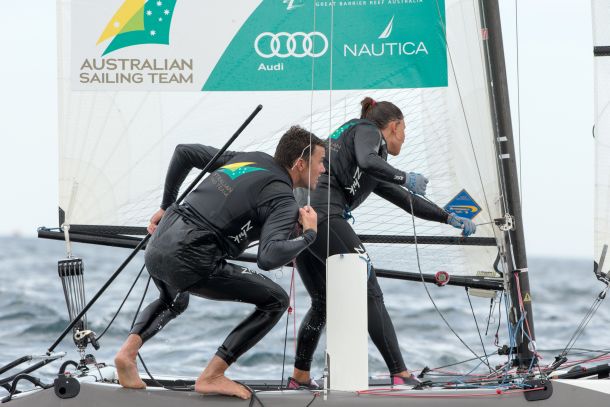 At the recent ISAF Sailing World Cup in Weymouth and Portland in June Australian Sailing Team’s 2014 World Championship bronze medallists Jason Waterhouse (NSW) and Lisa Darmanin (NSW) set the first mark by winning the gold medal, which put them into the World #1 spot on the ISAF World Rankings. But current World #4 and Olympic silver medallists Darren Bundock (NSW) and Nina Curtis (NSW) were not far behind winning bronze.

The third crew in the mix are Australian Sailing Squad’s Olympic medallist Lucinda Whitty (NSW) and Euan McNicol (NSW) who finished 13th in Weymouth and Portland. Completing the Australian contingent at Aarhus in the 69-boat fleet is Australian Sailing’s Youth Bridging team of Paul Darmanin (NSW) and Lucy Copeland (NSW).

“The weather is amazing in Aarhus Denmark with tops of 30 degrees giving us awesome sailing conditions. Lisa and I always set ourselves high expectations so we are going into this regatta with one goal, which is to become World Champions. We have a tough fleet and the conditions are suggesting a high point scoring regatta so consistency will win this regatta,” outlines Jason Waterhouse the expectations for the regatta.

After a gold medal at Weymouth and moving to the top of the World rankings the cousins will be amongst the favourites going into high-quality field including their Australian Sailing Team mates as well as current World Champions from France Billy Besson and Marie Riou.

Asked about the favourite role and the pressure coming with the internal selection battle on the road to the Rio 2016 Olympic regatta Waterhouse confidently says: “This event comes with the pressures of both Olympic and Test Event qualification, but we have learnt to sail with pressure in the past and this has to become a skill as we plan on winning a gold medal at the Olympic Games and I’m sure the pressure will be immense there.

“The plan is to keep it simple and once you put Lisa and I on the boat each day it seems to fade away and racing becomes natural. We had a great win in SWC Weymouth and are ranked number 1 in the world so I guess we are one of the favourites. We will just go sailing and see how we go!”

The Nacra 17 World Championship will run from 5-10 July with a three-day qualification series, two days of final races plus the final medal race on Friday, 10 July.