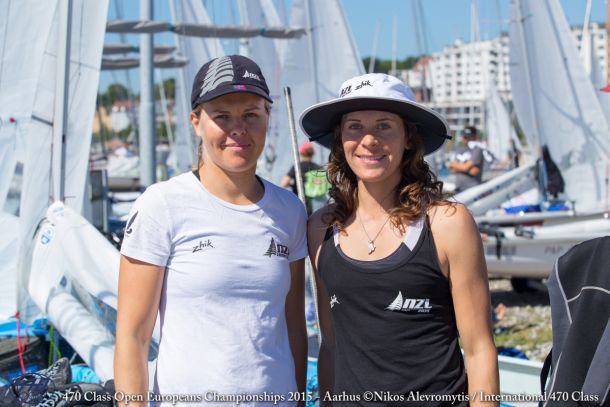 The light morning breeze looked promising, but its inconsistency soon turned the day into a waiting game under a hot Danish sun.

The 470 Men and Women gold fleets optimistically headed out to the race track first, but soon after the wind literally switched off and they were under postponement back ashore. Around an hour later, racing conditions were again looking hopeful and the fleets returned to the race track, but the fickle breeze wouldn’t stabilize and fleets again headed back. By 1700 hours it was clear the breeze was never going to materialize and the Race Committee called racing off for the day.

Disappointment for some, relief for others and one Championship title already decided.

The 2012 Olympic Champions, Jo Aleh/Polly Powrie (NZL) amassed a 24 point advantage at the front of the fleet from their back to back race wins yesterday, and even if they finish last in the double-points medal race they cannot be caught. They just need to complete a clean race and the 470 Women Open European Championship title is in their hands.

An anti-climax for the teams on the cusp of Medal Race qualification, who were hoping the closing two races of the final series would open the door to the top ten Medal Race.

470 WOMEN
With gold in the bag to New Zealand, there are still the 470 Women European Championship medals to be decided, along with second and third in the Open European leaderboard. Points are close, and the teams placed 2nd to 7th on the leaderboard are all in the mix.

Camille Lecointre/Helene Defrance (FRA) are tied on 39 points with Slovenia’s Tina Mrak/Veronika Macarol, so these teams are likely to be locked in battle for European Championship gold, whilst keeping an eye to the teams close on points behind. Mrak/Macarol took bronze in 2014, whilst Lecointre was the 2013 Open European and European Champion with her previous crew.

Déjà vu for Anne Haeger/Briana Provancha (USA) who find themselves in exactly the same position this year as last, as they enter the medal race in 4th place. In 2014, they finished 4th overall. Options for the Americans are tight, and they will be counting points all round the track.

The 10th placed team of Akiyo Yamaguchi/Eri Hatayama (JPN) will face their first ever medal race tomorrow, and the light wind day is likely to favour Yamaguchi, who prefers such conditions. Their debut appearance may just see them upgraded.

Germany’s Ferdinand Gerz/Oliver Szymanksi hold a 4 point advantage over Stuart Mcnay/David Hughes (USA), and there is then an 8 point gap to Panagotis Mantis/Pavlos Kagialis. Behind these top three, any of the next five teams can upgrade to a podium finish. Success will be a case of who dares wins.

Gerz/Szymanksi have assured themselves of a podium finish in the European Championship, but their aim is to claim the overall Open European title, then the European medals will be theirs too.

Defending 470 European Champions Luke Patience/Elliot Willis (GBR) cannot regain their title this year as the points margin is too great, but they can still claim a place on the podium.

By their standards, Mat Belcher/Will Ryan (AUS) opened the series on the backburner and will need to be radical tomorrow to defend their Open European Championship title.

About the 2015 470 Open European Championships
The 2015 470 Open European Championship is  organized by Sailing Aarhus and hostd by the Aarhus Sailing Club and Sailing Club Bugten. The event is partnered by the City of Aarhus, Sport Event Denmark and Danish Sailing Association.  In 2018 Sailing Aarhus will be hosting the ISAF Sailing World Championships together with the City of Aarhus and Sport Event Denmark. The racing format is an 11 race series scheduled for the 470 Men and 470 Women fleets, with 5 qualifying series races and 6 final series races. The top 10 teams will then advance to the final Medal Race on Saturday 4 July 2015.