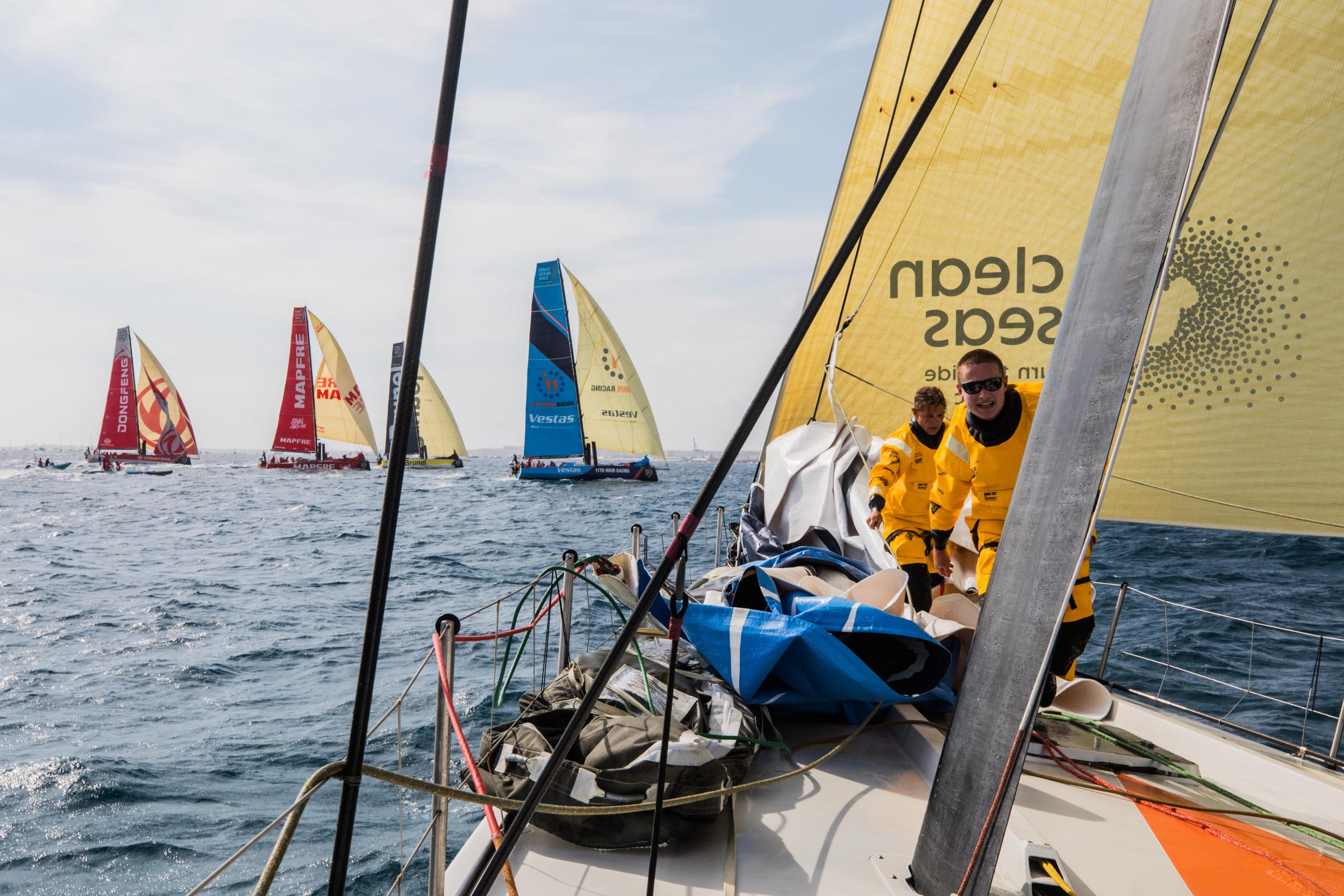 Lucas and Liz Wardley on the bow at the race start. Photo Jen Edney/Volvo Ocean Race.

Finally, the racing has started, in fact we’ve completed the first leg from Alicante to Lisbon. And we’ve had a small taste of what lies ahead. Although it feels a little strange to be back here in Lisbon, it’s almost as though we’re here doing another Prologue race. Leg one was revealing, we learned a lot and it was exciting to be racing for real.

It’s hard to describe how thrilling the the start was, the atmosphere around the race village was electric with thousands of fans, friends and family to wish us off and Alicante certainly put on a show.

I couldn’t count how many times I have visualized myself at the start of a Volvo, doing the training, the mental prep and then to have it happen was truly amazing. I kept looking around and literally asking myself ‘is this really happening’. On the dock were my mum and dad, who have played a huge part in me getting here, and I could see they were a little emotional.

It was pretty special for dad I think, he taught me how to sail and for me he’s been a great figure to look up to for my sailing, particularly as he competed in the Whitbread race in 1985. He speaks of different times in this race, celestial navigation, open designed boats and it took them 42 days to get to Cape Town! We should do that in almost half the time.

My partner Emily, along with her mum and uncle, were also there plus I had four friends travel from Italy to see me off. It makes a huge difference to have the support and I think that’s part of what makes this race so special.

To the racing. The in-port course had us doing a few laps around some marks before heading offshore. We had a decent start and held our position around the cans, the main thing was that we got around the course with minimal mistakes and stayed out of trouble.

After turning the leaving mark, we were met with a wall of spectator boats, we had another competitor pushing us up and it looked like we had nowhere to go. It was one of the scariest situations I’ve been in, a spectator boat with some screaming fans were just centimeters away from potentially ending our race, moments after the start. Thankfully our skipper Dee Caffari managed to pick a gap and work through it.

After the hectic start, it was nice to settle the boat in and take in the surrounds. We were keeping up well with the fleet and watching Alicante disappear into the sunset brought up mixed emotions. It was great to be on our way, but also a little sad after such a fantastic build up with family and friends.

The first two nights were pretty typical Mediterranean sailing, some light wind spots to get through before approaching Gibraltar. As we knew from the Prologue race, the acceleration of the wind through the straight could be intense, so this time we were ready.

At first the wind wasn’t so strong at around 20Kts. We had about 4-5 gybes between the coast and the traffic separation lanes and then the wind increased. Soon we were in about 30 to 35kts and now we had the wrong sail up. We were still on our biggest downwind sail, which was outside its wind range.

It’s a funny mindset sometimes with sail choice, often people think the bigger the sail the faster you go, but in these conditions it’s the opposite. The bigger sail makes it harder to drive and often more dangerous.

Ok so now we’re doing 25-30kts of boat speed, with 35kts of wind and a steep seaway. My watch captain Martin Strömberg turns to me and says “you ready to drive mate”. Right…here we go, I’m on! Like driving a formula one car at max speed, but at night and on a bumpy road!

20 minutes go by, all going well, touching on 30 kts of boat speed, then, all the numbers go out. Instead of showing numbers vital to keeping us on course and to stop us wiping out, we’ve got flat lines showing… great. Now I’m doing 30 kts down waves with no numbers, in the dark! The adrenaline is pumping to say the least, my hands gripped tighter than glue to the wheel and I remember thinking “this is a taste of what’s to come in the Southern Ocean”. This went on for about 40 minutes, driving just on feel, while Liz Wardley our Boat Captain put on her electricity hat and fixed the issue.

Coming off the wheel after this stint I was a little tired, I think the extra concentration drains your energy more, but more gybes to stay in the stronger winds meant no sleep. In intense situations our usual watch system of four hours on, four off gets thrown out the window, most of the time the whole crew are on deck or just down below on standby, ready to go.

I’d be laying half in my bunk, with my gear on soaking wet, just drifting off to sleep …you know that feeling where you just surrender to the fatigue, blissful rest takes its place…except then you get called on deck for a gybe. It’s a five minute session of lugging the wet heavy sails across and then grinding like hell to gybe, then you stumble back down below and collapse in your bunk.

We did eventually set up on a longer gybe and the wind decreased so we got some much-needed sleep. Finally a full off watch, it’s amazing the difference it makes to your state of mind.

Heading to our rounding mark we were in a pack of four matching speed and trying to make all the small gains. Keeping a close eye on the AIS for the boats in sight is vital in these circumstances, often someone reading the numbers keeps the driving and trimming in check.

We rounded the mark of Madeira at night, was nice to see all the lights but I still don’t know what it looks like in the daylight. Unfortunately, we lost a little time to a few boats closing in on the island, so it was back on the chase to catch up. It is surprising how much it effects your mood when you hear the position report come in. Sometimes I’d think ‘no way how did they gain so much on us’.

The mental part is so important. I’d keep reminding myself it’s not over until you cross the line and in this race, it’s about the long-term gains, not getting bogged down by small losses. We managed to make some big gains into Brunel, however the others in our group were able to slip just out of reach and the lead boats got richer and the following group got poorer. It came down to a 400 mile drag race with Brunel, within sight for just over two days.

Really this was perfect two boat testing for us, we were able to try out a few different set-ups, always looking for the small gains to make that extra 0.2kts boat speed. Its intense and almost as draining, driving like this. You’re constantly being told you’re a little faster, or a little slower than the other boat and its takes every bit of concentration to keep the boat at its maximum.

The approach to Lisbon was our last chance to strike. 24 hours before we had been in front of Team Brunel, we were now 0.6 miles behind them. As we approached the finish we knew the wind was going to stop and we would be floating up the river to the finish line with a certain amount of luck involved. Fortunately, so long as we arrived before 2200hrs, we would have a favorable tide pushing us over the line. But we were really pushing against the clock.

We reduced the deficit on Brunel and it came down to the final few minutes. A nail biter but they just managed to get into a small puff of breeze and drift over the line only meters in front. I felt frustrated and more disappointed than I might have expected. We were so close and in front for much of the race. I keep thinking, what if we did this or that and pushed a little harder here or there, all those small losses add up and so on.

It wasn’t the result we wanted as a team but we are happy to have been racing in sight of other boats for the whole leg. Lots of valuable learning had and I feel we’ll continue to improve. We certainly have plenty of chances to put what we learn into practice, there is a very long way to go.

– Lucas Chapman/Turn the Tide on Plastic