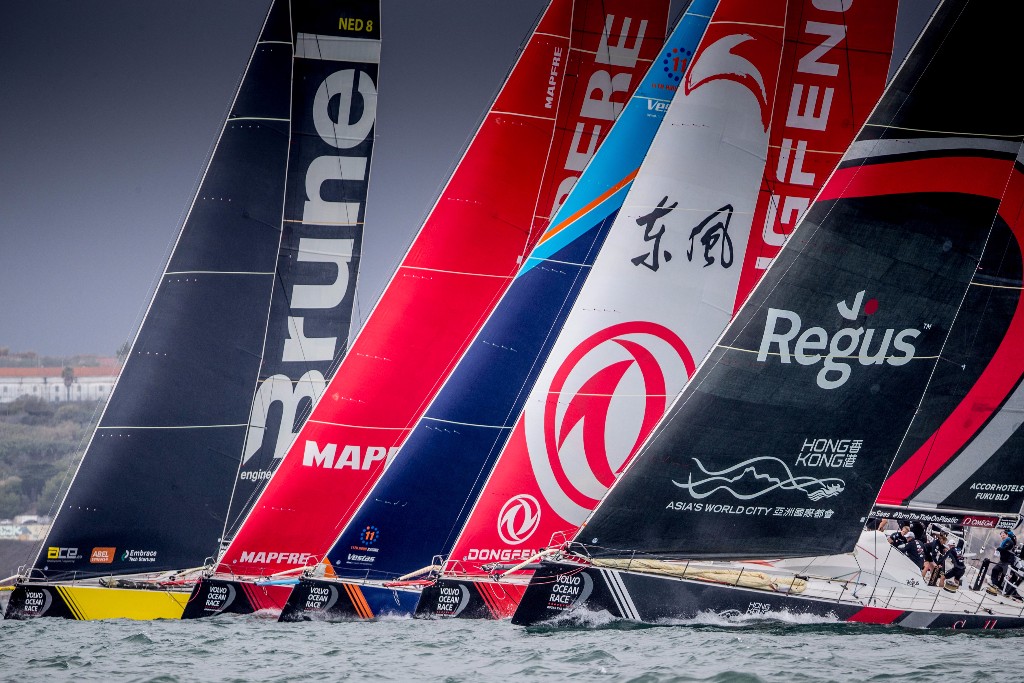 At last the Volvo Ocean Race 2017-18 is getting down to business. After the training build-up, the official Prologue and the coastal racing of Leg 1, the fleet is about to test its mettle during three weeks in the Atlantic and Dongfeng Race Team is raring to go.

At a nominal 7,000 nautical miles, Leg 2 from Lisbon to Cape Town, which sets sail at 1400 local time on Sunday, is the second longest of the entire race and undoubtedly one of the toughest and most difficult in terms of strategy and weather.

The weather forecast is calling for an exciting start from Lisbon and then a rip-roaring opening phase as the fleet surfs downwind to the Equator before strong northerly winds that could see the first boats at the Doldrums in under eight days.

Charles Caudrelier, the skipper of Dongfeng Race Team sponsored by Dongfeng Motor Corporation, loves this marathon stage that takes the fleet south across the Azores High and the St Helena High and into the northern fringes of the Southern Ocean.

“I’m really excited about this one,” he said at the Dongfeng pavilion in the Volvo Ocean Race village in Lisbon as the team completed its final preparations. “This is one of my favourites. You set sail with trade winds, then come the Doldrums. It’s always interesting north of the Equator, and in the south Atlantic too.”

This time navigators have a free rein without the usual waypoint on the course at the Brazilian island of Fernando de Noronha. That means total freedom to choose your route to Cape Town with the attendant risks of being dropped by the peloton but also the opportunity to steal a march on your rivals.

Caudrelier knows that the final stages of this leg – often thought of as being dominated by light winds – can be punishing on boats and crew. “I remember in the past finishing this leg by sailing north, upwind, which is very difficult, because you can really damage the boat. But that opens up the game. It’s going to be interesting, so I’m excited. For me, this is the best leg of the race.”

After a challenging first leg from Alicante to Lisbon which saw Dongfeng Race Team fight hard to recover from early setbacks to finish third, Caudrelier knows he has two strong opponents in Vestas 11th Hour Racing skippered by Charlie Enright which won the opener, and the Spanish team on MAPFRE, skippered by Xabi Fernandez, which finished second.

“Of course we are all keeping an eye on our rivals,” he said. “I always knew that MAPFRE and Vestas would be strong teams and they just showed it. I think they’ve got a good way to sail. What you can see is that they are proactive, they make their own choices, which is good and it’s what we have to remember from Leg 1. We don’t have a complex about them; we can sail fast, we have to do what we want and be a leader.”

Marcel van Triest, the Dongfeng Race Team meteorologist, says the absence of the waypoint at Fernando de Noronha could tempt some navigators to try to cut the corner to Cape Town via a more easterly route than is typical for the Volvo Ocean Race. But that option is full of risk.

“This time around there is an option to go further east,” he said. “But further east means the Doldrums are harder to get through. However, if you do manage to get through them then, once you get out, you have a much nicer angle in the south-easterly trade winds. Any boat to leeward of you (further west) will be in a disadvantageous position relative to yourself.”

Like Caudrelier, Dongfeng Race Team watch captain Daryl Wislang is keen to get into the Atlantic and put the red and white Chinese-sponsored Volvo Ocean 65 through her paces over more than three weeks of continuous racing.

“Up until now we’ve been doing a lot of coastal sailing so we’re looking forward to getting out into the open ocean and seeing what we’ve got,” said the 36-year-old New Zealander who won the last race as part of the crew on Abu Dhabi Ocean Racing.

“Historically this leg has been the first stage of the race when you hit the ocean running so to speak with a 25-day test. Obviously this time we’ve had a couple of warm-ups with the Prologue and the shorter Leg 1, so this is going to be a nice way to get moving and get the race really underway in the ocean.”

Wislang says the challenge of racing full-bore for so many consecutive days is not an issue. “It doesn’t matter if it’s three days, a week or three weeks because you get into a rhythm on board and after a while you don’t know what day it is – it’s just about the next four hours – either on-watch or off,” he said.

Chinese bowman Chen Jinhao, also known as Horace who will sail as part of an unchanged crew from Leg 1, said: “I am very excited for Leg 2. We finished Leg 1 in third place and I think we all believe we can do better. It is very exciting now to get stuck into a longer stage.

“We have done longer legs before so for me this is fine,” he added. “I crossed the Equator in the last race and the only thing I didn’t like about it was how hot it was, so we will just have to race as fast as we can to get past it.”

The build-up to the leg start featured the Mirpuri Foundation In-Port Race off Lisbon today in which Dongfeng finished in 3rd place. The In-Port Race series counts only as a tie-breaker in the main race if two teams are on level points by the finish at The Hague in June.