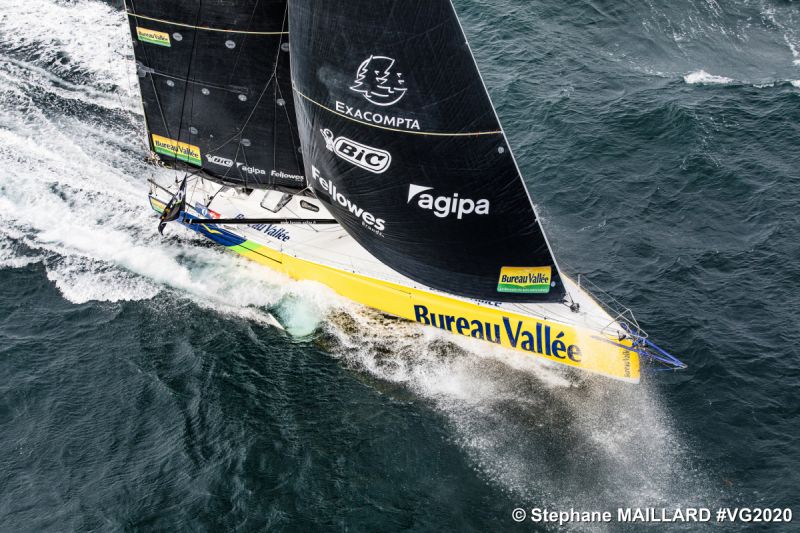 Louis Burton, the popular hard driving 35-year-old French skipper of Bureau Vallee 2, crossed the finish line of the Vendée Globe in second position, emerging from the inky darkness on his yellow hulled IMOCA to break the line at 23.45hrs 12mins on Wednesday 27th January, 04h 09min 25s after Charlie Dalin in what is the proving to be race’s closest and most hotly contested finish ever.

Burton’s elapsed time for the course is 80d 10h 25min 12s. But, like first placed Dalin the skipper from Saint Malo must wait until rival Yannick Bestaven crosses the finish to discover his final position as the skipper of Maître Coq IV has 10 hours and 15 minutes of time allowance for helping in the search and rescue of Kevin Escoffier.

Burton’s success is a triumph over adversity and technical issues as well as a reflection of his ability to drive himself and his IMOCA close to the limits.

Racing the IMOCA 60 which won the last Vendée Globe in a record time of 74 days 3hrs in the hands of Armel Le Cléac’h, Burton has cemented his reputation as a skipper to watch for the future. He pressed hard and fast in South Indian Ocean, often working further south than his rivals for longer and usually reaped a reward.

But his attack took its toll at times and he was forced to repair on two key occasions, once just before the Kerguelens with autopilot and sail problems in the Indian Ocean, and at the remote Macquarie Island half way between New Zealand and the Antarctic.

After climbing the mast three times while drifting in the protective lee of the remote island, Burton returned to race mode with his boat at 100% but in 11th with a deficit of 938 miles on the then leader Bestaven and around 500 miles on the main peloton. By Cape Horn he was sixth and had reduced his deficit to 640 miles to Bestaven and by Salvador de Bahia he was second again, 20 miles from the lead.

Burton improves on his seventh place in the last Vendée Globe with a remarkable performance considering that he runs a lean, efficient operation from his home town of Saint Malo with a small team, eschewing the training ‘poles’ and the circuit races, in favour of training on his own. Like Bestaven, he was not picked by any of the pre-race tipsters as a potential podium finisher.

He has had the passionate backing of French office suppliers Bureau Vallée for ten years. One of their best decisions was securing the 2016-17 winning boat before it had crossed the finish line, to which they have made few upgrades beyond some new sails and electronics.

If he has earned a reputation for his ability to push hard and fast for long periods there is a maverick side. He memorably jumped the start gun – for which he took a 5hr sin bin penalty  – took an additional 1hr for failing to send a sealing image correctly, and strayed for 20 minutes into the Antarctic Exclusion Zone for which there was no penalty because he returned back to his entry point. But that should not mask the fact that he has sailed a smart strategic race.

His technical problems started almost straight way, while still in the Bay of Biscay, with a leak at the keel ram and a cracked forward bulkhead. Louis carried out repairs before contending with Storm Theta, when he dived south close to the worst conditions with his foot on the gas.

In 48 hours, Bureau Vallée 2 went from 14th to sixth place off the coast of Morocco. Despite his problems, Burton highlighted himself as a skipper to follow.

He maintained sixth place at the equator, before routing well south around the St Helena high-pressure system. After passing the Cape of Good Hope in third place, and following the successive retirements of Kevin Escoffier, Sébastien Simon, Sam Davies and Fabrice Amedeo, Louis Burton moved up to second behind Charlie Dalin on 4th December.

“I’ll be trying to get the maximum speed, telling myself that the others probably have their own problems. I’m going for it!,” he said on December 6, despite having suffered autopilot problems for two days. This in turn led to mainsail car problems, preventing the sail being hoisted above the second reef position and forcing Burton to hand steer for long hours.

After his pitstop at Macquarie he subsequently proved unstoppable, gaining five places by Cape Horn, before moving up to third in what became a big restart for the leaders off Brazil. “I have never known this excitement and pleasure racing so close,” he reported. “I count the miles that separate me from Thomas Ruyant and Damien Seguin and examine their courses. It's exceptional.”

He was then was first across the equator – the final big milestone – on January 16, ahead of Charlie Dalin and Boris Herrmann. A big gamble taking a wider course to get north faster during the climb back up the North Atlantic didn’t pay off in a big way, but Burton remained up with the leading group, pushing hard towards the finish.