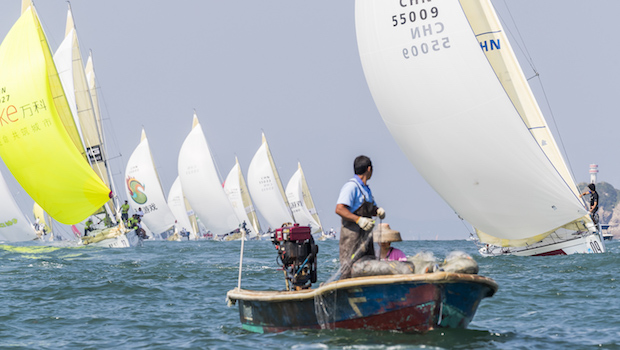 Vanhang Longcheer extended her lead in the Beneteau 40.7 division of the China Cup International Regatta after winning Saturday’s round the island race.

The defending champion, skippered by Australia’s Joseph Dennis O’Keeffe, is proving hard to beat this year, and it will require some exceptional sailing by the other top crews if they're to get past the current leaders.

Second in today’s 15-miler was My Side Team from South Africa. Helmsman Mark Sadler commented: “We started in 10 to 12 knots of breeze, got off to a cracking start and we led to the top mark

“We had a nice sail around the back of the island, but then Vanhang passed us on one of the shifts. We had a good race with them and the Kiwis (Yiihua Pocket Emirates Team New Zealand) all the way to the finish.”

Like his helmsman, Josh Junior, Andy Maloney is another of the ‘cyclors’ – the cycling sailors – who won the America’s Cup for Emirates Team New Zealand earlier this year. This week the Maloney is working the mainsheet. “The coastal race was good fun, around the island anticlockwise. We just made one tactical mistake up the beat on the far side, and that cost us a couple of places and we finished third.”

Maloney still believes his team can prevail. “We're pretty confident going into tomorrow, a couple of other teams out there are going really well with good boat speed, but we'll just go out there tomorrow and try and get off the start line cleanly. If we can do that, I'm confident we can stay out in front and do well.”

The America’s Cup itself, the 166-year-old trophy, sits proudly on display at the China Cup with a guard on either side. The shining silver ewer is a shining reminder of just what the Kiwis achieved in conquering the Cup in the most high-tech sailing contest ever seen. Yet here is Maloney, Junior and the rest of the Emirates Team New Zealand crew, racing on a 40-foot cruiser that barely exceeds 5 knots upwind.

Even so, with such a calibre of sailor on board, one could be forgiven for asking why the Kiwis aren’t dominating.

“We're definitely sailing some boats that are quite different to what we're used to,” smiled Maloney. “We are sailing with a lot of new guys on the boat and then a few of the older and more experienced sailors. It’s a group of about nine of us who have never sailed together before but we should probably be trying to win a few more races out there. I think we'll kick ourselves for not winning that one today.”

Maloney is enjoying his first time at the event. “China Cup is a pretty awesome event, a cool place to sail, quite light wind but everyone is really enthusiastic about the sailing and it's a nice place to be.”

One of the people behind the birth of the China Cup 10 years ago is Frank Pong, who continues to steer his 75-footer Jelik with as much passion as ever. Today Pong grabbed line honours although his race around the island was not without incident.

“We had a little moment with a big liner coming up and he was quite anxious to warn us away. We managed to pass his bow with good clearance and there was no problem in the end. It’s very pretty around the island, and I think the fleet really enjoyed the race today.”

Sailing in China has come a long way in a short time, according to Pong, and it’s only set to grow further.

Jelik finished 5th in IRC A today, with Alpha+ winning the race ahead of Standard Insurance Centennial Sailing Team, whose second place keeps them in the overall lead. In IRC B, TongJi Blue Sharks-Ocean Link Team won the race around the island but after a 22nd place on Friday, there’s still a lot of work to do if they’re to get ahead of Team Langdi in the lead.

In IRC C, it’s business as usual for Shenzhen Seawolf, now with four wins from four races. Born Fearless is proving almost as dominant in the Bavaria 37 fleet, winning four out of five races and finishing second in the other.

Australian Torvar Mirsky is also through to the Semis and will face the winner of Yann Guichard and Taylor Canfield whose Quarter Final is yet to be concluded.

At the other end of the spectrum is the Youth Open Regatta with many kids both from the local area and overseas competing in Optimists and other small dinghies. The China Cup really is for everyone. Tomorrow is the final day of the 2017 edition and the forecast suggests the breeze will be arriving in time for a perfect wrap on China’s biggest regatta.