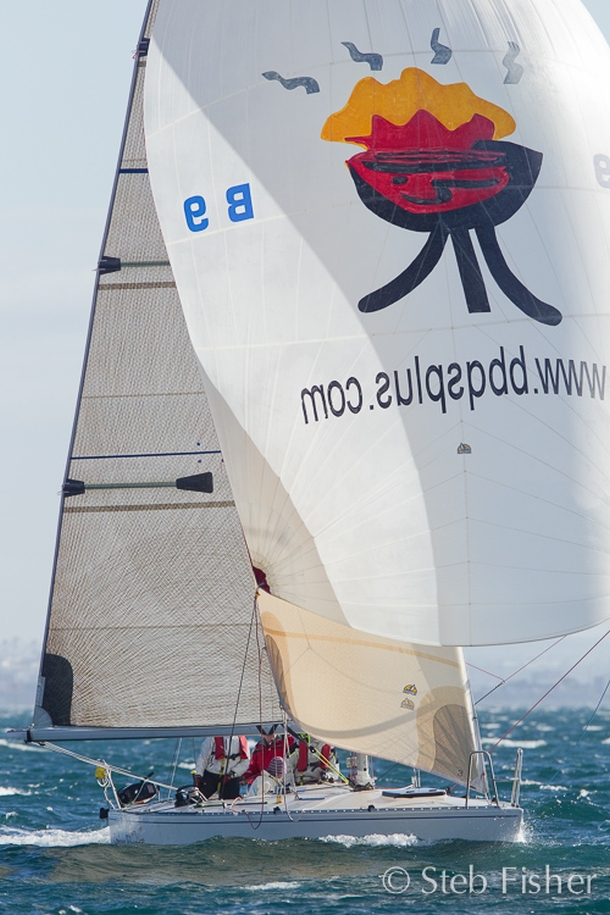 This weekend’s Brighton Ladies Skippers Series (BLiSS), May 23-24, 2015 will bring together women skippers and a mix of sailors from yacht clubs around Port Phillip and Western Port regions, and launch a new Off the Beach (OTB) category for dinghies and small multihulls.

For BLiSS organising committee member Vanessa Twigg it’s been a long wait. A week out from last year’s regatta her Adams 10 called Serious Yahoo racing on Port Phillip with a guest crew aboard was holed and sunk by another Adams 10, also with a guest crew in charge. All seven sailors were retrieved quickly from the bay’s chilly waters but Serious Yahoo sat underwater for 24 hours.

“Serious Yahoo was on a roll leading up to the incident having won the RBYC Associates Cup and recently beaten the multi-Australian Adams 10 champion, Executive Decision,” Twigg recounted. “Then, during the Waitangi Cup, where the event format requires Adams 10 crews to swap boats, Serious Yahoo was hit off the Royal Melbourne Yacht Squadron. The boat was salvaged the next day and relaunched only last weekend for its first winter race.

“It’s taken a year to deal with the insurance and repairs. We had the hull work and mast done professionally and my partner and co-owner James and I looked after the finishes. All our crew came to working bees; it was a bad thing that happened but the upside is our regular crew stuck by us and they are back racing for the BLiSS,” Twigg added.

“We are looking forward to this weekend. We’ll sail conservatively because we are still tuning the boat. The BLiSS is an event well worth supporting; it’s really good for our club and for women, whether they are on the helm or not. Some will helm for the first time, some are always at the helm. There will be people new to crewing and those who have been at it for years.”

Keelboat and OTB racing will commence on the waters of Port Phillip adjacent to the host Royal Brighton Yacht Club on Saturday, May 23, 2015 under Principal Race Officer Paul Pascoe. The format for both fleets is windward/leeward short course racing scheduled to start at 1pm.

Sunday’s passage race around fixed marks for keelboats is both the RBYC Associates Cup and Race 5 of the Port Phillip Women’s Championship Series. The Mayor of Bayside Felicity Frederico will demonstrate her support for the BLiSS regatta when she joins the crew of the glamourous Moody 54, Trybooking.com, for the longer race. Meanwhile closer to shore the OTB divisions are expected to start their deciding day at 11am.

Wendy Wilson is towing her single-handed Sabre dinghy called Heart Beat from Western Port to RBYC to be part of the inaugural OTB division. “I think it’s a great idea,” said the Somers Yacht Club member.

A forecast high pressure system over the area looks set to deliver gentle conditions, nine knots of southerly breeze in the middle of Saturday and merely three knots of northerly breeze early Sunday afternoon, topped off by a pleasant 16-17 degree top temperature for the autumn weekend.

“Hopefully we’ll get some wind on Sunday…. at least we can paddle around if we need to,” said Hobie 14 skipper Georgia Warren-Myers who is bringing 2 Nauti to the BLiSS’ inaugural OTB contest. “I think adding an OTB division is a great initiative and recognises one of the major sailing sectors.”

Warren-Myers talks about the unique challenges of sailing single handed: “it’s different to sailing on a big boat with a big team. You are independent and need a lot of nous in terms of funding your own campaign and boat maintenance.”

There will be cash prizes for the BLiSS AMS placegetters as well as prizes for IRC, PHS and the OTB divisions, with series winners’ etched on the perpetual trophies. The only requirement for the BLiSS is that a female helms.

In two weekends some of the same sailors will don thermals again for the Royal Melbourne Yacht Squadron’s Australian Women’s Keelboat Regatta over the June long weekend, 6th-8th, marking 25 years as the only national all-women keelboat competition.

“Being just two weeks prior to the AWKR, the BLiSS series offers a great opportunity to practice and get crews into full racing trim,” said Tracey Baldwin, chair of the BLiSS organising committee and skipper of Greg Clinnick’s Sydney 38 Audacious this coming weekend. Baldwin will be missing from her regular place on the bow as she seizes the helm of Audacious to defend her current BLiSS crown of the triple hat trick, having won all three divisions AMS, IRC and PHS for the last three events.

BLiSS organisers may accept late entries. For more information head to their website.