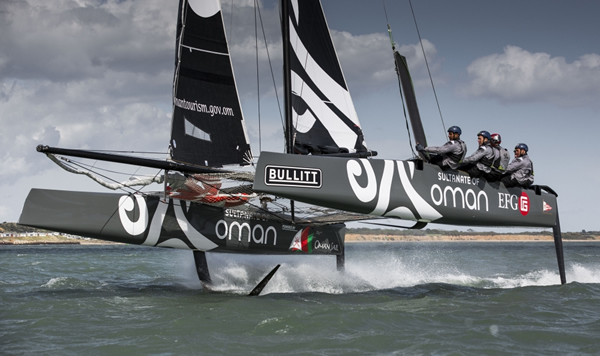 Oman Sail has launched a brand new campaign named the ‘Sultanate of Oman’ for the inaugural Bullitt GC32 Racing Tour, starting next week in Austria.

Leigh McMillan, Oman Sail’s champion skipper with two Extreme Sailing Series titles under his belt, will head up a new GC32 crew featuring The Wave, Muscat teammates Nasser Al Mashari from Oman and Britain’s Peter Greenhalgh – the two other crew members will be announced ahead of the first event.

“This is something new and fits in perfectly with everything Oman Sail is trying to achieve,” said McMillan.“The new series will give us more opportunities to develop our Omani crew mates and extend the reach of Oman tourism into Europe.”

The new campaign, which is backed by Oman’s Ministry of Tourism and co-sponsor EFG Bank Monaco, kicks off in just a week at Lake Traunsee, Austria.

Later in June, the GC32 fleet will race around the Isle of Wight as part of the UK event called the Cowes Cup before they head to Kiel in Germany, Fiumicino in Italy and Marseille in France.

These events will dovetail with Oman Sail’s continued Extreme 40 and MOD70 activities that have already contributed to the Sultanate of Oman’s high profile across premium tourist markets throughout Singapore, Australia, UK, China, Turkey, Russia, Germany, Italy and France.

Oman Sail’s CEO David Graham gave the GC32 campaign his full backing and said he looked forward to having the same level of success in this new multihull class as has previously been enjoyed on the Extreme 40 and the MOD70 circuits.

“Oman Sail has enjoyed considerable success in developing our Omani sailing talent through international competition while also contributing to raising Oman’s profile as a high end tourist destination over the last few years and we are confident the new GC32 campaign will bring the same level of success,” he said. “We are committed to staying at the forefront of the sport and this represents a great opportunity to explore new areas and step up the development of our Omani sailors.”

Her Excellency Maitha Al Mahrouqi, Undersecretary of the Ministry of Tourism of Oman and Chairwoman of Oman Sail, added: “We have seen the benefits of using the sport of sailing, in giving Oman exposure as a high-end tourist destination. The Bullitt GC32 Racing Tour takes that one step further, as it creates great visibility for Oman in some of our strategic markets, such as the UK, France, Germany and Italy.”

“We have enjoyed a fruitful association with Oman Sail through EFG Sailing Arabia – The Tour and are excited to be taking our relationship further,” said George Catsiapis, Managing Director of EFG Bank Monaco. “Our aim is to make EFG the private bank for sailing and we believe this new partnership will help consolidate that position.”

McMillan is excited about his team’s prospects and what the campaign means for the future of Omani sailing.

“Our Omani sailors are ambitious and aspirational and want to be competing at the top level of sport and the GC32 fulfills those ambitions. The future of the sport quite clearly is in foiling and as sailing technology moves on, we need to move with it or there is a danger we will get left behind.

“We have a lot of work to do before the first event in Austria but we are confident we will pick it up quickly and we will push hard and hopefully be competitive. We have a bunch of talented sailors who learn quickly and that will be to our advantage. We can’t wait to get foiling.”

Flavio Marazzi, President of the GC32 Owner’s Association welcomed the team: “It is great news for the Bullitt GC32 family to have the two time Extreme 40 Champion Oman Sail competing with its catamaran legend Leigh McMillan at the helm. Oman Sail has shown in different sailing project how fast they can improve and win major championships. For sure new teams such as this will push the Bullitt GC32 Race Tour to the next level and make it even more interesting for'hesitating' semi-professional teams.”