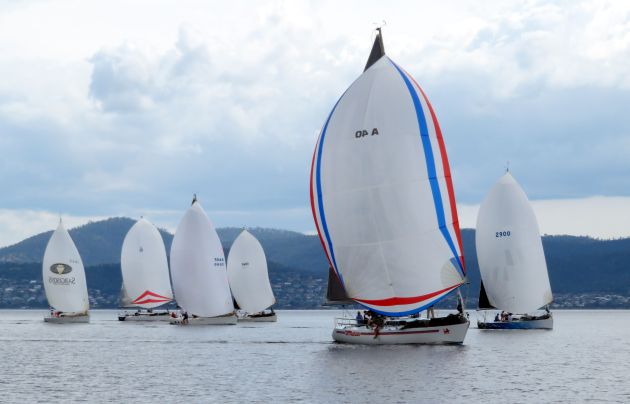 Intrigue leads a group of yachts down the Derwent

Octogenarian yachtsman Don Calvert obviously has lost none of his tactical sailing skills on the River Derwent and Storm Bay with his 33-year-old Castro 40 Intrigue.

Calvert’s sailing career on the River Derwent and southern waters with the Royal Yacht Club of Tasmania extends back more than 60 years, the past 33 seasons sailing Intrigue with continued success.

Calvert showed initiative at the start, in just two knots of breeze, electing to start to leeward of the fleet in clear air.

After two-sail reach down the river, Intrigue was thus among the first boats to pick up the freshening sea-breeze between Blackman’s Bay and the Iron Pot, then enjoying a fast spinnaker run back from Betsey Island in a 15-20 knots sea-breeze

Wayne Banks-Smith’s Farr 40 War Games led the 46-boat fleet home, clear ahead of The Fork in the Road (Gary Smith), Doctor Who and Wild West.

Closest finish of the day was in Group 4 at the end of the 26-nautical mile race to Little Betsey Island and return, with Hornet (Neville Georgeson) beat Ingenue (Nigel Johnston) across the finish line by one second.

In Division 2, the syndicate-owned Twitch had an outright PHS win from 42 South (Mark Ballard) and Jiyuu (Peter Davis). On AMS scoring Jiyuu won on corrected time from Wings Three (Peter Haros0 and 42 South.