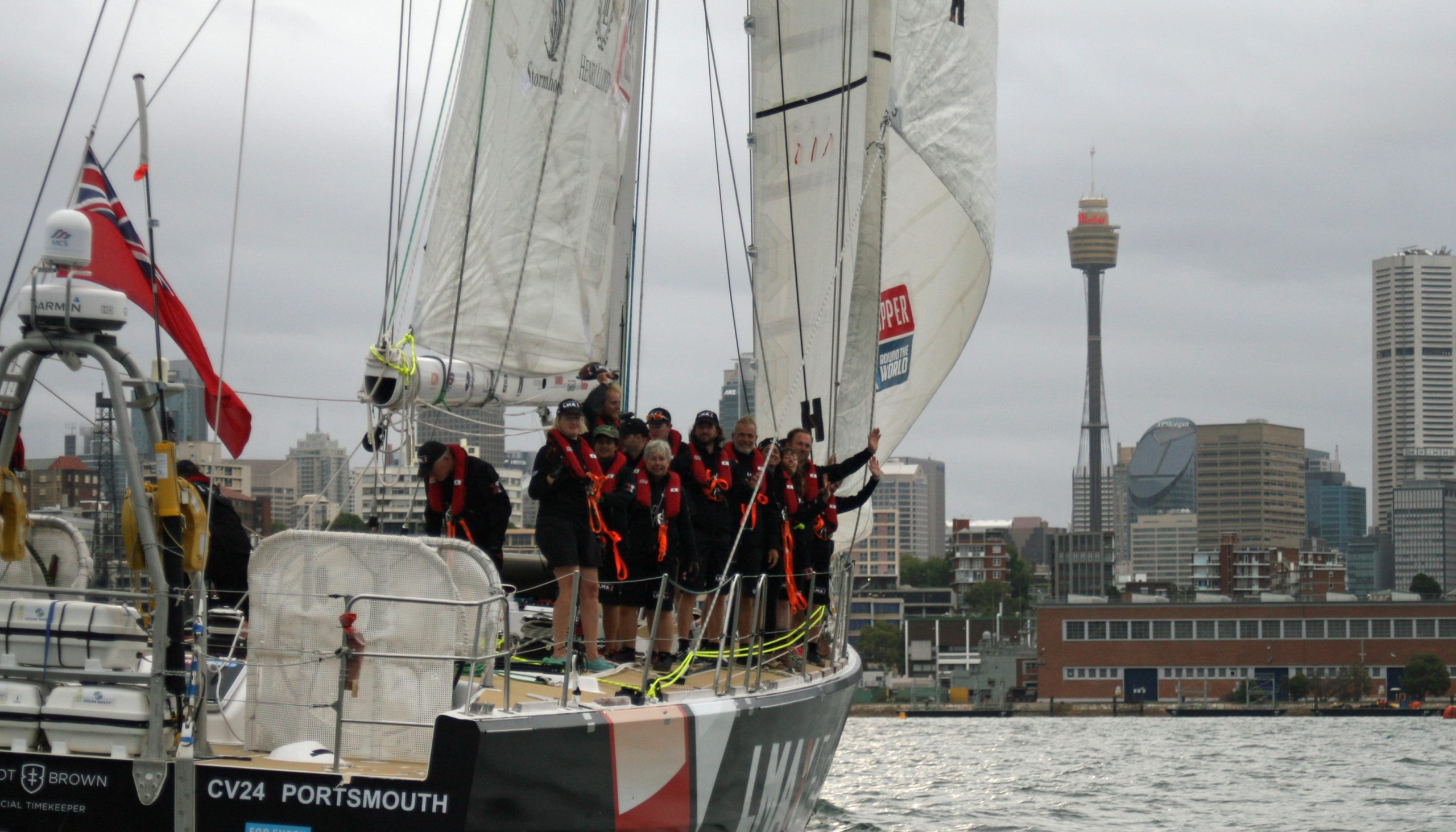 LMAX Exchange has crossed the finish line in Sydney Harbour, taking line honours in Race 4 after racing 2,088 nautical miles from Albany through the Southern Ocean on the Elliot Brown Timekeeper Cup. It crossed the line at 1901 AEDT/0801 UTC.

LMAX Exchange had a 35 nautical mile lead on a chasing pack of three yachts fighting it out for the remaining two podium places, with GREAT Britainedging ahead of Garmin today with six nautical miles currently separating the boats. They are due to arrive into Sydney between 2300 tonight and 0200 Sunday.

“The whole team is really happy to have secured a maximum 17 points to reclaim the top of the overall leader board.

“We knew what we needed to do and were totally focussed throughout. The team are to be congratulated for a great performance. The victory has been hard fought and is well earned.

“This was the best win yet. It was a complete race with everything from a tornado two miles away which was very impressive to big waves, upwind sailing close to the other teams and big surfing downwind doing more than 30 knots. We never let up and the whole race was like the Ocean Sprint for us.

“We are now going to prepare for the Rolex Sydney Hobart Yacht Race. We prepared the boat well in Albany and didn’t have any damage so we will be doing the same again here to be ready,” Olivier added.

LMAX Exchange French crew member Cathy Lorho is from Sydney and has now realised her dream of sailing half way round the world into her home port.

She said: “I am so happy because I was born in Brittany, France, and I always dreamt of sailing across the world like the first people leaving home forever to come to Australia. This was my dream and it has come true. I migrated to Australia 15 years ago and Sydney is home, although I still have a French accent. It was fantastic to sail into Sydney Harbour this evening and see the Harbour Bridge and Opera House and reflect on my journey since leaving London.

“I have all my friends and family here in Sydney and it is very special. I feel quite emotional now.

“I didn’t know that the Southern seas were so tough. We won the race but we had to work very hard for it,” Cathy added.

“I admit to having a tear in my eye watching you live on Periscope arriving in Sydney…From afar that looked like a difficult race and you have been through a lot. We at LMAX feel incredibly lucky to be part of your team. Thank you from the bottom of our hearts.”

Race 4 is called the Elliot Brown Timekeeper Cup after the race's Official Timekeeper. Built to go the distance during the circumnavigation, Elliot Brown watches are being worn by Skippers and crew to test their durability in the extreme conditions.

Garmin has crossed the Race 4 finish line into Sydney in third place, finishing at 0339 local time 13 December, 1639 UTC 12 December to complete the podium.

GREAT Britain Skipper Peter Thornton said: “It was a tough race and I am very pleased with the boat and crew. twelve hours ago I was getting very stressed and was thinking I could not get the boat to go any faster, and a couple of things changed, and it shows that you can never give up. We just pipped Ash and his Garmin crew at the end.

“We had to battle the East Australian Current against us, and that just made the difference against us and Garmin in the end. We pushed the boat hard and at one point coming round the south of Tasmania, we had 60 knot gusts when it was already blowing 40-50 knots. We just had to go with it and were surfing along at 20+ knots. The crew have had their first taste of the Bass Strait, and they have been asking for a briefing about what to expect on the Rolex Sydney Hobart Yacht Race too,” Peter added.

GREAT Britain crew member, former Olympic Sprinter Abi Oyepitan said Race 4 was the toughest thing she had ever done in her life.

“I’m really pleased to be here but I am feeling really tired – it was really hard,” Abi said.

“The Southern Ocean was something else. It was treacherous actually and really, really hard work. It was constant with massive swells, massive winds. We heeled over a lot of the time and it was hard going, a real challenge.

“I think it was the hardest thing I’ve ever done actually, physically and mentally. I think mentally I was going through all my emotions. At some points I wanted to just get off the boat and then I told myself 'no I can do this'. It was a rollercoaster of emotions but I had a great crew. My watch were fantastic – a lot of them are round the worlders and they are really up for it so you can’t help but feed off that enthusiasm, so I think that really helped me as well.

“The sense of achievement is overwhelming. I knew this was going to be challenging but it was more than I ever imagined and was definitely different to anything I’ve ever done or even conceived of every doing ever again!

Garmin Skipper Ashley Skett also reflected on the hard-fought battle between his team and nemesisGREAT Britain.

“I feel pretty shattered,” he said upon arrival.

“The first week was very tough the conditions didn’t really let up with the close-hauled sailing and especially with the battle with GREAT Britain the whole way. They are turning out to be quite a problem for us every leg. It seems to be very close competition with them. Pete and I have a similar take on things and I can predict what he is thinking a lot of the time and that makes for some close, exciting racing.

“It’s good to watch back home, but tiring for us. We damaged our heavyweight spinnaker yesterday unfortunately as we were pushing very hard, and that is where Pete took advantage of that happening.

“We were catching up at the end, but it just wasn’t quite enough time. We have learnt to sail the boat really well now and we are looking forward to continuing our good form in the Rolex Sydney Hobart Yacht Race,” Ashley added.

Garmin crew member Ross Ham, 58 from Brisbane, Australia, is racing round the world again having completed the Clipper 2013-14 Race. He is the first double circumnavigator in the history of the Clipper Race.

He said upon arrival: “I’m feeling very, very happy to be here in Sydney again. My wife Kathy has surprised me by turning up to meet me here so I’m obviously really happy and also it was a great race. It was great to be in the top four boats pretty much all the way and there was some really close racing this morning.

“One day the wind recorder showed over a four hour period that the wind was greater than 50 knots for 20 minutes, peaking at 76 knots and the boat speed averaged 18.1 over an hour which I believe must be close to some sort of Clipper Race record. I was assisted by Mike my watch leader as my second helm and I also had another crew mate Leo standing next to me in case the wind pressure became too great. We were flying, we were actually bouncing over the waves. That’s why I am here doing this race a second time and it has certainly opened my eyes for future times too.

“If there are enough whispers, eventually that becomes talk. Talk may become fact so yes, I am actually considering signing up for a third circumnavigation! The Clipper Race is a huge challenge. I enjoyed the helming on this leg so much, and I’m thankful to my Skipper Ash for giving me the opportunity to do so over the watch. It ticked all the boxes for me,” Ross added.