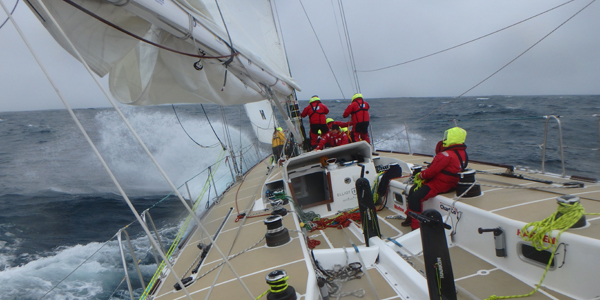 Downwind in the Southern Ocean on LMAX. Photo Clipper Ventures.

The heat is on as the Clipper Race fleet closes in on Sydney and the Elliot Brown Timekeeper Cup lives up to its name with the smallest of margins allowing gains and costing positions. All the teams have rounded the south of Tasmania and are making fast progress up the Bass Strait, with the first four boats expected to arrive in Sydney within the next 36 hours.

There are two teams currently in Stealth Mode: Mission Performance, which has been in an ongoing battle with Garmin and GREAT Britain for a place on the podium, and Da Nang – Viet Nam skippered by Sydney sailor Wendy Tuck who is hoping her familiarity of these waters will help her team close in on the boats ahead, Derry~Londonderry~Doire and IchorCoal.

Skipper Wendy says: “Sydney is getting closer. We are blast reaching along at the moment, so it’s great to be sailing in the right direction.Derry~Londonderry~Doire has been near us on the AIS (Automatic Identification System) all day, so it nice to have someone close to race up the coast.

“The breeze came back in late yesterday afternoon and finally did us a favour. It changed so that as we got around the corner of Tasmania the wind allowed us to alter course and head north rather than sail out to sea and put a tack in. Thank you wind gods.”

Visit Seattle Skipper Huw Fernie sums up the thrill and excitement of racing in the Bass Strait as his team continues to chase down the first four boats: “We are lucky enough to be once again going with a favourable wind and sea state, and Visit Seattle is purring along being pulled by our bright orange Yankee 4 sail. It’s small, strong and reliable, and oh boy, we're flying along now!

“There can be few stretches of water as famous as the Bass Strait; it's here where all the power of the Southern Ocean has been squeezed between Australia and Tasmania giving a knock on effect that changes the wind speed and sea state considerably, a special place in the world.”

LMAX Exchange has a 41 nautical mile lead over its nearest rivals, which if maintained, means that Skipper Olivier Cardin and his crew will become the first team to have a clean sweep in the Clipper 2015-16 Race, taking maximum race points, maximum Scoring Gate points and the Ocean Sprint points.

However it is Garmin and GREAT Britain that have set the pace the last twelve hours, each covering 126 nautical miles. The former has moved into second place, as Garmin Skipper Ash Skett explains: “So as I type, GREAT Britain is just one nautical mile behind us and we are both going full pelt in a bid to grab second place in the Elliot Brown Timekeeper Cup. A glance over to the page which shows GREAT Britain’s AIS details on the Garmin GPS Map 6012 chart plotter lists its current status as a 'Dangerous Target'. You can say that again. This morning we managed to sneak around it as it came out of Stealth Mode and into what may have been a wind hole. Since then it has closed the distance on us and sets up an absorbing finale to what has so far been a thrilling race.

“Just 24 hours ago there was also great excitement as we battled with Mission Performance for the final point available at the Scoring Gate. For a short while it looked as though it may be a photo finish but in the end we were able to power through and clinch it by a few minutes.”

So after a tense wait there are the results of the Scoring Gate: Three points to LMAX Exchange, two for GREAT Britain and one for Garmin, with Mission Performance narrowly missing out.