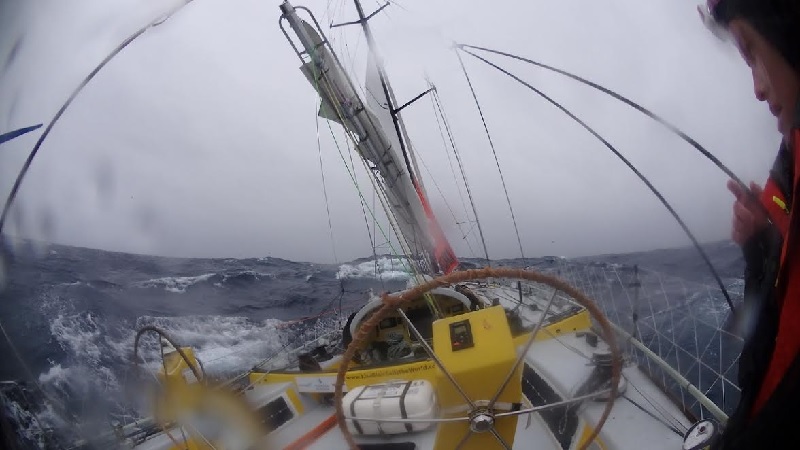 Lisa Blair is in the final stages of her Antarctic cirumnavigation but the loss of her rig and subsequent repairs in Cape Town mean she is taking on the Southern Ocean in winter. After two days of calm conditions, the ocean has returned to its usual nasty self.

Well last night ended up being a bit of a wild ride and it looks like I am in for more to come.  After I finished the blog last night I started to get ready for bed.  The winds were blowing from the North East at mostly 25 knots but occasionally they would get up to 30 knots.  I was sailing with the third reef in the main sail and the storm jib up.  I had just finished filling up my hot water bottle and was about to dive into bed when the winds started to peak through a little front.  All of a sudden, the winds went from 25 knots to just above 30 knots.  I started watching it and was in two minds about whether I should put the fourth reef in now or wait a few more hours until midnight.

At midnight, the barometer was going to start to rise again and the winds were going to back to the South West so I would be needing to get on deck to gybe the boat anyway and the winds would likely blow stronger when the barometer starts to rise.  The boat was still under control in the 30-33 knots of wind that I had at the time but I knew that I would also be making good speeds with the fourth reef in with that much wind around.

A few minutes later the winds dropped off back to 25 knots and I decided that bed was going to be the option and I would get up at midnight for the wind shift, put the reef in and then gybe the boat.  I had no sooner laid in bed when the boat rounded up to windward setting off all the auto pilot off course alarms.  I looked at the wind and I was in the middle of a large gust of wind blowing 37 knots…  Fine.  I got out of bed and started to get ready to go on deck and put in the fourth reef.  I figured this was the world's way of saying don’t be a slacker…  All dressed I chucked the reef in whilst copping buckets full of salt water in the face.  Job done I went below and towelled off.  It ended up being the right choice and you would think that by now I would be very well adapted to living by the rule 'if you’re thinking of reefing, reef!' but sometimes I do try to combine my on-deck efforts to minimise my exposure and also because getting all the gear on for 5 minutes can be such an effort.

Dryish and back in bed, I checked the winds and they were now consistently above 30 knots.  Climate Action Now was still making great time in the following swells, as I surfed waves at regular 16 knots and I even managed a couple of 20 knot surfs.  The first 20 knot surf had me bracing myself for disaster with one hand pressed against the wall of my bunk and the other gripping on to the bunk above.  I could feel the boat take off and start to surf and when she is going that fast anything can happen.  As we surfed I initially thought it was going to be like all the others, 16 knots and no issues but I could feel Climate Action Now just continue to pick up speed as she flew down the face of that wave.  I could also feel the bow of the boat digging deeper into the water and was just waiting for it to plough into the wave in front and flip the boat over….

Didn’t happen thankfully, as the B and G auto Pilot did a great job but the swell was really messy with these steep waves coming out of nowhere so pitch poling (burying the bow and flipping the stern of the yacht over the top) at 20 knots was not out of the realms of possibility.  It also put me a little on edge and I was surprised that the conditions were as bad as they were, but it was more likely the fact that I haven’t been in a steep seaway for a while, so I had forgotten what it was like.

In the end I managed a few short hours sleep and then had to get up to gybe the boat. Gybing in 35 knots plus is no easy task. As I am sailing downwind the boat will roll a lot from side to side as the waves pass underneath.  I was finding it just as hard to keep my feet as it was to put the gybe in.  Being extra careful I took my time and made sure the main was completely canted before altering the course. Aside from getting completely soaked again, it all went off without a hitch.

The winds were now peaking at 37 knots, steady at 35 knots from the South West and the barometer was rising again.  It wasn’t to last for long, as by lunch time the barometer was falling again with the next system.

I received Bob's (METBob) weather forecast in the morning and took stock of the next challenge ahead.  Tonight, there was to be a blow reaching potential 45 knots in the gusts but steady at 33 knots and then tomorrow night there was an even stronger system hitting with 40 knots steady and up to 62 knots in the gusts.  There is a slight lull in between, starting at midnight tonight, where the winds will drop off to 25-30 knots for a time before building again in the mid-morning monday.

So, I spent most of the day in debate with myself, trying to make a decision on if I should heave-to or stream the drogue… The swell is expected to peak monday night to 8 meters standard and occasionally 11-meter waves. I am back to sailing up and down three storey buildings…  The dilemma is that I am still trying to beat Fedor’s record with my benchmark time, so that would mean that I need to average 160 nm a day from now until the finish to achieve this.  It is not an official time but it would be nice to know that I could.

Heaving-to for a day and a half puts a rather large dint in that and then if I stream the drogue I would still be making ground to the east but I would lose half a day trying to winch the thing back in afterwards. Plus, there is a slight risk that the winds when they go to the WSW might blow me over the 45 South line.  It is a series drogue that I have onboard so it has over a hundred little parachute cones that run along the line.  This is great when needing a drogue to work but makes retrieving them difficult.  The other factor is that if I heave-to and get hit by one of the super dooper large waves then I might have some trouble, so the conundrum is… what to do…

I had hoped that I would be able to keep sailing tonight and then heave-to or stream the drogue in the morning for the peak of the storm but the weather gods had a different idea.  At 2pm today the winds built to 35 knots steady and gusting 42 knots so I ended up heaving-to for the time being to ride out the first stage of the storm.  Climate Action Now is sitting well with winds from the west and I am drifting on a course of 110 True.

There is a chance that I might sail for a bit in the lull from midnight to 10am that is forecast but that will be dependent on how large the swell is at this time and how keen I feel on going back out into the storm in the middle of the night.  I then plan on getting an updated forecast in the morning and deciding whilst in the lull weather I will heave-to for the remainder of the storm or get that drogue out. But it does make for an interesting day tomorrow

Mum – For those following the tracker you will see that Lisa did heave to and then did make the effort to get sailing again in the gap and is currently travelling at an 8 knot average.  Tonight's storm is going to be quite a deal, so she will most probably put out the drogue, however there appears to be quite a lull immediately afterwards, which is fortunate and will give her a good opportunity to pull it in again. For me it will be a repeat of last night, checking the tracker every few hours and going into a mini panic if it does not load quickly.  I will be very pleased to see tomorrow arrive without any major issues.