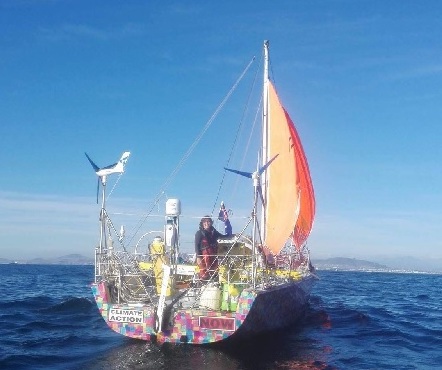 Lisa Blair on route to Cape Town with the help of her jury rig, following the dismasting of Climate Action Now. Pic - Lisa Blair 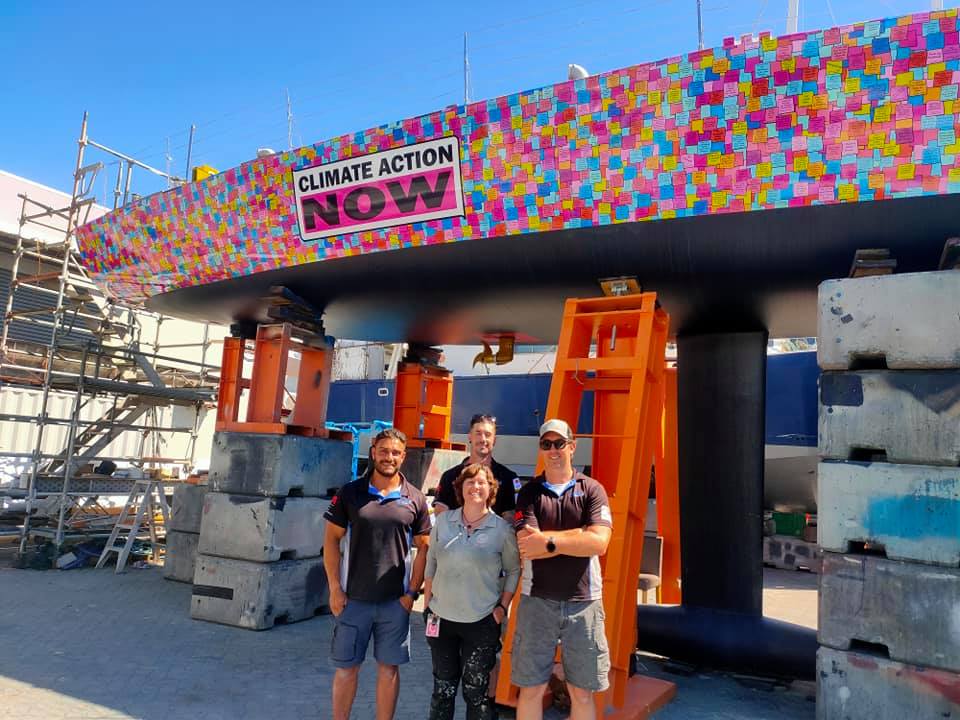 Blair and the Wrap It Marine team in front of the newly wrapped Climate Action Now. Pic - Lisa Blair 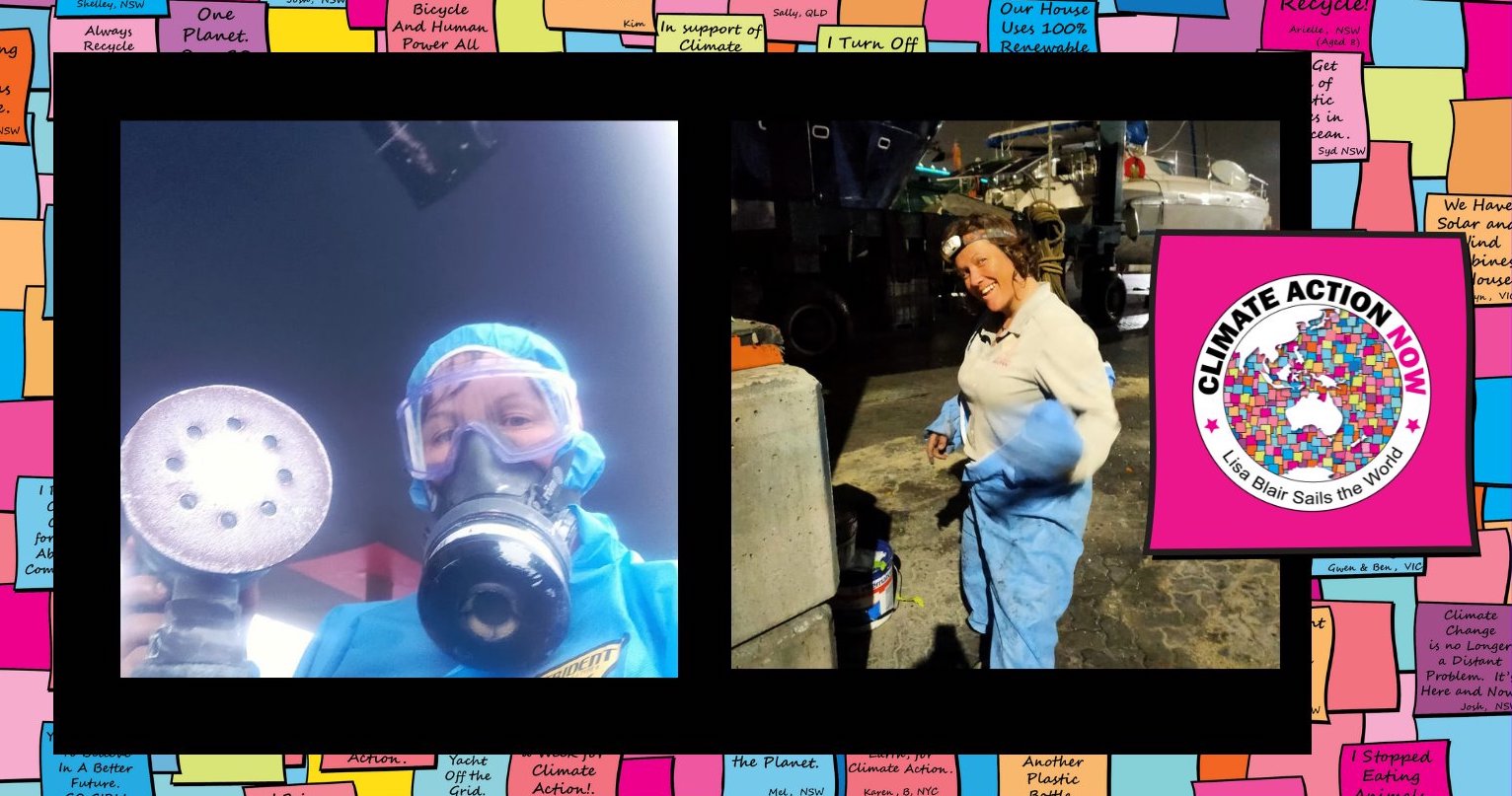 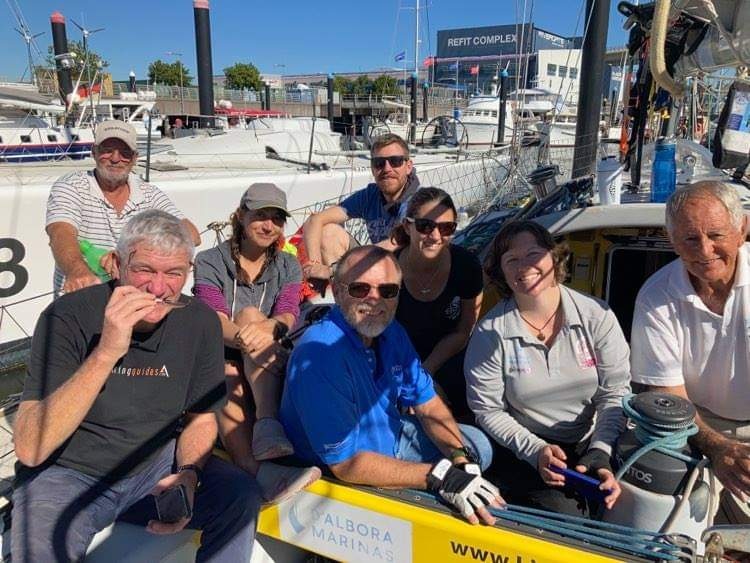 Lisa Blair (second to the right) and a team of volunteers. Pic - Lisa Blair 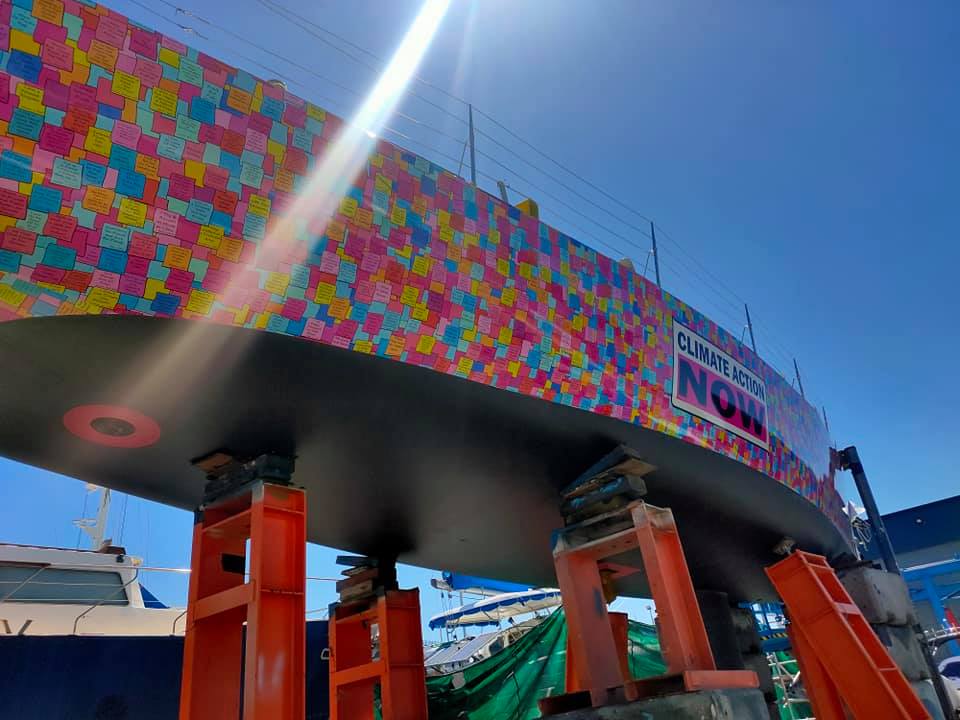 By sharing the lessons learned from this terrifying experience, Blair aims to educate fellow sailors on important boating practices.

Lisa Blair has graciously offered to share her in-depth knowledge on a range of topics with MySailing readers in the lead-up to her attempt to circumnavigate Antarctica.

In December, Blair’s goal is to break Russian adventurer Fedor Konyukhov’s record of 102 days. A requirement of the record is to sail below the 45 degree latitude line. On the voyage, Blair will collect data to help scientists better understand the Southern Ocean and the impact of climate change.

Blair, 37, first attempted to break Konyukhov’s record in 2017. Sadly, her efforts were thwarted when, on day 72, her boat, a 50-footer Hick design, was dismasted during a storm in the pitch-black darkness of night. That traumatic experience would make most salty old dogs shake in their galoshes. But not Blair – she used her extensive sailing experience boosted by a dash of common sense to survive a near-death experience.

After safely arriving in Cape Town, South Africa, Blair got the boat up and running again to complete what she started — making her the first female to circumnavigate Antarctica with one stop.

In December, Blair will set out from Albany, WA, for a second swipe at the record. But she is currently working on her boat nearer to home in Queensland at Brisbane’s Rivergate Marina.

While it’s fair to say most boat owners won’t ever sail a yacht solo in the Southern Ocean, Blair says that, apart from time and money, her rigging preparation procedures aren’t that different to those of regular boat owners.

“I’m still learning a lot as I go through this process,” Blair says. “And if I’m still learning, and I’ve been racing and setting records for 10 years now, then other people in the cruising and ocean racing industry would also still be learning.”

On April 4, 2017, Climate Action Now was dismasted. Prior to the voyage, Blair had been prepped on what action to take if a dismasting were to occur. She had taken every precaution to ensure that her boat could handle big seas and big storms. But the way that events unfurled on the night of the dismasting surprised and shocked the solo sailor.

“In most people’s minds a boat dismasting – if it happens, it’s bad luck. The thing I like to highlight is that my boat had all brand-new rigging wire, it was literally four-months-old when it snapped,” Blair says.

Blair says the conditions at sea did not cause the dismasting. A 6-8 metre swell and winds of 35-40 knots signalled a “fairly average day in the Southern Ocean”. However, the conditions “accelerated the aftermath of the dismasting into a dangerous situation” due to the sheer size and strength of the waves.

According to Blair, the most common dismastings take place when the top part of the mast snaps following “one of the side stays failing half-way up the mast.” However, Blair’s aluminium mast came down at deck level.

The rigging wire from the chainplate to under the first spreader snapped, leaving the mast entirely unsupported.

Blair explains what happened after the rigging wire snapped: “In about 30 seconds my mast came crashing down … when it fell in the water it became an anchor so immediately the boat started turning around. And instead of the sails and rigging being on the low side of the boat, sheltered from the wind and the waves, suddenly the windward side of the boat was getting impacted by the wind and the waves.”

To prevent the mast from puncturing a hole into the boat and causing it to sink, Blair had to disconnect the stays that were holding the mast.

After several attempts using different tools, Blair decided the best method was to remove the pin connecting the mast’s stay to the boat by tapping it out using a screw driver and a hammer. After an arduous three-hours, in hypothermic chill and force 8-9 wind conditions, Blair managed to retrieve the pin. She then tied the mast off the back of the boat (it later snapped off).

Blair’s traits of physical and mental endurance kicked in and she managed to get the boat to Cape Town, South Africa, under motor with the assistance of a jury rig (a makeshift rig she assembled using her boom as a replacement mast). In Cape Town, a rigger inspected the rig and concluded that the stay had failed due to electrolysis. Further testing done after Blair arrived back in Australia confirmed the fact.

The results reaffirmed that the electrical conduit running up her mast was conducting electricity. This is because it was aluminium rather than PVC. It is thought that the conduit must have chafed on something sharp, and as a result – charged up the mast with a 12 volt live current.

“It meant that a bit of salt water with the electrical current running though it at low voltage started corroding the stainless steel. And it aged it about 10 years in that four-month period, to the point of failure.”

Action to take after a boat dismasts:

1. Apply the five-second rule. In an emergency situation such as a dismasting or the spinnaker dragging behind the boat, Blair recommends a quick assessment of the situation. In high-pressured situations we often make rash decisions without considering the safety of ourselves and others, she says. It’s important to take five seconds to ask questions such as ‘Do I need a life jacket?’ or ‘Am I tethered on properly?’

In Blair’s case, she put the rule into practice and disconnected the rigging wire rather than cut it to avoid injury. “The five-second rule is a great rule of thumb that I apply to all of my sailing,” she says.

2. Understand the difference between a Pan-Pan and Mayday call. Blair made a Pan-Pan call because there “wasn’t an immediate risk of loss of life or vessel.” And you can always upgrade Pan-Pan to a Mayday call, if necessary.

Tools to have onboard in case of an emergency:

1. Blair found that a screwdriver and hammer were the best tools for tapping out the pin connecting the stay to the mast.

2. After the dismasting, Blair used a battery-operated angle grinder with a cutting blade permanently installed to grind the bottom of the boom flat in order to assemble a jury rig. For coastal sailors, a splash-proof angle grinder is suitable. For her upcoming trip, Blair bought a fully-submersible angle grinder used by clearence divers, which she will keep fully charged in her grab-bag kit.

3. Blair carries wire and bolt cutters in her kit. And this time around she plans to invest in hydraulic wire cutters. These are easier to use in windy and wavy conditions.

4. And just in case, Blair also has a mini-dismasting kit in a hot-pink pencil case. It is comprised of a: hammer, pair of needle-nose pliers, pair of multi grips and flat-head screwdriver.

Rigging preparation for the record attempt

At Rivergate Marina, Brisbane, Blair has partnered with David Lambourne Yacht Rigging & Consultancy and David Sheedy from the Arcus Wire Group to prepare her boat for the voyage that starts in December. After the traumatic experience of a dismasting, Blair wants to be sure her gear won’t let her down again.

“We’ve not only upgraded the gear from a redundancy, strength, wire side of things – we’ve upgraded it from a mental health side as well, and building my trust back into the boat for a record like this,” Blair says.

Improvements made to the rigging for the next voyage, include:

1. New aluminium mast for Climate Action Now, which is suited to the conditions Blair will face in the Southern Ocean.

2. Spreaders: Blair and her team chose a double-spreader mast. By having the first spreader higher from the ground than it would be for a triple-spreader mast, the load on the lower piece of rigging wire is reduced, ultimately increasing the strength of the rigging wire by 30 per cent.

3. Upgraded items include: next size up in furlers, two jib car tracks so a stay sail and a jib can be run at the same time to increase performance and upsized pins and attachments.

Preparation is key for peace of mind

Although Blair and her team have spent a lot of time on the rigging, that’s not all they’ve been up to.

“I can do all this preparation for the rigging and then hit an iceberg,” Blair says. “You can’t just focus on one element of the boat and have this level of preparation. You’ve got to do it across the board and do it in all capacities and with all systems on the boat.”

Blair’s key message for all boat owners is that preparation is key.

Blair’s top tips for looking after your boat:

All of the hard yards that Blair and her team have put in for the upcoming attempt has helped restore her faith in the boat and her ability to claim a new record. She has already clocked up 30,000 nautical miles since she started sailing Climate Action Now in 2016.

“My dismasting in that last section of the Southern Ocean in winter really changed my relationship with the sea — I didn’t have the trust in my boat anymore because I’d done all the right things and it still broke.

“Whereas this time, with this level of preparation I’ve gained a lot of confidence in my own ability to meet these challenges and to overcome them.”

To find out more on Lisa Blair, see: https://lisablairsailstheworld.com/