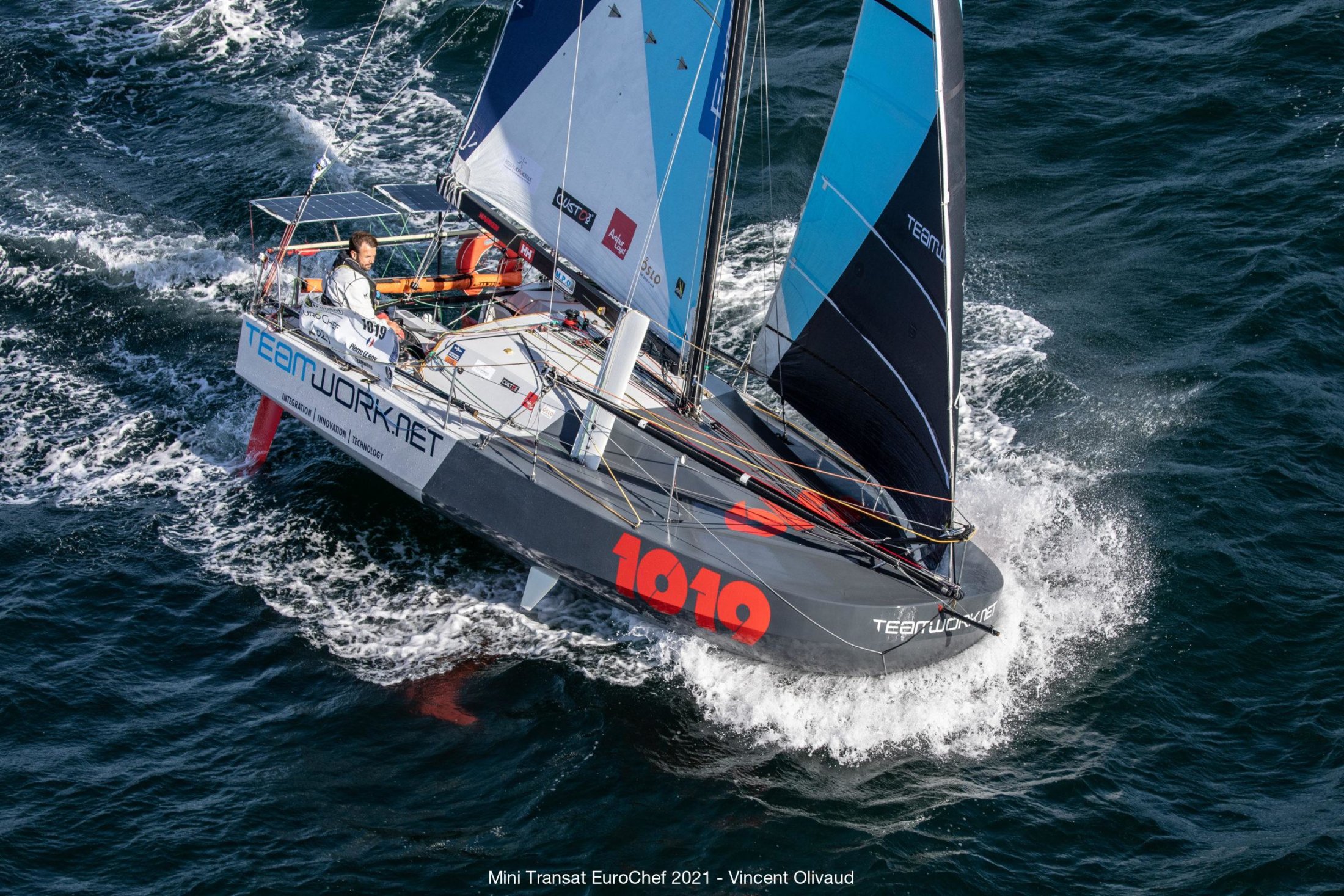 That is a colossal figure, which is also reflected in the gaps between the competitors. To the north, Antoine Bos (825 – Rhino) is sticking to his guns on a shorter, more direct route, around a hundred miles south of the great circle route.

Whilst at the opposite end of the race course, the vast majority of solo sailors, headed by Pierre Le Roy (1019 – TeamWork), are continuing to invest in the south and are currently making headway at the latitude of Guinea-Bissau. The challenge right now: to make a few extra umpteenths of a knot, which could make all the difference further down the racetrack.

But how low will they go? Such is the question on everyone’s lips. But if we’re to believe the latest routing, the answer may well lay as far as 11 degrees north, a point which Pierre Le Roy should reach before too long. For now, the skipper from Lille, who has been heading the fleet since around 08:00 UTC Saturday morning, is still banking heavily on the south. His reason for going south is to make the most of having more pressure.

“With just one or two more knots than his rivals further north, he stands to gain 12 to 15 miles on them per 24-hour stint. That might not seem like a lot, but over 7 days out on the racetrack, there could well be a heavy toll to pay at the finish,” said Christian Dumard, the race’s weather consultant, whose grib files confirm that there is indeed more breeze further south.

So yes, the skipper of TeamWork is having to sail a course which is nearly 450 miles longer than that of the great circle route, but in reality, what you need to focus on is the additional ground he’s covering in relation to his direct rivals. In this instance, it’s only 30 to 40 extra miles and such a deficit can be quickly made up, even with a small speed differential, especially if we take into consideration that there’s still 1,300 miles to go before the fleet makes landfall in Guadeloupe.

Trouble ahead for the leaders?
Some of the skippers appear to have been crunching the numbers.Fabio Muzzolini (945 – Tartine sans Beurre) and Irina Gracheva (800 – Path) are mirroring each other’s strategy.

The same is true among the production boats for Basile Bourgnon (975 – Edenred), Giammarco Sardi (992 – Antistene) and a little posse led by Loïc Blin (871 – Technique Voile – Les Entrepreneurs du Golfe) and including Anne-Claire Le Berre (1005 – Rendez-Vous Equilibre), Giovanni Mengucci (1000 – Alpha Lyre), Pierre Blanchot (890 – Institut Bergnonié) and Romain Le Gall (987 – Les Optiministes – Tribord), with a  certain Hugo Dhallenne (979 – YC Saint Lunaire) clearly keen to be part of the mix after making a dazzling comeback from a rather lacklustre start to the race.

Though the latter is currently in 25th position, the sailor is likely to be one of the sailors to watch over the coming days. It was no great surprise though, he has plenty of pluck and is capable of maintaining some extremely high speeds.

Another competitor worth monitoring closely is Tanguy Bouroullec (979 – Tollec PM/Pogo). The current leader in the overall prototype ranking, his performance is by far the steadiest on his southerly option out of the small group of four escapees in the first leg.

For now, he’s managing to post similar speeds, but it remains to be seen whether this will last. Will his 100 miles of lateral separation be beneficial or not? Place your bets ladies and gentlemen.