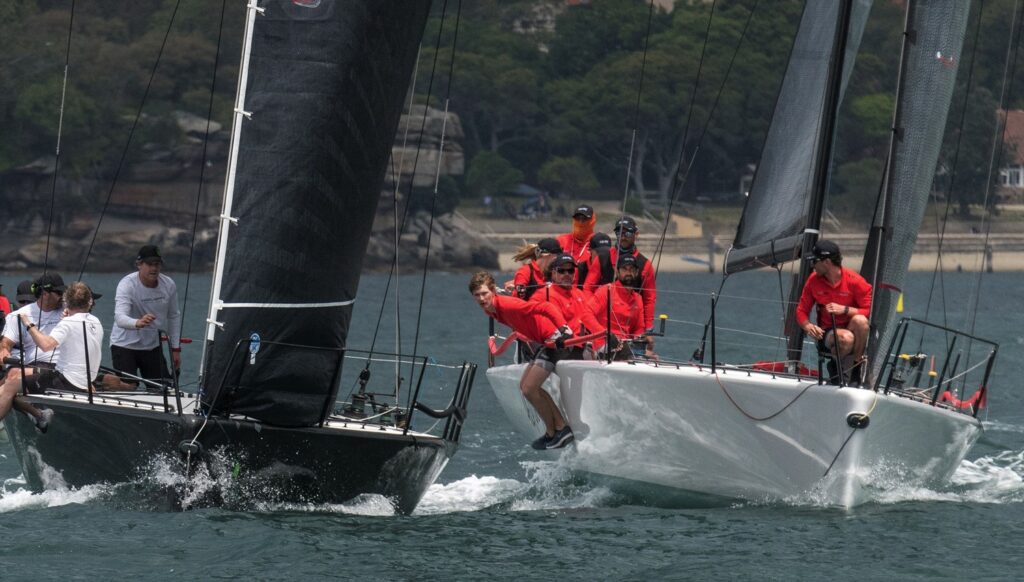 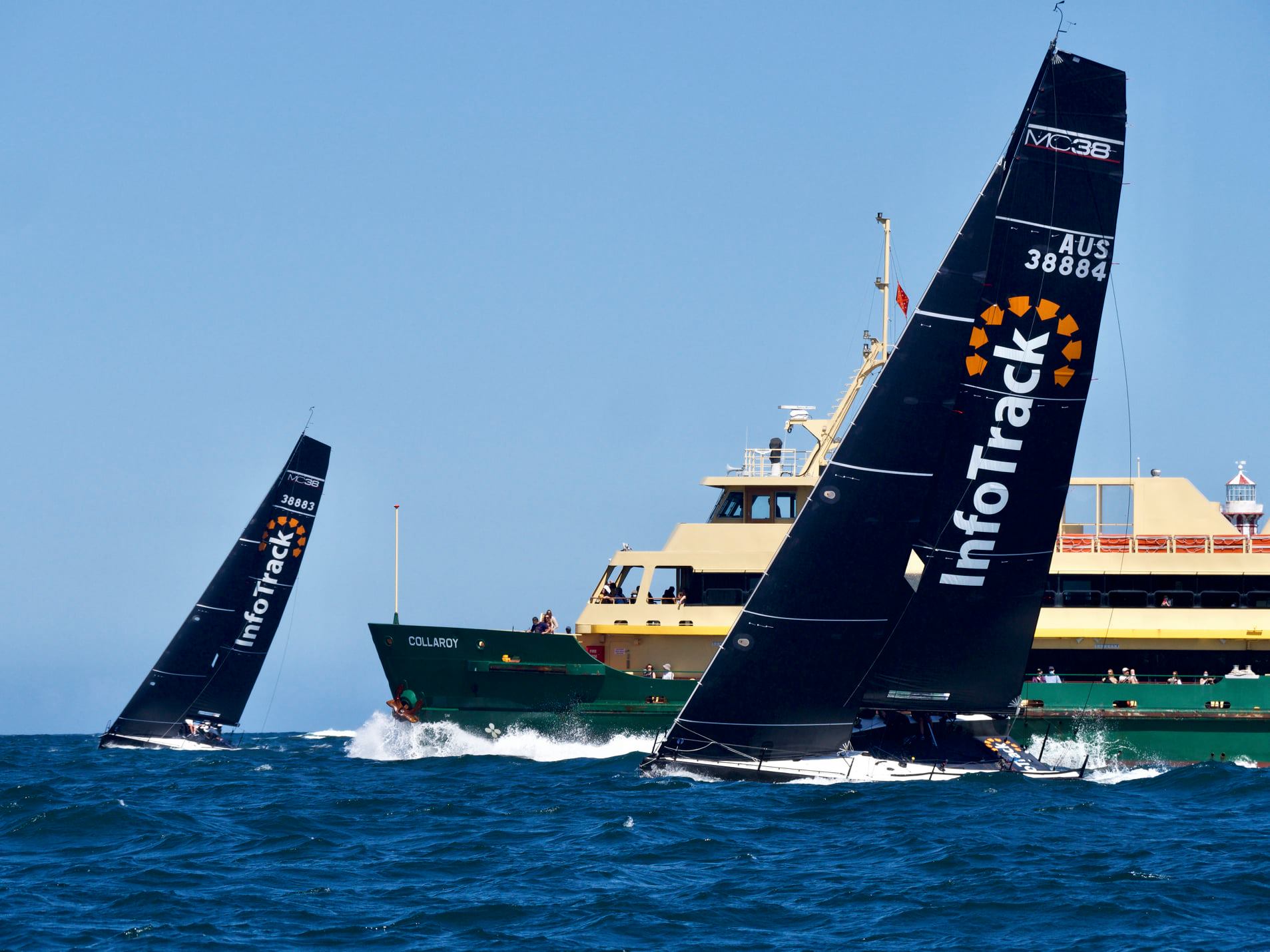 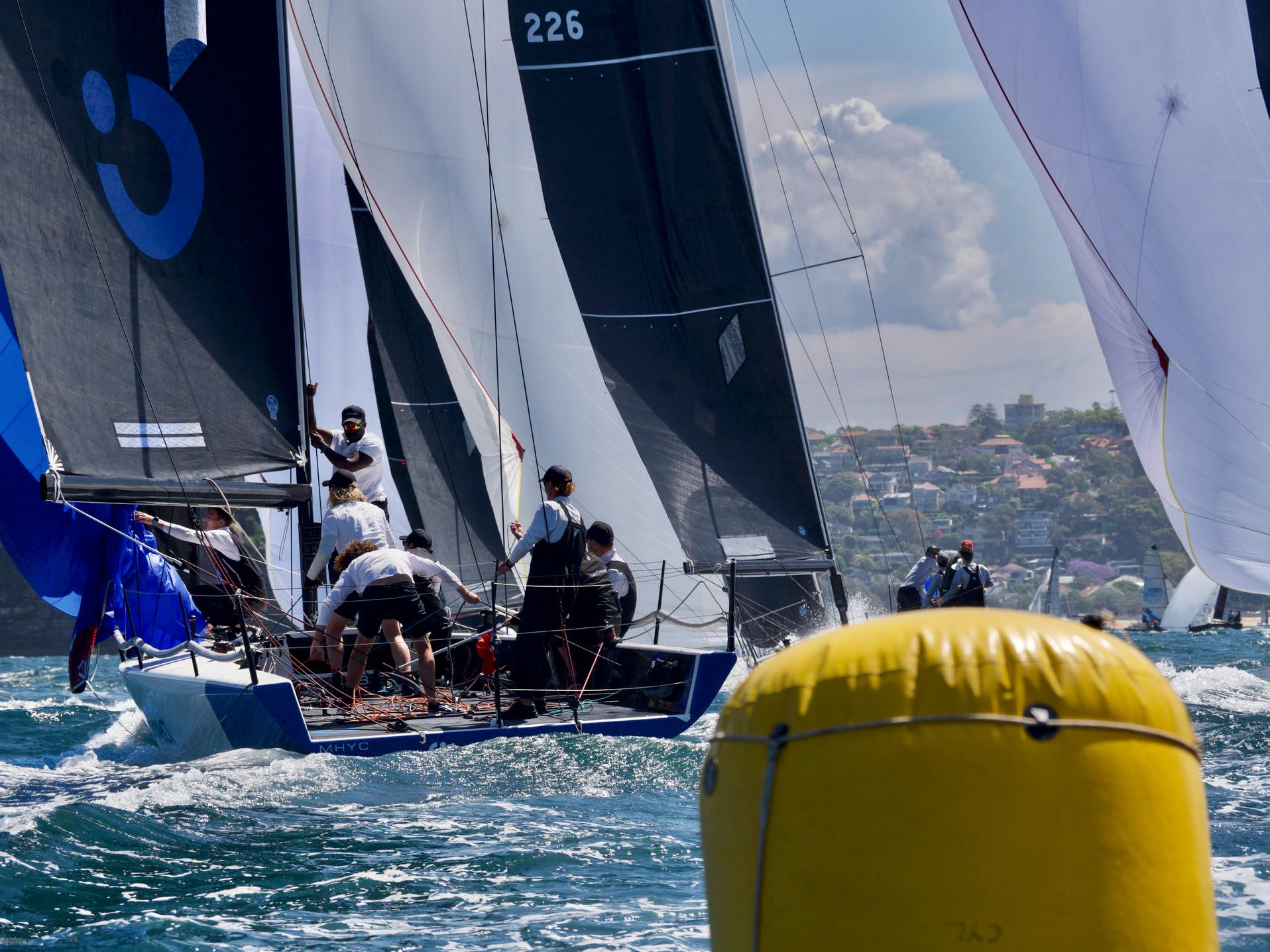 Middle Harbour Yacht Club tried to get a race away on Sunday November 7 under heavy cloud that quashed the breeze and storms that pulled what little wind there was wildly around the dial. Race officer Steve Tucker finally managed a start after 1pm (the first race was scheduled to start at 11am), only to have the light northerly swing to the south which saw half the fleet sailing from the top mark with kites and the other half sailing to the top mark also with kites.

That race was abandoned and the 1400hrs time limit gave Hooligan no chance to reverse the top order.

Recapping the three-day series, Lazy Dog’s Quentin Stewart said: “We felt the boat was quick all weekend. Friday there wasn’t much breeze and it was shifty, and a lot of chop – a tough day’s sailing. Saturday was a glamour with 15 knots out of the nor’east, 16-18 knots for the last race of the day (watch the video), and today was a glass-out.

“I’d like to congratulate the Hooligan guys on a hard-fought weekend – they certainly made it more difficult for us than we would have liked. We haven’t raced for a while and all had moments when we didn’t execute well. Even so, the quality of the fleet is very good and that makes it a pleasure for everyone to sail.”

Olympic and America’s Cup sailor Iain Jensen, who was on mainsheet for Hooligan, said: “It’s always hard to lose by a close margin. Lazy Dog was the stronger team this weekend.” It’s been a few years since Jensen raced with the MC38s and he enjoyed the depth of talent and tight racing this series, adding, “The feeling in the class is really good”.

Sydney’s extended COVID lockdown over the winter months generated significant turnover in the one design class and a new-look MC38 fleet fronted the nationals, the first hit-out since June.

Matt Hanning finished fifth in his first MC38 regatta aboard Thor, his young team making up for limited time on the water with their pedigree – Australian Sailing Squad 49er sailors Jim Colley (tactics), Shaun Connor and Max Paul plus well-known match racer and SailGP’s James Wierzbowski among Thor’s crew. “It was a COVID purchase inspired by Mitch White who helped me put a team together. This regatta was a lot of fun – it’s a really social class,” Hanning said after racing.

Norse mythology inspired him to name his Beneteau First 53 Odin and now he’s added Thor to the stable.

The 2021 Australian Championship marks the end of a shortened season pointscore that went to the Royal Prince Alfred Yacht Club-based Hooligan.

For the full results, see: https://app.sailsys.com.au/club/121/results/series/1377/pointscore?handicap=s