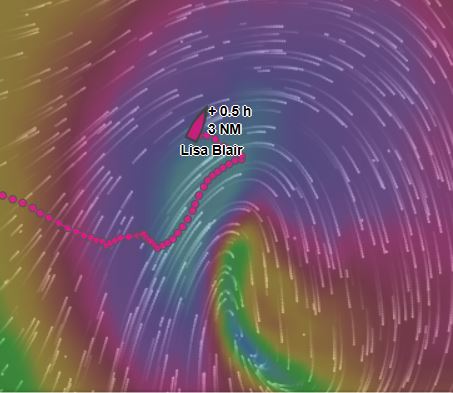 Yesterday we checked Lisa Blair's tracker to see how her attempted circumnavigation of Antarctica was faring. We were surprised and alarmed to see her sailing 355deg – almost due north. Below she explains why, but first her thoughts on sleep deprivation when solo sailing:

Through the night I had winds of 25-30 knots from the North.  From Bob's forecast I knew that the strongest winds would hit at around 6am when the winds veered to the North.  At 2300 the winds were already coming from the North and increasing in strength from 15 knots to 20 knots. I made the call to put the third reef back in in the dark, just in case this Northly shift was also bringing me those extra winds.  Through the night, I maintained the 25 knots of wind as the average with gusts of 33 knots.  The boat was sailing well through the night and making pretty good speeds of 8-10 knots. I was sailing a course of 080 True so I was close reaching on the sail angle.

Come sunrise not much had changed.  It wasn’t until late afternoon today that I noticed the winds beginning to average 20 knots and only gust up to 25knots.  I find that I can maintain some good speeds with three reefs in the main and 20 knots of wind provided the winds are behind me, pushing me along.  Given that I was sailing close to the wind, up wind, as soon as the winds dropped off so did my speed.

I didn’t think there were any hidden surprise waiting for me in the win so  I have just come back from shaking out reef 3.  The boat has just taken off jumping from 5 knots of boat speed to 8.5 knots almost right away and she is now happily sailing along.

Today is also the first time that I have felt fatigued during this trip.  I think all those half nights’ sleeps are finally catching up to me.  I woke up this morning with a mild headache that has continued to build through the day. I often get these at sea and for me are directly related to how much sleep I have had.  No sleep = big headache.

So understanding that a good sleep almost always makes them go away I spent most of today I laying in my bunk…….. wishing that my throbbing head would disappear.  I did manage a little more sleep but it has had zero effect on my pounding head. Finally, at around 5pm my local time I took some paracetamol and tried for that last little bit of sleep.  It hasn’t worked.  I know from experience that only a good night’s sleep with fix it…  Ahhhhhhh

I have also noticed that I feel a bit weaker than normal.  When I shook that reef out, it wasn’t until I coped a nice big wave of icy cold water in the face that I felt awake and present.  I also needed that little bit of extra energy to get the sail up, more than normal.

Well what a contrast in conditions.  Yesterday saw me sailing in light winds and heavy fog and today has seen me sailing in 40 knots of wind and sheeting rain…

This morning I woke to 15 knots of wind from the North East and the boat was trucking along nicely.  I was very lucky in the conditions that night and got probably the best sleep of the trip. I awoke feeling very rested.  By the time that I got up, sent off my position reports and read the recent forecast from Bob at METBob it was almost midday so my breakfast turned into lunch.

In Bob’s email he advised me to get prepared for another blow. I could expect a trough this afternoon before a low-pressure system came through.  So, I decided to do all my checks and ensure everything was tucked away in its home or lashed down for some rough conditions.

By the time 3pm came around the winds had started to build and I was starting to get gusts in the 30 knots.  I was still sailing with 2 reefs in the Main and almost all of my no 2 jib out. It was time to reef the sails.  It worked out to be perfect timing because as soon as I finished reefing I was getting hit with 45 knots of wind and rain that was sheeting sideways. I also altered course to the NW following Bob's instructions.

Basically the 45 knots that I was sailing in all afternoon was just the trough ahead of the storm. There is a low pressure system to the west of me that will deepen into a more aggressive system by the time it gets just to the east of me.  By sailing west, a little way we might get lucky and miss the more aggressive section of the storm. Currently the largest gust expected is 50 knots however that is purely a guide line and better safe than sorry.

So, I am now watching the wind direction, I was sailing in mostly NE winds all day but they are starting to back. I currently have NW winds sailing close hauled in 30 knots and when they alter to the West I can then tack and make a NE heading. The goal for tonight is to get North to get me out of the largest of the swell due over the next few days so a bit zig zaggy……. but for all the right reasons.

I remember when I first started sailing I use to love sailing up wind with the boat pounding through the waves and everything on a 45 degree heal.  I am now more mature and think that the world should be sailed down wind.  Life sailing upwind is just so much harder.  Making dinner, going to the loo, you need to be holding on constantly just so that you don’t get thrown across the cabin by a big wave.  You put something down and 30 seconds later it is on the other side of the boat…  Nothing is safe when you are sailing upwind in 30 knots but once I can throw that tack in and the winds shift I should be sailing on a beam reach which will make life a whole lot easier….. so when you are all enjoying your stable kitchen counters making dinner tonight or your big beds, spare a thought for me and my roller coaster of a living space.

Enjoy your evening everyone.  I know I will be.

Update – Winds gusting 60 – 65 knots from the WSW and steady at around 50 knots. Just got back off the deck from adjusting the sails. I have the smallest bit of jib and 3 reefs in the main sailing on a reach. Boat is handling it really well and there is not much swell which is a blessing. Still have not had dinner… made it but have not had a chance to eat it so will have that now.