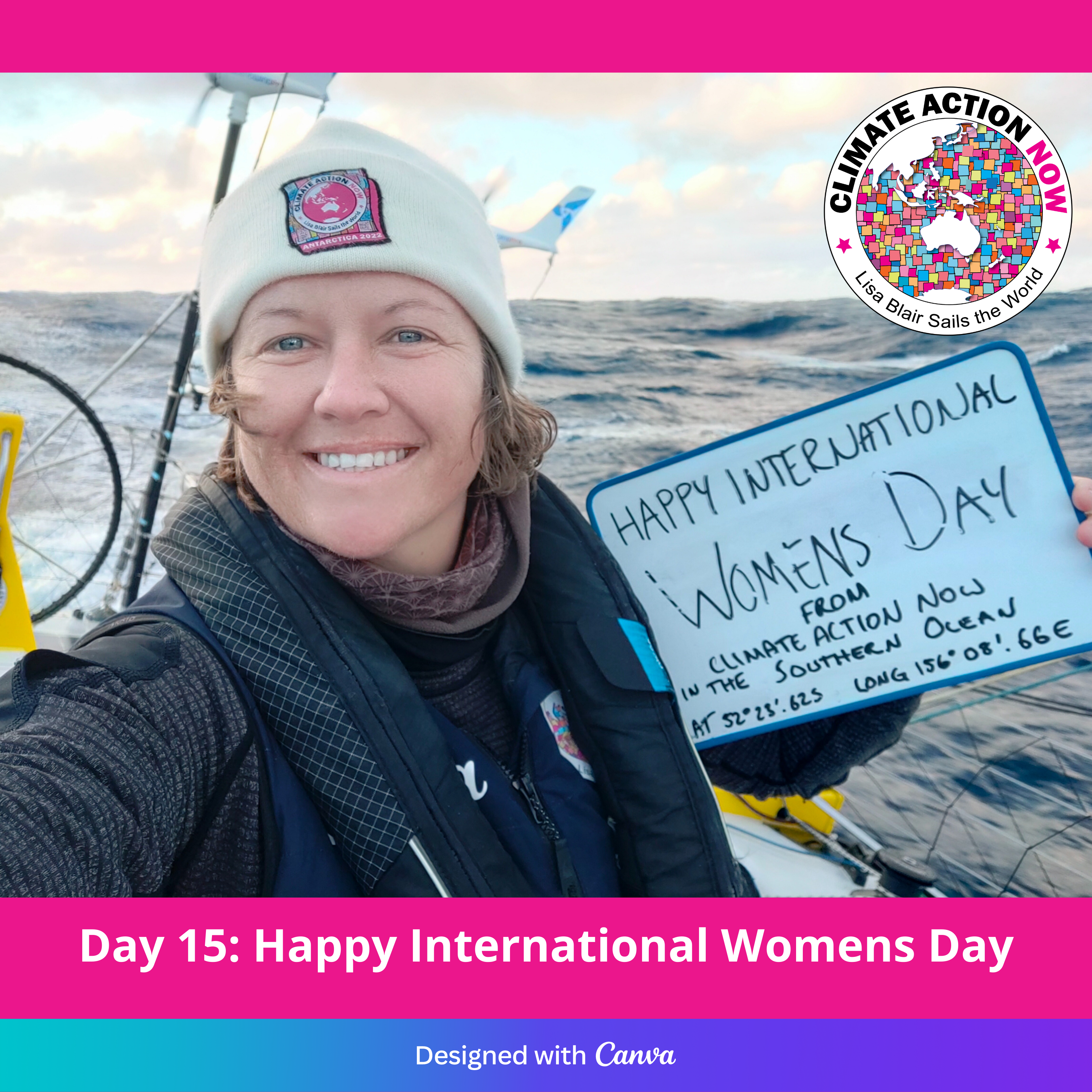 Just under three weeks ago, on Monday February 21, Australian sailor Lisa Blair set sail from Albany, WA in a second attempt to sail solo, non-stop, around Antarctica in record time aboard her yacht ‘Climate Action Now’.

In her latest blog post, Blair makes more sail changes as the wind strength fluctuates and she works on the generator. She also celebrates a major milestone of this trip – the passing of the International Date Line.

What a long day I have ended up having today.  I know I have been saying that a lot lately but today was quite long in comparison as I tried to tick off all the jobs I have left to get done before the next round of bad weather closes in.

And as usual it all started with a night of broken sleep.  I managed to get to bed around 1 am local time and I had set my alarm to wake me in 2 hours to check the winds.  They were still blowing in at 30 knots from the SW when I shut my eyes.  Not even an hour later we were wallowing in 15 knots of wind with three reefs in the main sail and the storm jib up.  And because we still had a large 3–4-meter swell around, Climate Action Now was getting rolled by the swell and the boom was banging back and forth.

I rolled out of bed and put my Dubarry boots on before rubbing the sleep from my eyes as I tried to wake up enough to go on deck.  I donned my life jacket and tethered myself to the deck before climbing out of the main companionway hatch.

As I looked around me the raging winds that I had been experiencing all afternoon were now gone and in its place a light 15 knots of wind and a clear sky filled with stars that was dotted by the occasional cloud. I couldn’t believe what a difference it was from 45 minutes ago when I went to bed. I didn’t think that the lighter airs would last so I decided to keep the reefs in the main sail and just put out the No 2 jib to give us enough steerage over the waves before going back below and climbing right back into bed.

The winds were also starting to veer from the SW to the NW and this was an anticipated change for the morning but it was a few hours early so I wanted to give it an hour before looking to put in a gybe.  In the end I decided to wait for first light as that was only a few hours away and I would be able to see what I was doing.  Catching a few more hours sleep before I was once again blearily eyed and back on deck, only this time I was squinting into the sun.

I gybed the boat before assessing if I should change the sails over. From what I could see between naps the winds had remained mostly around 15 knots with the occasional gust at 18 knots, so I felt comfortable to shake out the third reef and hoist the whole of the main sail.  But as I watched I started to see a bit of a change in the sea around me and we started getting wind 22 or 25 knots, and that was just outside the range a full mainsail.

I opted instead to play it safe and hoisted to the first reef, allowing for enough control over the waves but not too much sail area if the winds built some.  I made a quick hot breakfast (you guessed it porridge) and then got to work on the job for today.  Re-plumbing the generator to bypass the fine fuel filter.

Chris Hibbs from LMH Repairers in Albany and Refuelling Solutions supplied me with a second hand three-cylinder 20HP Volvo Penta motor and added an alternator to it.  Because it was second hand, and we were so short on time, there are a few things left to tweak while sailing.  The first one is that we think the bio diesel is just a fraction too thick for the fine fuel filter.

Today’s job is to re-plumb the engine and bypass the fine fuel filter.  On land this is a quick job, but it becomes 100 times harder when you’re bouncing all over the place at sea.

I gathered all my tools and made my way back to the Lazarette compartment.  I have some jerry cans of spare fuel stored right in front of the generator so I needed to re-organise the small space to allow for a work area before I could get to work.  The winds had built some more so we were also bouncing all around. The compartment is so small that I need to be sitting on the floor of the boat to have my spine straight, otherwise you are curled up in a ball to fit in there.

I ended up taking the hose of the intake to the fine fuel filter and putting in on to where the injectors were before putting the generator covers back together and when I returned to the deck it was nearly 2pm in the afternoon and the winds had built to 30 knots. Once again, I was overpowered.

The winds had also veered further around.  I was now sailing in NW winds of 25-30 knots and occasionally I would get a gust of 35 knots just to keep it interesting. I needed to put those two reefs back in the main sail. It was just in time too, as the winds started blowing at an almost steady 35 knots.  I finally tidied up everything and then took note of where I was.

Today is a bit of a milestone because I was able to sail across the international date line.  This is a magic line in the water where the longitudes transition from an east longitude to a west longitude and it is exactly halfway around the world from Greenwich where the universal time was set, also known as the Greenwich Mean Time.

This is the time code zero, and the rest of the world are either plus or minus depending on where you are in the world.  As I have been sailing, I have needed to change the time an hour for every 15 degrees of longitude sailed.  However, when you cross the international Date line traveling eastwards you end up needing to go back a full 24 hours in time and basically repeat the day again so I get two Sundays but I will now be a full day behind Australia date wise.

I crossed the International Date line around 5 pm before finally going below.  Another thing to highlight is that today marks five years to the day when I sailed around Cape Horn in a force 12 gale during the last record so it is a double meaningful day.

I know that there are some large seas and strong winds coming that are going to make life a little difficult aboard so I also opted to top up the metho in my little metho stove and grab out a new food bag so I am very excited to have a full supply of new freeze dried meals to choose from.

I also managed to get in a zoom call with my family.  With my partnership with Pivotel and Canva I have been set up with a vessel link iridium system and it is just powerful enough to allow me to participate in a zoom call.  It was great to see every one’s faces, especially as Dad was in hospital a little over a week ago. It makes a huge difference in me feeling connected while alone at sea.

So now I am full and warm and so ready for bed after such a long day, but before I go I would like to thank the following degree sponsor for their support.

Thank you to:
180 East/West – Glass Australia – Huge thanks to Claire, David, Shelia and Renee Weatherly for your amazing support and jumping in to support me with a full 10 degrees.

The winds are still blowing at 30-35 knots and the seas are building so I am going to get a little sleep while I can.