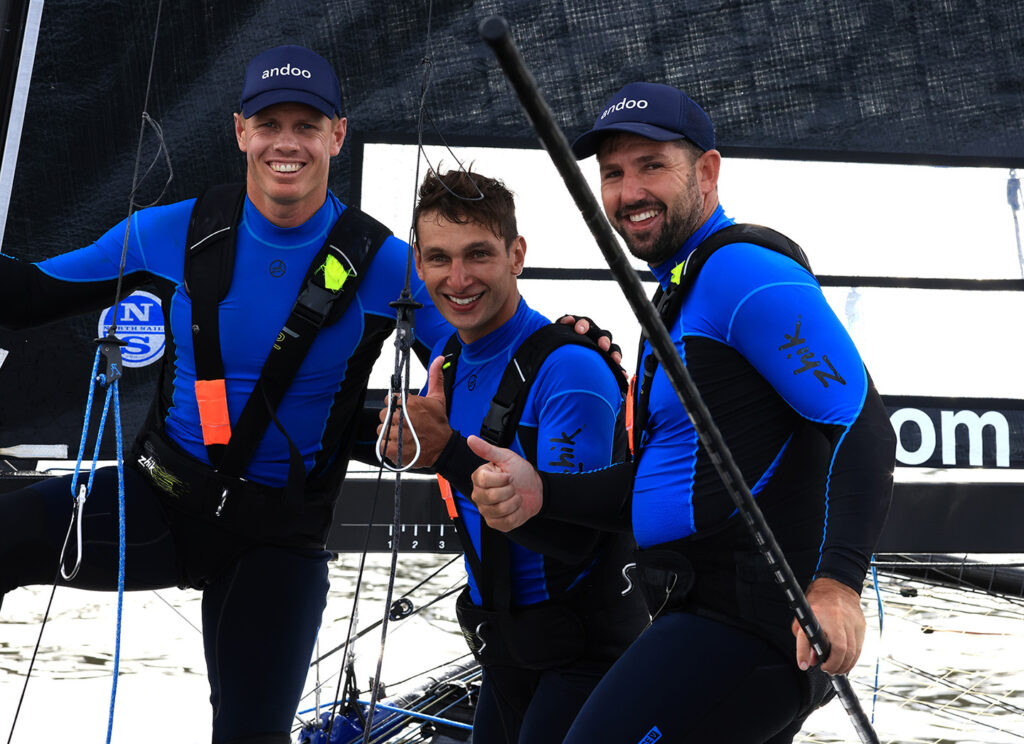 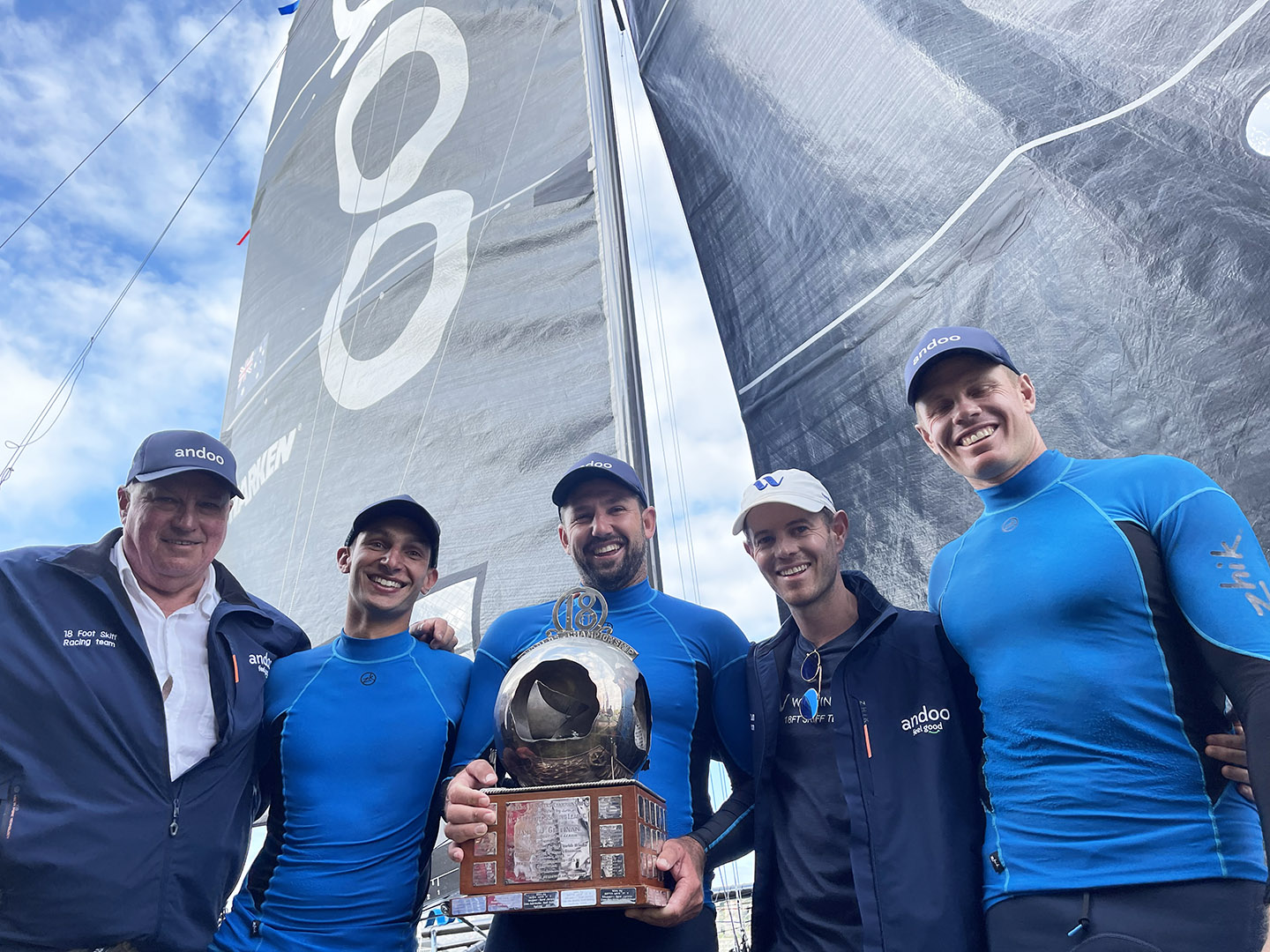 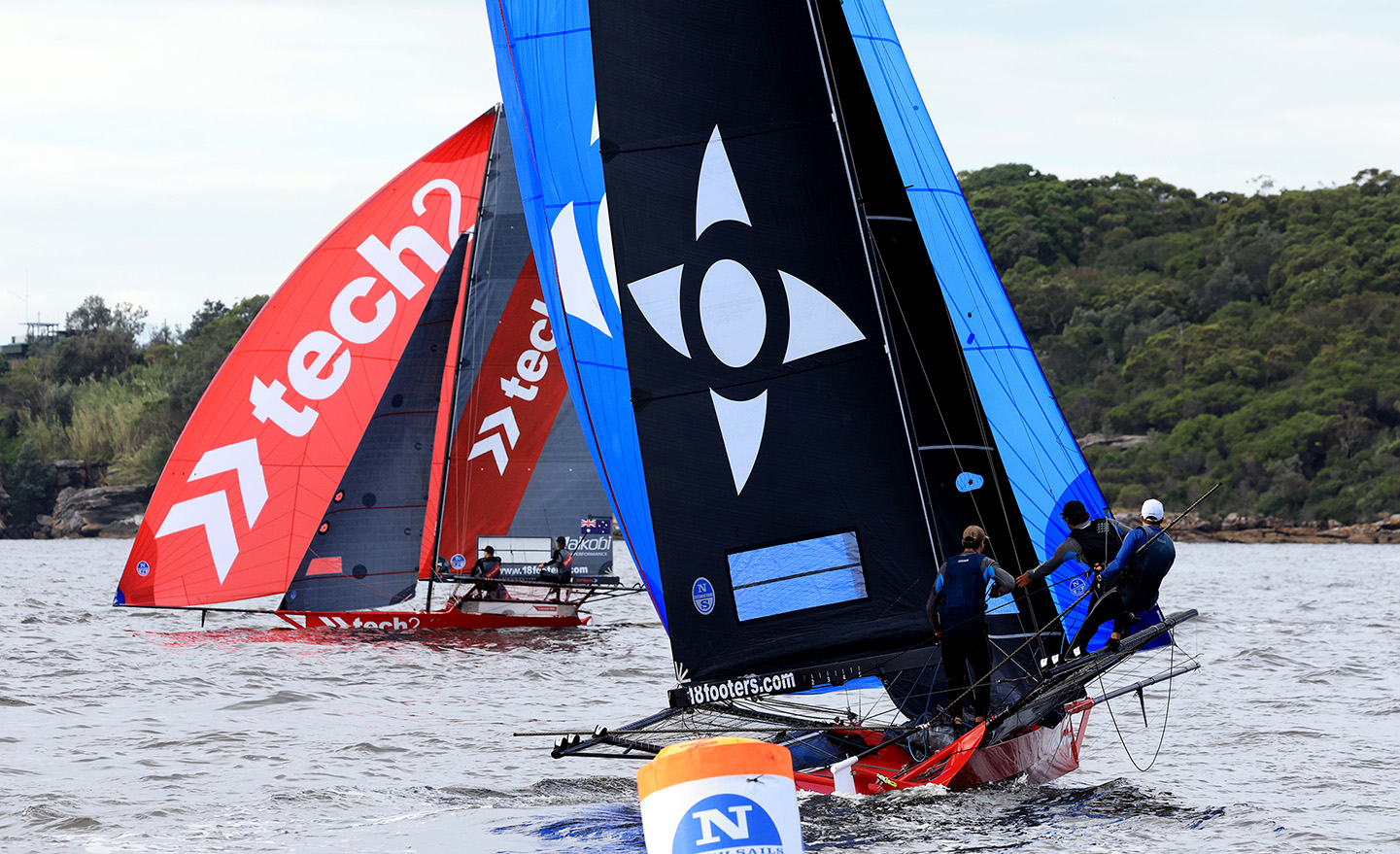 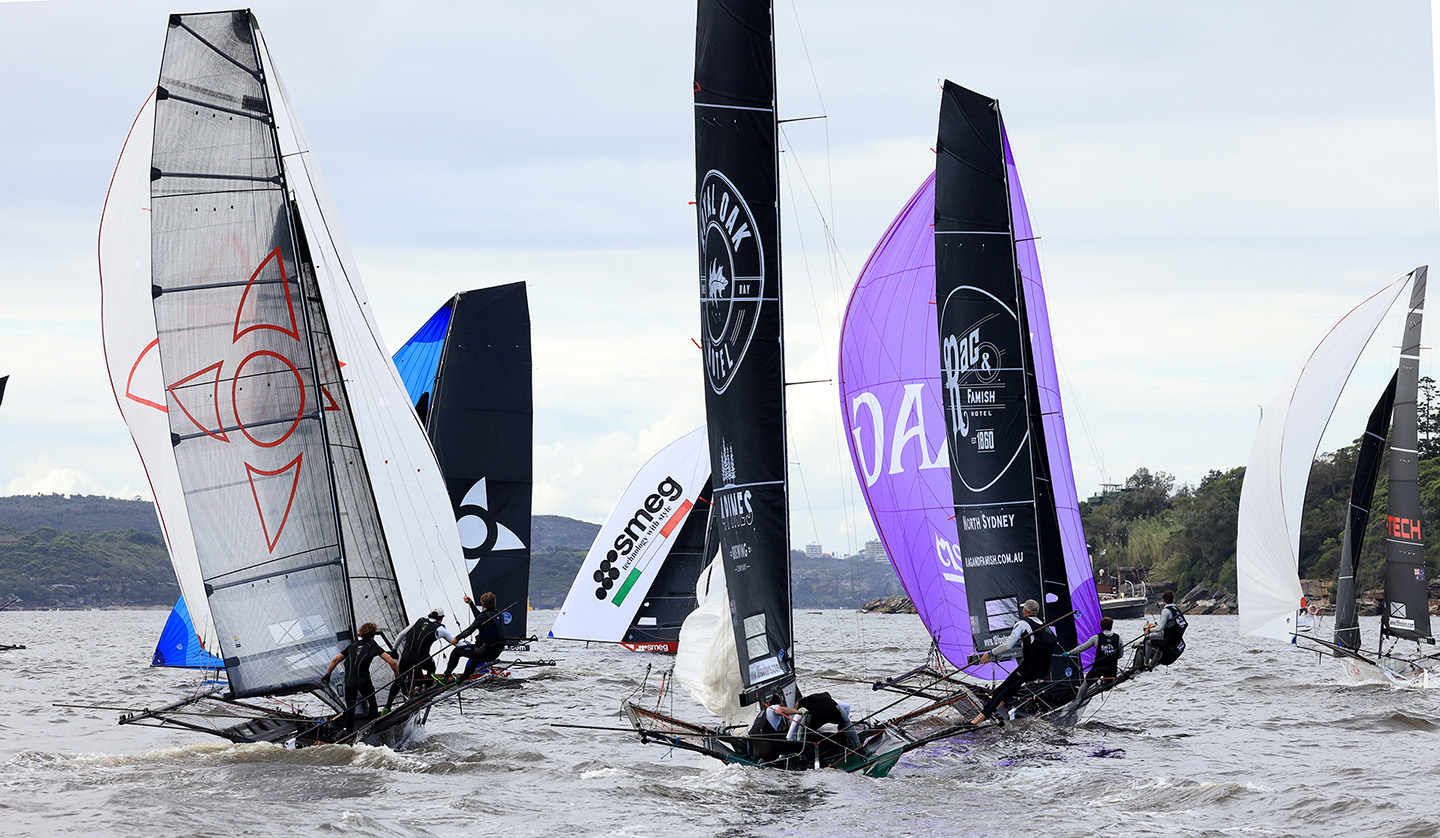 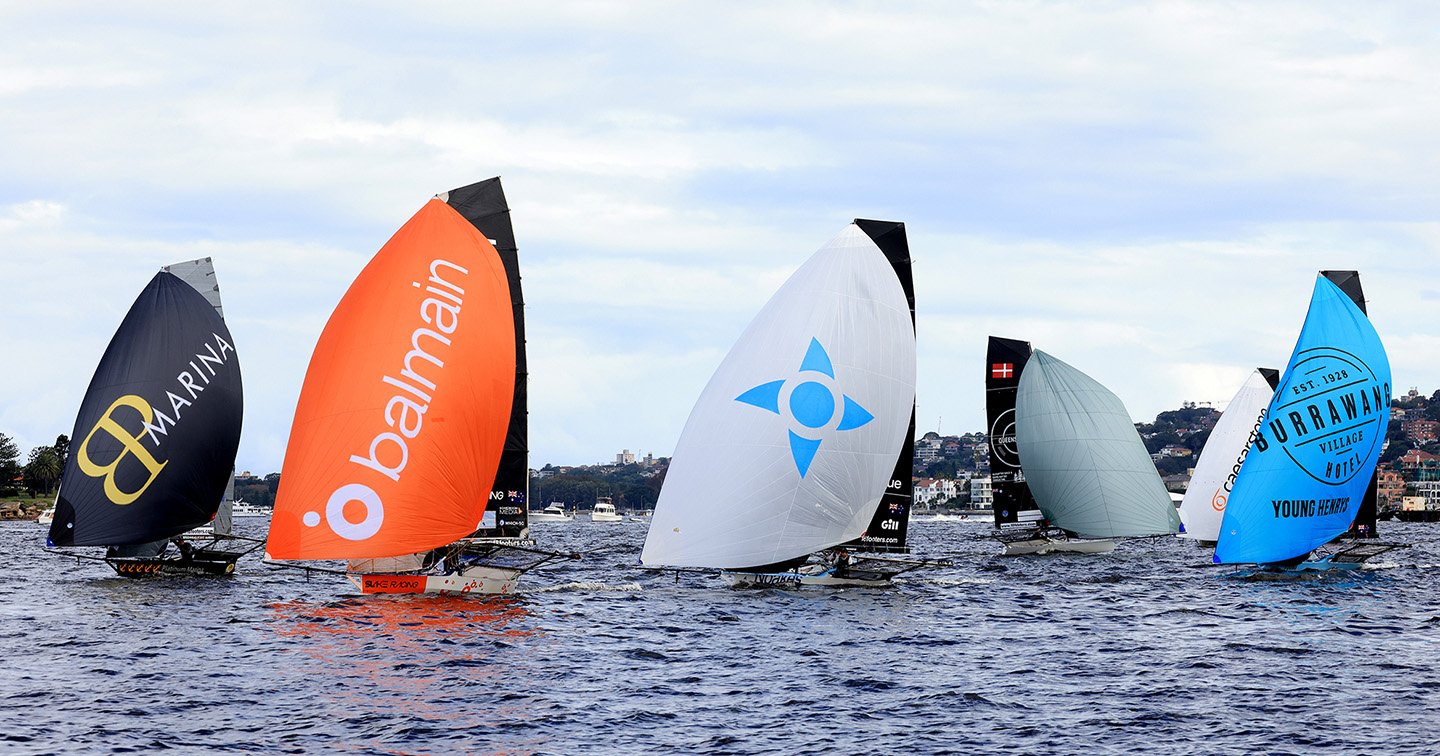 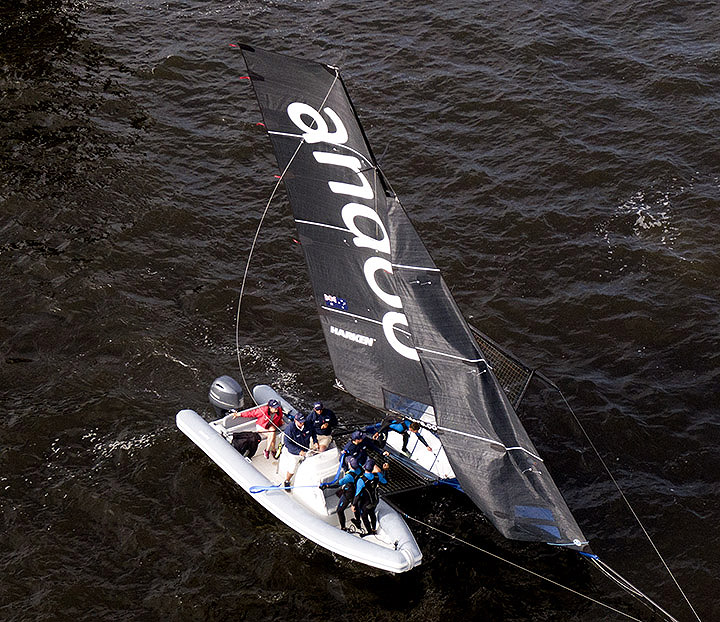 The Andoo team of Seve Jarvin, Matt Stenta and Sam Newton officially became the 2022 JJ Giltinan 18ft skiff champion, although it was in an unbeatable position before going into today’s final race of the championship on Sydney Harbour.

Andoo’s victory gave Seve Jarvin his ninth win, eighth as a skipper, in the world’s most valued 18ft skiff championship and bowman Sam Newton his seventh.  For sheet hand Matt Stenta, who joined the team this season, it was his first in the 18s after winning the Australian 16 footer championship two years ago.

It was a remarkable performance by the talented trio who dominated the Championship with five consecutive victories in the first five races completed in the regatta.  The team’s only losses, when runner-up to Noakesailing  and Finport Finance, in the two races held last Friday assured it of the title before going into today’s final race of the championship.

The performance was so dominant that the team also took out the handicap section of the Championship.

In today’s race, which was sailed in a very light SE breeze, the Andoo team once again proved their class with another brilliant performance to defeat a fast-finishing Rag & Famish Hotel by 2m53s, with Noakesailing (Sean Langman, Ed Powys and Josh Porebski) a further 8s back in third place.

Andoo’s team chose to sail to the east of Shark Island on the first beat to the top mark while most of the fleet went to the west and when both groups met near the mark Andoo’s move proved the winner as the skiff held a 20s lead over arch-rival Tech2.

Most of the fleet elected to sail east of Shark Island on the spinnaker run back to the bottom mark while the young Noakes Youth team went to the west and actually joined Andoo in the lead as the pair rounded the twin marker buoys.

On the following beat to the top mark in Rose Bay, Andoo went far left while Noakes Youth and Tech2 again went to the west of Shark Island.

This time there was no doubt about the lead as the 2022 champions had raced away from the rest of the fleet, with a big lead over Noakes Youth and Tech2 as spinnakers were set for the run to the finish.

In a fickle breeze, Noakes Youth and Tech2 were caught out as the teams on the left hand side of the course came home with better breeze, relegating Tech2 and Noakes Youth back to fifth and seventh places respectively.