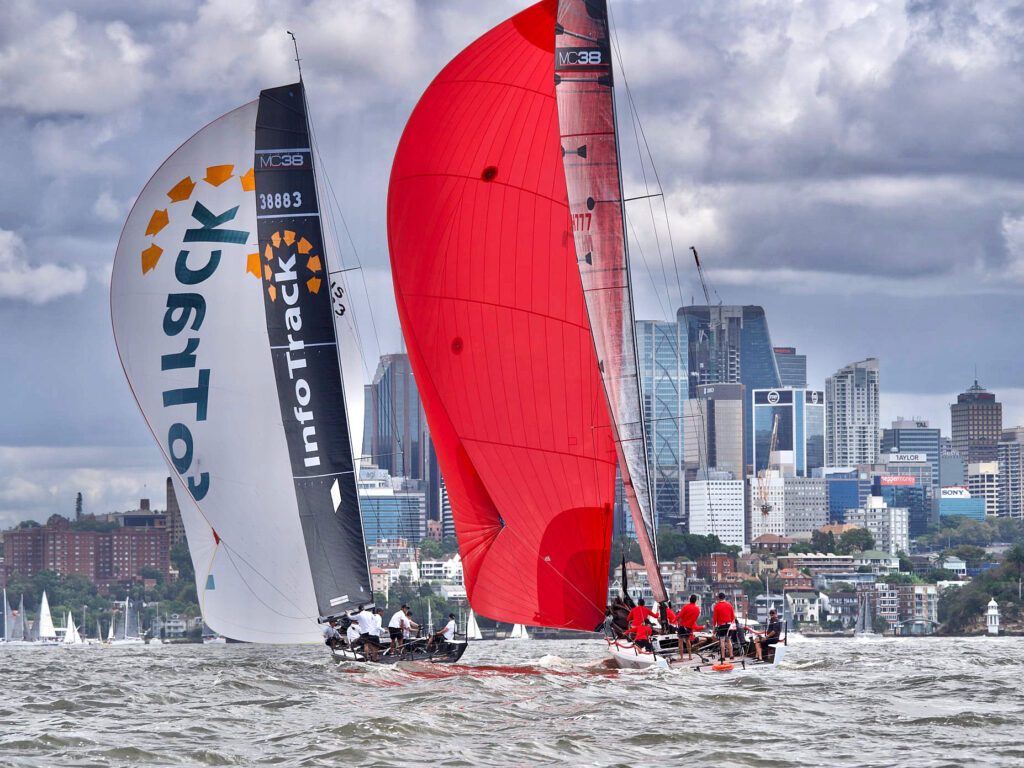 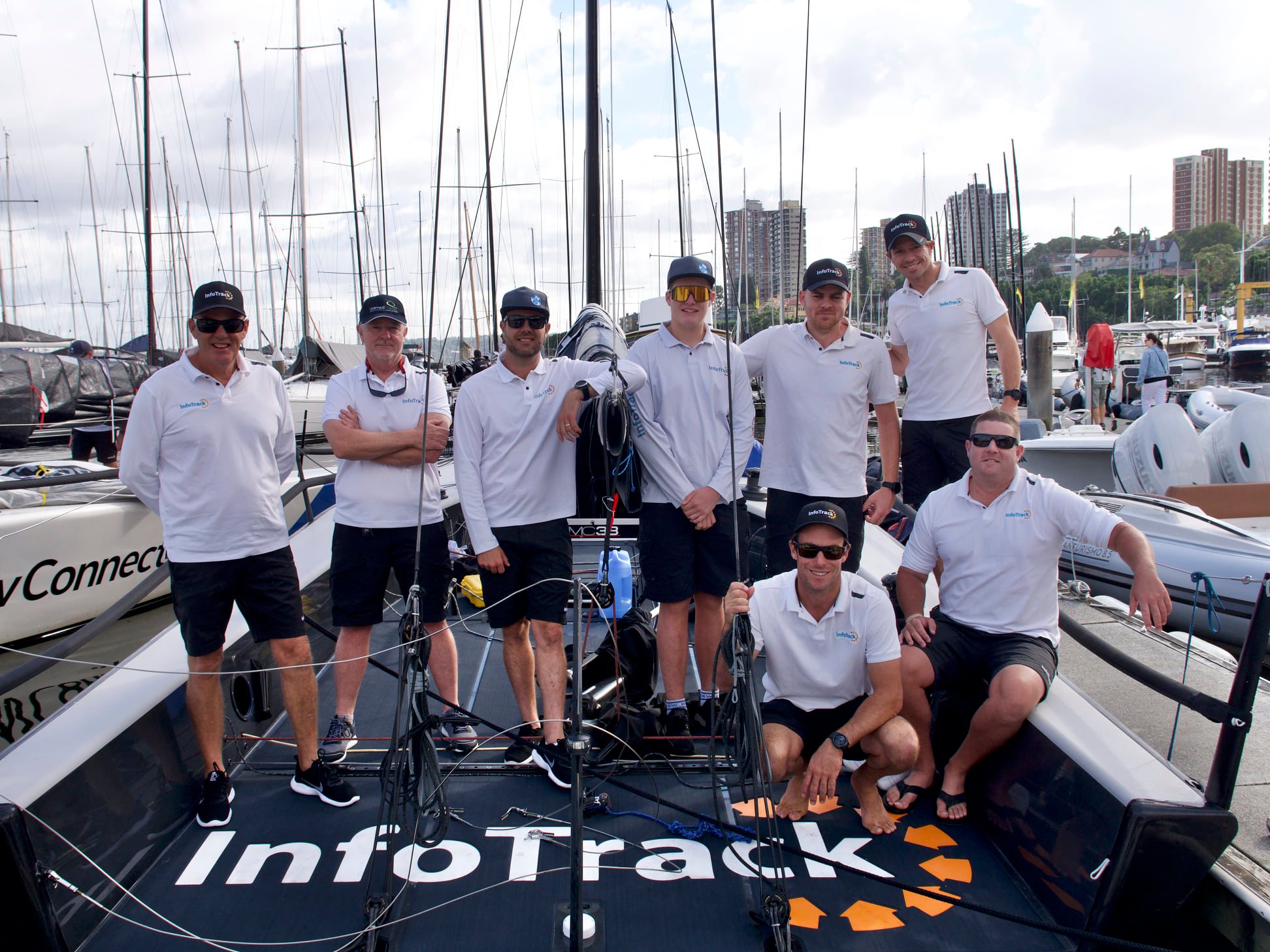 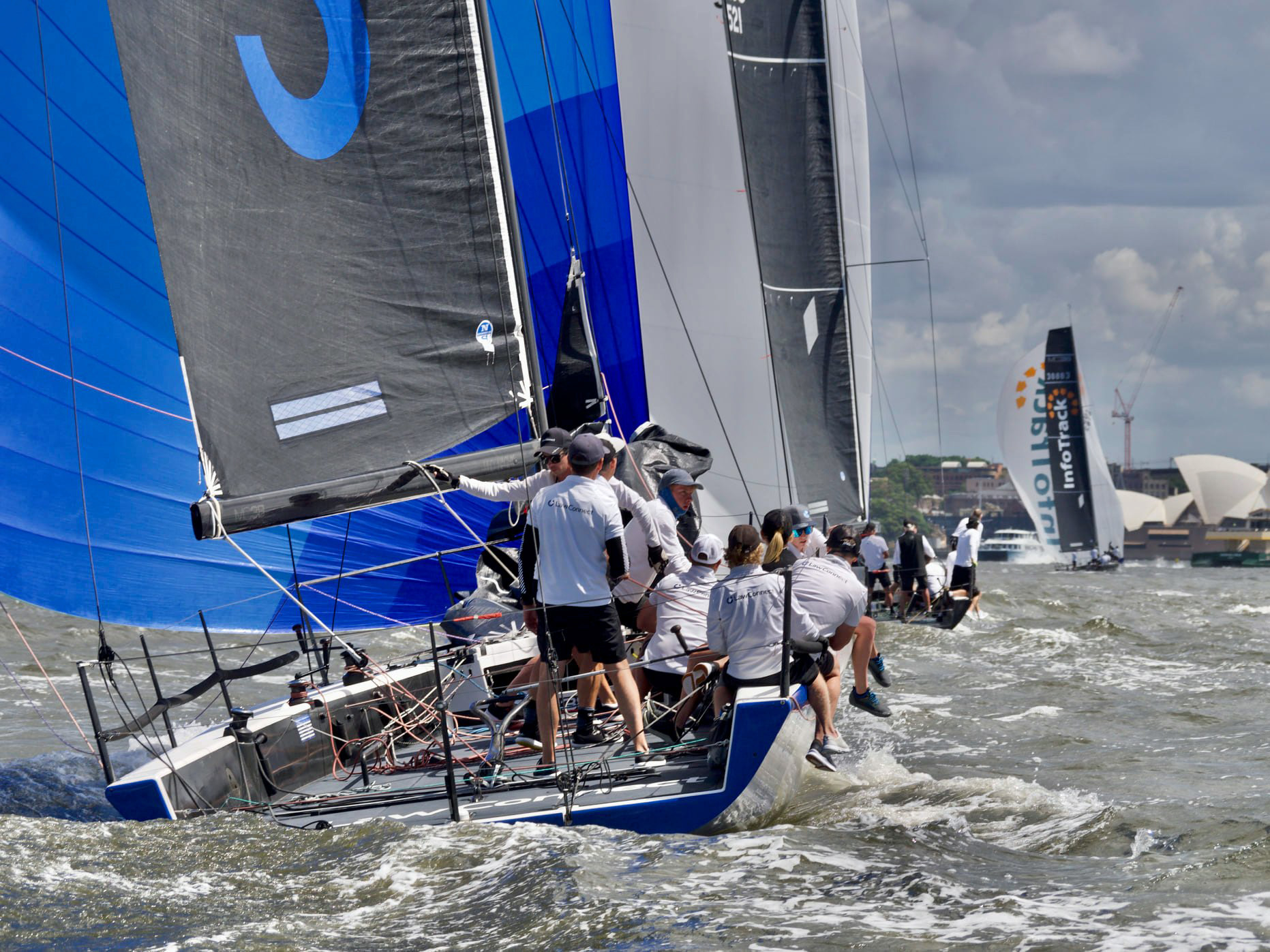 Pete Cummings stepped onto the MC38 InfoTrack for the first time in Act 2 and helmed the boat to a brilliant shortened series victory on a busy Sydney Harbour.

Cummings, who grew up sailing on Lake Macquarie and has enjoyed a lifetime of ocean and class racing, said he had to suppress his normal helming instincts and just follow the crew’s instructions.

“It was a great thrill and a privilege to be asked by Christian to drive his boat,” Cummings said. “The MCs are fantastic – very responsive and powerful and you can feel the guys constantly working the boat, particularly in light and variable winds. I was completely confident with the skill level on the boat and just had to listen; it all worked like magic. Sneeze and you’d lose two places though!”

Navigating around multiple club fleets, replica 18-footers, the JJ Giltinan 18ft Championship, dinghies, party boats and a container ship was not for the faint-hearted. “There were more boats on the harbour, both competitors and general activity, than we’ve seen since pre-Covid times,” Cruising Yacht Club of Australia race officer Steve Kidson said. “The last two races we had competitors through going our finish line – in both directions! It was hectic.”

Tactician for the second-placed Hooligan, Ben Lamb, said Marcus is really getting the hang of driving with wheels as opposed to a tiller: “It’s a big change – we feel it will be a good improvement moving forward. My favourite moment of the weekend was winning race three after an average start. Generally we weren’t having the best starts, but the crew morale made me relax and able to grind us back through the fleet. Everyone’s positive and that makes the guys sail the boat at 100 per cent and allows me to loosen up and see the breeze.”

Another third overall for Ginger, including two bullets, shows Leslie Green’s CYCA team are building nicely for the 2022 MC38 season made up of six acts between Sydney Harbour and Pittwater, a potential fleet appearance at Hamilton Island Race Week in August and an Australian Championship in November. For the full schedule, see: https://mc38racing.com/events2022

Kidson said Saturday’s first two races went ahead in light ESE winds and in the latter part of race two the breeze clocked around to the northeast at 8-12 knots and the course was shifted to run the fleet up to Steele Point at Vaucluse.

Sunday March 13 started with crews AP’d ashore while Kidson kept an eye on the wind observations. The fleet of eight boats eventually lined up at 1330 hours in NNE 7-8 knots but on the first downwind run a 40-50 degree shift preceded a fizzle-out, leaving Saturday’s scores the winning set of numbers.

Middle Harbour Yacht Club will host Act 3 of the MC38 season May 14-15 on Sydney Harbour.

For the full results, see: https://app.sailsys.com.au/club/121/results/series/1565/pointscore?handicap=s