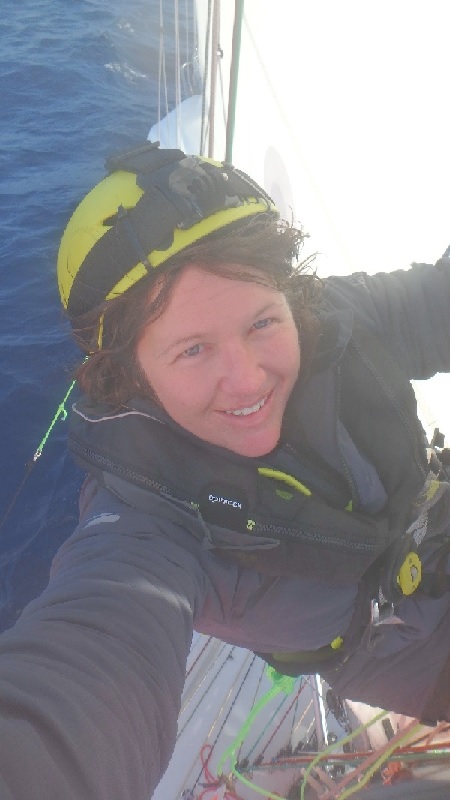 Last night to my great disappointment the winds maintained 8-10 knots from the North to North West and even with the Full main sail and the genoa out I was only able to get 5 knots in speed over ground.  I was racking my brain as to why, I either have something caught on the keel or an adverse current as I normally would be making 6-7 knots in those conditions.

Given how close I am to rounding my mark and crossing my track to complete a full circumnavigation I am itching to keep my boat speed up so I was annoyed that the boat was going so slow and nothing that I did with the sail trim added to the speed.

I spent hours just staring at the B and G zeus watching my dismal boat speed kicking myself…  At 3am the winds started to build to 20 knots so I put the first reef in the main sail and changed out the genoa for the stay sail.  Climate Action Now was still doing the 5-6 knots of boat speed when she should have been easily  doing 7-8 knots with that arrangement.  I started grinding my teeth glaring at the displays daring it to make me go faster…  It didn’t make a difference I was simply plodding along.

At 5 am the high wind alarm sounded and out of nowhere I was getting 30 knots of wind.  I was still sailing with the first reef in the main sail and the whole of the stay sail out. It was sheeting rain on deck and the boat was getting mostly laid over on her side.  I wasn’t really going forward anymore, but drifting sideways.  As the mainsail was mostly luffing in the wind I decided to furl away the staysail on the Pro Furl (supplied by wichard Pacific) first, as I through this would be the first to go given the scenario.  Once that was furled away I madly started lowering the main sail to the second reefing point.  Just as I finished lowering it the rain stopped and the winds seemed to pass.  I finished putting in the second reef and when I had the chance to look around I was surrounded by blue skies and I could see the departing end of the squall to my right.

The winds had backed to the west and dropped right off to 8 knots on the back end of my storm.  So, seconds ago I was getting completely blasted and now I am lolling around in the swell with barely a breeze to fill my sails….  Ahhh.  Steady winds just seem like too much to ask for at the moment….

I was tired and grumpy, as I wished to be back in my warm bunk cuddling my hot water bottle.  Instead I needed to shake out to the first reef again, so I at least had some chance of moving forward…  Sucking it up I got to work and shook out the reef and also unfurled the stay sail.  I contemplated shaking out to the full main and putting the genoa out but I didn’t think that the light winds would last.  Often after a squall you will experience a short period of light winds before the steady winds return, so I was hoping that was the case for me.  Also, my bed was calling.  I thought that I would try for two more hours of sleep as I was up most of the night. If the conditions were still light then I would look at shaking out to the full mainsail.

I was again back to little boat speed as I was also now sailing under-cooked with the amount of sail up… and I knew there was something slowing me down.  I managed to discover the culprit when the boat was drifting more sideways than forward in that squall.  I just managed to glimpse some long strands of kelp wrapped around the keel, put there simply to test my patience – a test I was failing at.  Right now, there was very little I could do about it.  I hoped that it would simply fall off on its own but that would probably be also asking too much.

The only way to get the kelp off is to dive overboard and pull it off, or try to push it off with the boat hook or sail the boat backwards….  I know it is possible to sail backwards, it is just not something that is that easy to do on a boat of this size.  A dinghy sure but with a 50ft yacht solo it’s no easy task.  I have done it once on a 68ft boat to sail off a crayfish pot, but that was with a full crew which helped a lot.  In any case I have already had a major job to complete today, so the keel will have to wait.

I needed to climb the mast while the conditions were still good.  About a week ago I started to notice some discoloration on the Diagonal lower rigging wires called D1's.  I had been watching them closely as this was also something that happened on the last rig before it came down and I was petrified that the same problem of electrolysis was occurring again.  I am so close to the finish and the last thing I needed was the idea of the mast coming down playing with my head.

So, today I sought some advice from the experts and called David from Arcus Wire and rigging.  David explained that stainless steel can sometimes get something called a tea stain on it but that this doesn’t hurt the rigging wire at all and that this was most likely what I was seeing.  But as well as I could describe it, I would sleep a whole lot better with some redundancy on the rigging wire.

I am completely aware that I am most likely just over reacting but after what I went through it is a little understandable.  Also, as amazing as Edward Williams Marine Insurance and Northern Reef Insurance have been to me, I find it rather unlikely that they would pay out twice in 12 months for a new mast…  So, I went with the cautious option that means I will sleep soundly.

I decided that I would climb the mast to the lower spreaders (the horizontal mast supports) and run a secondary dyneema line around the attachment pin and secure it at the toggle at deck level.  Dyneema is an incredible strong rope and would work in lieu of a length of rigging wire should the worst occur. All my ropes are Lancelin lines and were kindly supplied by My Yacht in Sydney.

I have a self-climbing mast system on the boat for just this occasion so I dug that out and my climbing harness, set the boat up and all the lines ready to go, donned my Gath Sports Helmet and started the arduous task of hauling my ass up the mast.

A self-climbing system is great and a necessity if you need to climb the mast solo, but it is quite physically taxing on the upper body.  The system consists of two ascenders, like rock climbers use. I winch a climbing rope tight and then attach the two ascenders.  The top one is shackled to my climbing harness and the lower one has two foot-straps for me to stand it.  Then, what I do is sit in the harness and pull the lower ascender up as high as it can go.  Then standing in the foot straps I push the top ascender as high as it can go.

It is slow progress and I get about 15-20 cm each lift. It is also really taxing on your upper body strength, but it does allow for a way for me to safely climb the mast.  I descend the same fashion but in reverse order.  All in all, it took me a little over an hour to climb to the lower spreaders, attach my two dyneema safety lines and return to the deck. It was 4.30 in the afternoon by then.  I finished off the job by lashing the lower ends of the dyneema to the turnbuckle of the D1's and tried to get as much tension as possible.

Now whilst I really don’t think the mast is going to come down, I have now taken the right precautions just in case. Now I will be able to get a bit more sleep tonight and feel more comfortable when tackling the easterly blow that is on its way.  I kept the first reef in the mainsail while I was up the mast as the winds were expected to increase, however apart from a few smaller puffs the winds were still 12-15 knots.

I decided to just leave the sails as they were as in an hour’s time I was expecting 20 knots.  In hindsight, I wish I had have spent a little extra energy and shook out that reef, as the winds didn’t arrive until 10pm, so I spent a few more hours going slow…

I will have to try to do something about that kelp tomorrow as I really feel like I am losing 1-1.5 knots of boat speed with it on the keel and that is really driving me nuts.  Anyhow, nothing will be done about it tonight.  I am now less than 600 nm from turning north however Tuesday is offering me 30 knot headwinds from the east so I am hoping that this system changes a little between now and then.