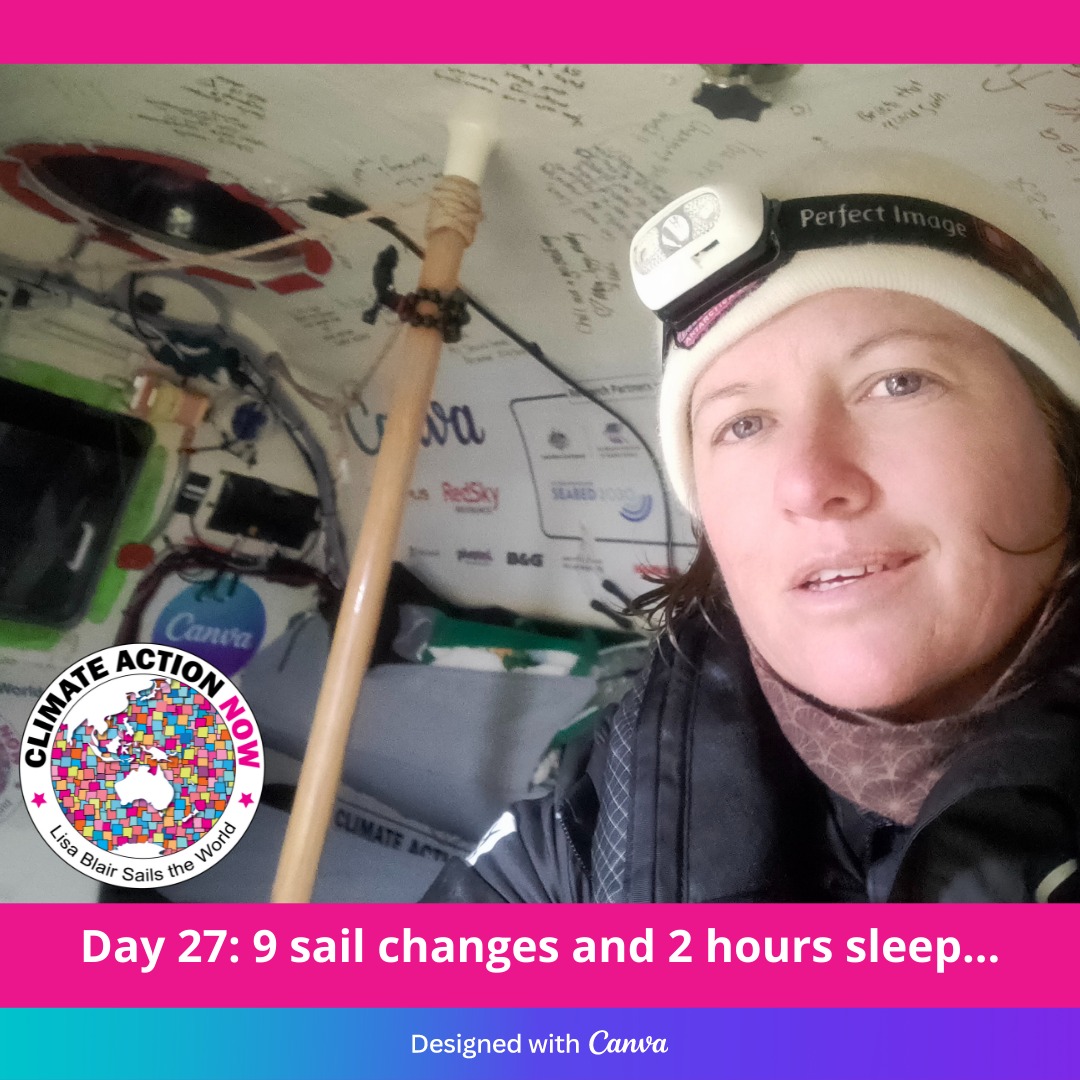 In her latest blog post, Blair once again struggles to get rest in changing wind conditions.

Again, all the best intentions to get sleep and the weather gods just can’t let me have it.  I was just prepping for bed at 3 am (I know, my body clock is all over the place) when the winds built from the SW 15 knots or less that I had enjoyed all night to a brisk 25 knots from the W.  I was awaiting a new system to hit tonight but not in the morning so I wasn’t totally on board with the lets-get-storm-prepped scenario, but there was too much wind to ignore.

I crawled out on deck to put the first reef in the mainsail.  The sky was still partially dotted with the fluffy while clouds and there was a small two to three-meter sea around. It was four degrees on deck last night, but I was able to go out in just my Musto thermals, Dubarry boots and lifejacket, and stay mostly dry so I was taking the win.  Back inside I thawed my hands and climbed into bed for some much-needed sleep.

It felt like I had only just closed my eyes and when I was woken up by the boat rounding up in strong winds and all the alarms going off.  Looking at the B & G Zeus Display by my bunk I could see we were getting 30 knots coming through and coming through hard.  I dragged myself out of my lovely warm bunk and put the second reef in.

I ‘ummed’ and ‘ahhed’ about going all the way to the third reef in one sail change but ultimately the winds weren’t due to build like this until the afternoon so there was every chance that I would shorten the sails only to need to hoist them again afterwards.  Job done I climbed back into bed expecting to be able to sleep for a few hours at least when the winds started creeping past 30 knots, well into the ‘I need to get my jib down’ phase.’

So back on deck at 6am now and the day has risen, and a previously blue sky was turning all types of grey.  The sea looked like it was rapidly changing with it and as the grey stretched over the sky you could see the wave formations starting to break and shortly the sea became a frothing ball of violence.

It was 8am by the time I went below again so I decided to make some breakfast and then go to bed and try for another sleep.  It was 11am by the time I got my head down again only to start getting alarm after alarm as we rounded up in the still building winds.  I went back on deck to set the third reef in the mainsail before attempting another sleep, but the reality was, it wasn’t going to happen.  I think I managed all in all about two hours of heavily broken sleep and enough sail changes to feel like I had done several workouts at the gym.

I changed the micro plastic filters over and by then the winds were up to 45 knots and we were getting tossed around like we weighed nothing. I finally caved at 8pm and went on deck to set the fourth reef in the mainsail.  I was freezing by the time I got below so I set about making a hot dinner of baked beans and cheesy pizza pockets.

I was watching the winds closely and just as I was finishing my dinner suddenly there was a large wind shift from the WNW to the SW and the boat was put through an involuntary gybe instantly. I rushed on deck and completed the gybe and thankfully nothing was broken.

It started to rain so I ducked under the cuddy, and wouldn’t you know it, not an hour after I set the 4th reef in the mainsail the winds ease off and we started getting 25-30 knots again as a stable wind and I couldn’t see a 50 knots gust in site. With a deep calming breath, I set about shaking out the mainsail to the third reef.

The wind shift and the rain indicated that we were through the worse of the storm and while the winds were still going to be around 30 knots that’s a lot different from 40. I was planning on going to bed soon and didn’t want to end up having to either go slow or get up and shake out the reef later on.

So now we have a muscle tired and sleep deprived Lisa whose bunk is just yelling my name at me, but before I go I wanted to thank the following degree sponsors.

So a huge thank you to:

146 West – d’Albora Marinas, Cabarita Point, Sydney Harbour – Huge thanks to d’Albora Marinas and did you know that you can syndicate across there marina range with three locations in Sydney alone.