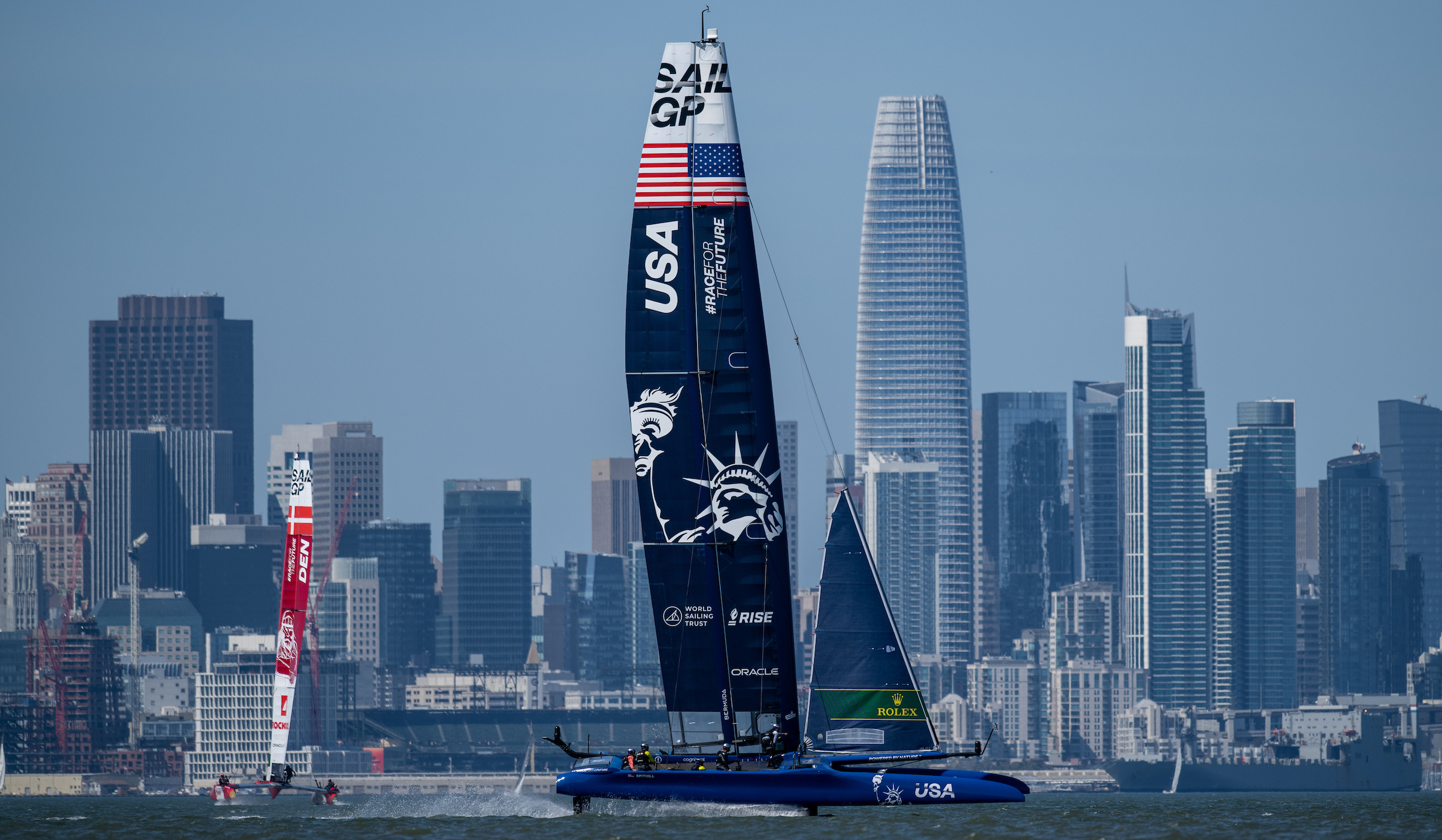 One week until the SailGP Season 2 Champion is decided. Pic - SailGP

With exactly one week to go until the SailGP Season 2 Champion is crowned, teams took to the iconic San Francisco Bay for the first time in preparation for the Grand Final, March 26-27.

First to hit the bay was the home team, with Jimmy Spithill returning to the scene of his incredible comeback in the America’s Cup in 2013 for the first time. With his place in the Championship Final Race guaranteed, Spithill and his U.S. team wasted no time getting to grips with the F50 and the conditions.

Spithill said: “It was great to be back sailing on the bay. There’s a heap of history here and San Francisco Bay really is one of the best racing venues in the world so it was good to finally get out there on the F50.

“The event’s almost sold out and I can’t wait to see that huge turnout on the weekend. It’s just great to see how much interest there’s been, it’s going to be a massive event in front of our home crowd and I am really looking forward to it. We are the underdogs, but that’s not a bad thing in San Francisco.”

Also guaranteed a place in the final is the overall season leaders and defending champions Australia, driven by Tom Slingsby, who also made their debut on the bay today.

Slingsby said: “It was really beautiful conditions out there today. We had a great session, our boat handling was good and we were practicing a few moves for this weekend. The level was high on the water and it was tough to gain advantage over our rivals in speed. The U.S. team looked strong but we were certainly in the mix so it bodes well for the Grand Final.

The final place in the championship race is undecided although Nathan Outteridge’s Japan team is the front-runner to take the final spot.

Taking place on an iconic race course between the Golden Gate Bridge and Alcatraz, five races will be contested across Saturday and Sunday, before the winner-takes-all, season-deciding final race where the overall season champion will be crowned and take home the $1 million prize purse.

Alongside the SailGP Season 2 Championship, for the first time ever, a second podium will also take place on the Sunday to crown the Impact League winner – the league’s second podium for the planet. SailGP’s Impact League is a world-first, integrated initiative to make sustainability essential to the fabric of the sport and accelerate the transition to clean energy. Currently Peter Burling and Blair Tuke’s New Zealand lead the charge from Great Britain and Australia.

San Francisco marks SailGP’s return to the U.S. after a three-year hiatus, promising to deliver spectacular racing action as the sport’s best athletes compete on the cutting-edge, foiling F50 catamaran – capable of closing speeds in excess of 120 mph as they go head-to-head.

Limited tickets remain for premium on-land viewing near Marina Green or on-water experiences to see the thrilling action unfold on San Francisco Bay. Racing begins at 2pm on Saturday and Sunday. Boat owners are also invited to take their vessels out to watch the racing and can register via SailGP’s Bring Your Own Boat Program. Registered fans will receive all of the racecourse information and a VHF channel to listen to for all the latest updates.

For those unable to attend in person, the action can be watched in over 186 territories, including on CBS Sports in the United States.

Full details can be found at SailGP.com/Watch.

For reference, see the live race timings for Australia: