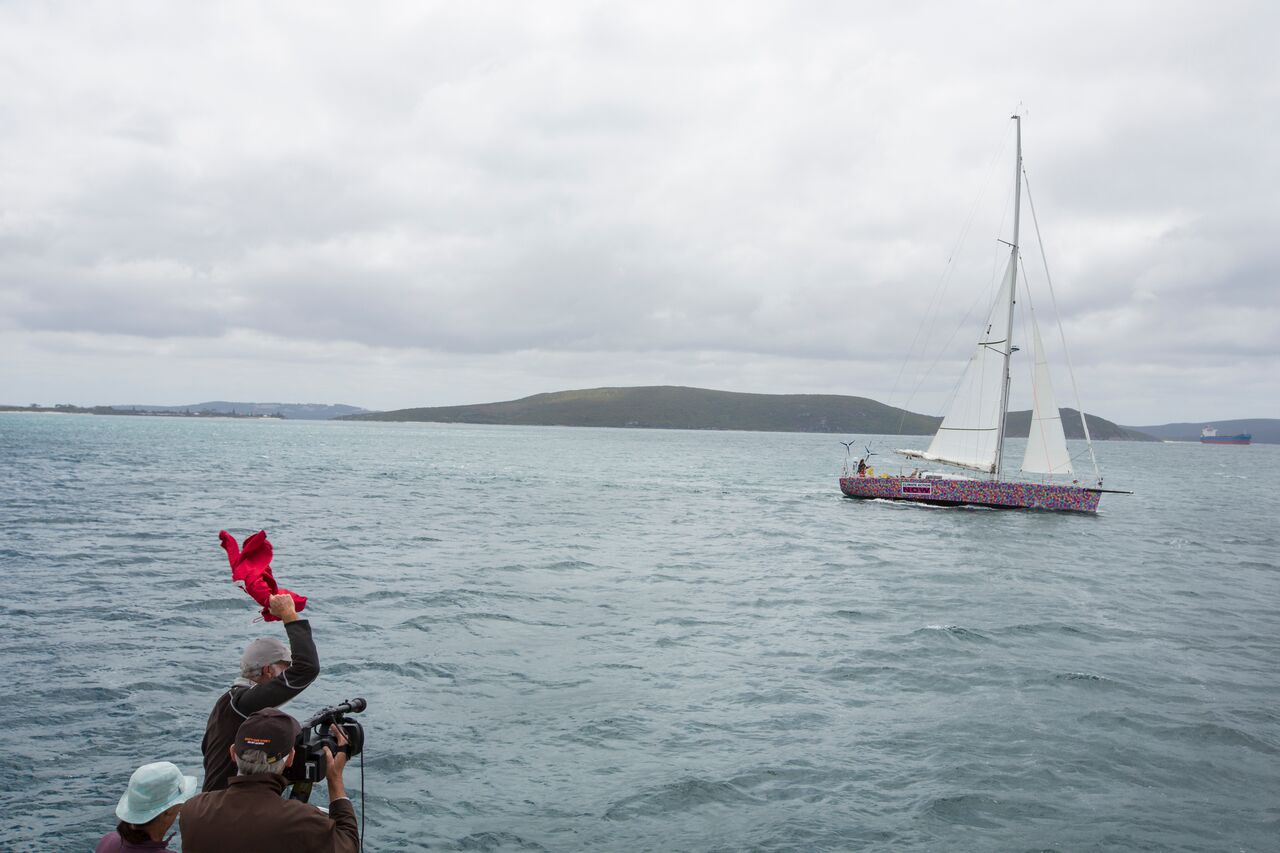 Well I still can't believe I am here sailing south…  This is three years in the making with so many hurdles and set backs to overcome.  There was also so much to get done in Albany that I never really got the chance to just sit and assimilate the challenge before me.  I was a constant blurr of energy going from one task to the next and now that I am at sea I still don't feel like I have left.

To be honest I feel like I am just setting off for a week at sea not three months.  I am sure in a few days once the initial excitement passes I will come to terms with the scale of the challenge before me. I did experience a brief moment where the reality hit home.  It was when we cast of the lines for Climate Action Now and I was getting towed off the dock.  At the time I was so focused on not pranging the yacht in front of everyone and still hadn't had that chance to think “wow”!

We cast off the tow-line and I started motoring her out the Albany Harbour.  Within minutes there was a crescendo of car horns and shouting as everyone lining the breakwall shouted goodbye.  I really wasn't expecting it and got so choked up I couldn't talk.  My eyes misted as it hit home.  I'm off…  And, I won't be back for three months or more.  Wow, what an incredible feeling and one that is hard to explain.  I felt a mix of total excitement and incredible fear for what is to come next.  I was also grinning from ear to ear…

I had Joe and Corina on-board to take pics and help get the mainsail up and before I had the chance to say goodbye they needed to get off.  Goodbye last human contact for a while…

Cruising just under mainsail I made my way out the harbour and over to the start line.  Ten minutes later I unfurled my jib and tasked the boat north of my start line and sailed back past the official start boat skippered by my official timekeeper Mark McRae.  At 011.21.

03.21 GMT I crossed the line to the shouts of joy and good luck from surrounding boats, pointed my boat south and off I went.  It wasn't until I looked over my shoulder some time later that I noticed there were well over 50 cars up on the lookout to see me off.

Thank you every one for making that moment so special and memorial.

A small flotilla of yachts accompanied me towards the end of King George Sound, almost an hour later the last boat turned back.  It was then just me, the oceans and Climate Action Now.

Once I cleared the final headland the winds built to 35 knots from the SW.  I put the third reef in so that the boat wasn't pressed and 10 minutes later I was doing 3.5 knots as the winds had dropped back to 25 knots…  So I shook out reef two and continued sailing with three reefs in my mainsail and my small jib partially furled.  Having only managed a scant three hours sleep the night before I cleared off a bunk and had a sleep.

Throughout the night the winds have been jumping from 18 knots to 35 knots so my boat speed has also been jumping around but I am happy that I have been able to lay such a direct line to the south.  I can already notice it getting colder…  Burr.