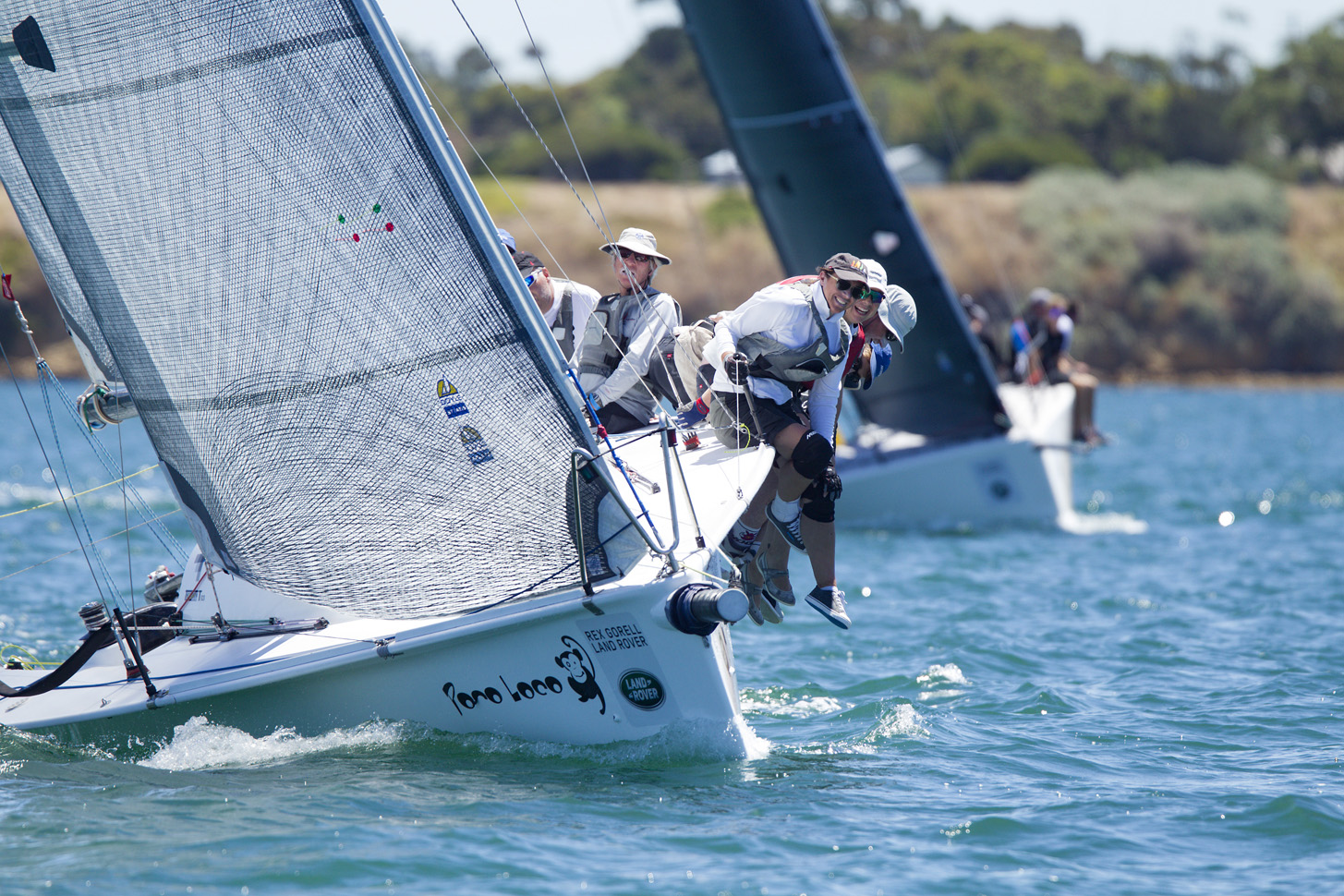 Sunshine and the most wind of the series, 20-25 knots at times, drained the last of the adrenalin from the 220 or so keelboat crews who have spent four days competing on Port Phillip and Corio Bay for a slice of the Festival of Sails 2017 trophy spoils.

A busy on-water program is only one of the festival’s challenges; the other is making it through Royal Geelong Yacht Club’s after hours Shoreside Festival, including live bands well into the night.

Tuesday January 24 signalled the end of the 2017 festival’s key racing component, the event winding down with only the new Off The Beach series, Thursday January 26, Australia Day, to Friday January 27, remaining.

Top Festival of Sails honours and the Bausele Super 11 national title went to Cam Rae’s Geelong based Poco Loco, a sweeter triumph after the local Thompson 920 crew finished second at the 2016 Australian Championship, held as part of last year’s festival.

SSW winds of 23 knots moderated to 16 knots for the fleet that kicked off the final day timetable, the Super 11s at 10am.

“We didn’t do too much wrong; usually in an eight race series you have one shocker,” Rae said. “Overall it’s the best regatta we’ve sailed. The boat was new to us last Festival of Sails, this time we’ve had 12 months under our belt to figure out systems and trim. The boat’s going a lot better than it was a year ago.

“Even though we rate well on AMS we are equally happy we won the Super 11 Performance division. It’s great sailing among all the boats, there are a lot of good yachties in this division.

“We’ll be back next year for the anniversary; the Festival of Sails is one of the regattas we love doing because we don’t have to travel!”

Only once did Nick Bartels’ Cookson 50 Terra Firma drop out of the top tier, after race six today, when they fell in behind Geoff Boettcher’s TP52 Secret Mens Business from Adelaide but still on equal points.

“It came down to the wire, we were only one point in front and in that race we didn’t have a great race and came last but luckily they had a bad race,” Bartels said. “We broke two jib sheets and yesterday we blew the spinnaker to bits. Everyone had a turn.

“Geelong is one of those regattas where the boats are locked into the same sails and we can’t change the boat; and you end up with boat-on-boat racing, which we love. Any mistakes you pay for; any good decisions or good boat handling you get the rewards.

“Normally we struggle in the heavy stuff but today we hung on, the most we saw was 25 knots and boat speed was 20-21. It was pretty quick.”

Second overall Geoff Boettcher’s Secret Men’s Business put up a great fight. “We had them on toast in the last race, then blew a tack line and it was all over. If we’d started the regatta and someone had said ‘would you guys take a second and walk away?’ we would have said no. Failure cost us the race. You can’t pick that, it just happens. “How close was it? It’s a great division,” Boettcher added.

“The tacticians and the trimmers made the boat go fast and in the right direction. It’s been a great long weekend and it’s good to be back at Geelong. We’ve had a little bit of success with a few years in between successes. We really enjoy ourselves. It’s a family affair for us.”

A black flag start made sure the division met the 3pm deadline for the final gun as race officer Greg Sinclair pushed hard to complete the full eight race series.

Julian Newton’s Thompson 8 Game On from South Australia went back-to-back in the Gill Sports Boat Series. They were challenged right to the end by the Viper 640 called Heat, skippered by 15 year-old Tyler Ratcliff, the youngest skipper at the regatta.

“Going in two points clear made for a very interesting day,” Newton said, “We knew we had to win the first to have a red hot chance. We actually broke the tack line block and had the parts in the Esky. We got the block fixed with three seconds to go before the start, and we actually got a fantastic start. It failed again and we knew it wasn’t our race but we sailed as well as we could. We knew every second counted.

“We had a great time in Geelong, to find out on the dock we had a win was very exciting. Awesome regatta by Heat, they pushed us right to the end. It’s great to see a family compete so well,” Newton added.

Wednesday January 25 is the one day break in the racing and shoreside festival, other than Try Sailing 10am – 2pm and the twilight markets at Eastern Beach, before the OTB series rolls out on Thursday.

Dates for the future Festival of Sails have been locked in for the second last weekend in January. The 2018 edition will begin on January 20and the core sailing component will end Tuesday 23.

Next year’s festival is an important milestone – the Sesquicentenary of the Melbourne to Geelong Passage Race, the foundation event upon which the Festival of Sails was born.