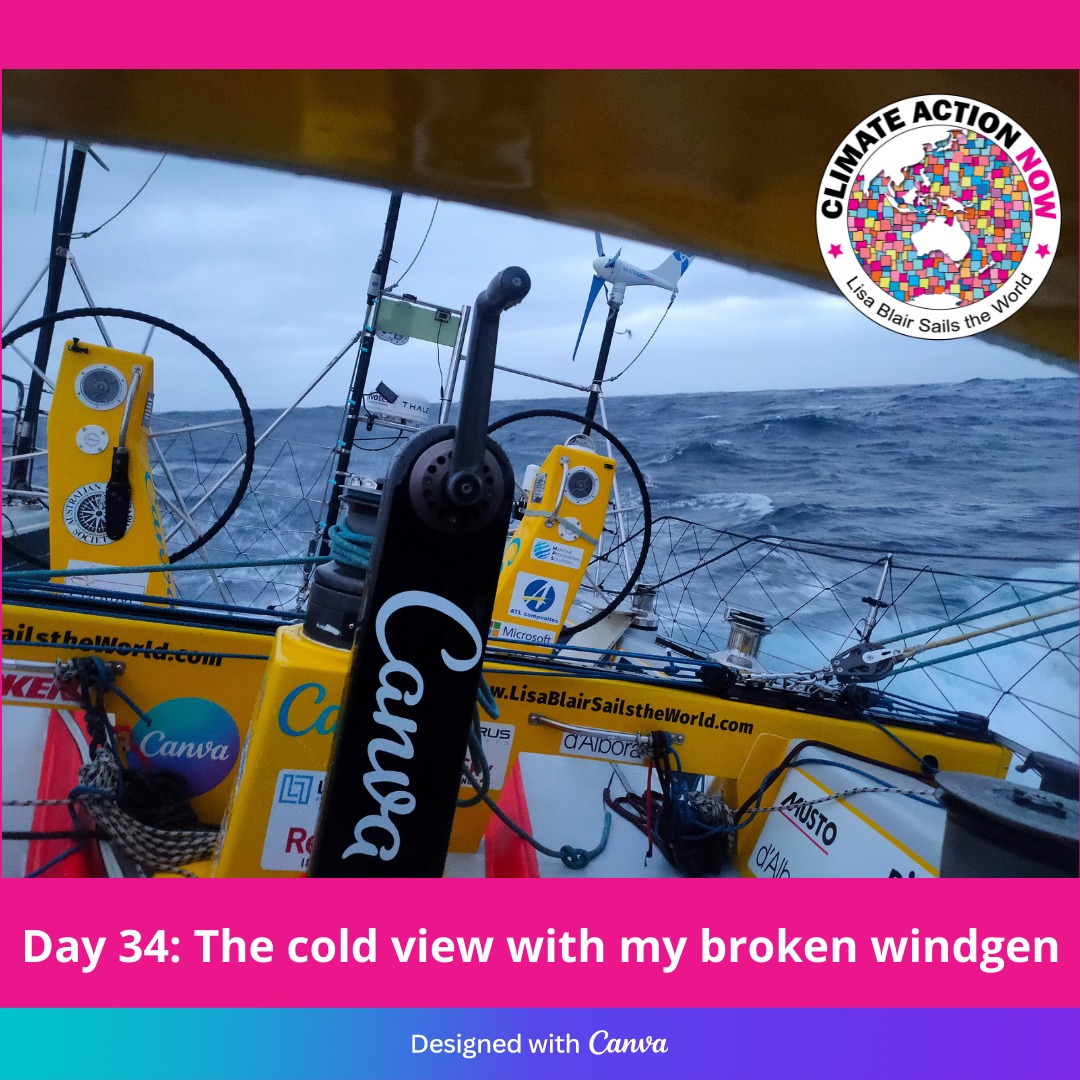 Well conditions remained much the same as what you saw in yesterday’s video for most of the night.  The winds were up at 30-35 knots from the SW and the seas at five metres, so knockdowns were still a regular occurrence.

Most of them were not as big as the one in the clip but there was definitely one or two that impacted just as hard, but nothing else was broken. The hardest thing in those conditions is actually making food because normally there is different ingredients out and I need to juggle them on the countertop, not let them jump off when we get hit and still try to stir the pot or do whatever it was that I was doing.  Last night I made a Mexican chili freeze dried meal, but I also melted some vegan cheese on a wrap for a dipper and I have to say it was a lot of juggling…  But I was able to get it together.

I managed to get to bed around 4am local time so I slept through (waking periodically to check on things) until 12.00pm When I finally got up so I was feeling the most rested as I have felt in weeks, and there was still some daylight left. I went out on deck after breakfast to look around and it was still freezing cold. The seas were quite messy from the days of driving winds, but we were still firing along at a rapid pace.

I have to say, I think that this is some of the fastest extended runs that I have had on Climate Action Now while being solo, so it has been a lot of fun. I have become so use to the feeling of living on a roller coaster that I was shocked when I looked at the speed later this afternoon.  It was feeling like we were slowing down and, in my mind, I was thinking maybe five knots in a lull, when I looked at the B & G display we were actually going 11 knots. I was just so use to it. That use to feel fast to me.

I changed over two time zones today, so I am now operating in UTC -7 which makes my micro plastic sample changes at 9 pm and 11 pm as I need to keep them on the same time zone as Albany. I took the first samples near Albany, and I need to make sure that I have a 22 hour run and a two hour sample run over a 24 hour period of time. The Bureau of Meteorology has also suggested that I hold off deploying any more drifting buoys until I clear cape Horn so that they don’t come to grief on the Chile coastline.

There is some light winds due to hit early morning this morning and last for the day, so I will be trying to go to bed right after this and then sleep until sunrise before setting about and getting as many jobs as I can get done on this day.  On the list is the wind generator blades and the bilge pump as well as cleaning out the bilges and doing a full boat inspection ahead of a rather nasty storm set to arrive on Wednesday.  At the moment Cape Horn is roughly a nine day sail away but we have three storms to get through before then.

So it’s a short blog tonight so I can get to bed and hopefully get loads done tomorrow. Before I go I would like to thank the following degree sponsor.